This morning started at midnight when Harry awoke because he was upset.  We both have no idea why, but occasionally (every 3 or 4 weeks) he has a night where he wakes up half way through and just wants to be awake.  In the end he settled just after 1am.  My alarm went off at 5:30 and there was a bit of a clearing in the sky so I got ready and headed to Mutton Bird Island for sunrise.  After waiting for a while for the light to hit the marina, I came to the conclusion that it may not happen.  I then focused my attention to the eastern sky where there was some interesting colours and rays happening.  I decided to use the walkway up on Mutton-Bird Island for some foreground interest.  Below is a through-the-viewfinder shot. 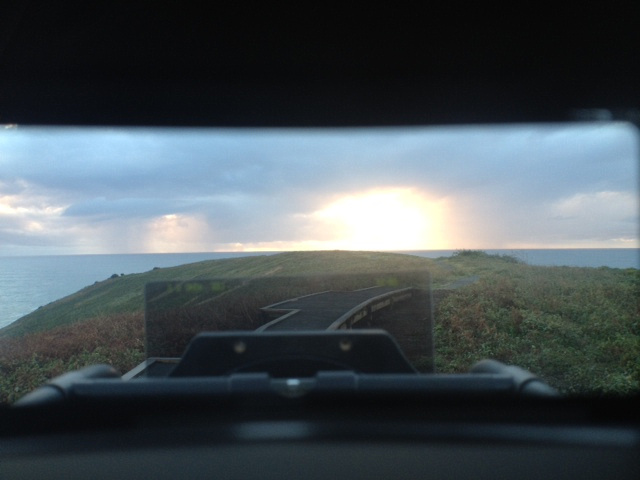 I came home and Cecily and Harry were still asleep…but not for long.  It was 7am and I heard Harry make a few noises so I went and got him out of bed.  He was still quite grumpy.  He continued to be grumpy through breakfast as the photo below shows.  Although he seems really upset, I couldn’t help but to take a photo of his cute little face. 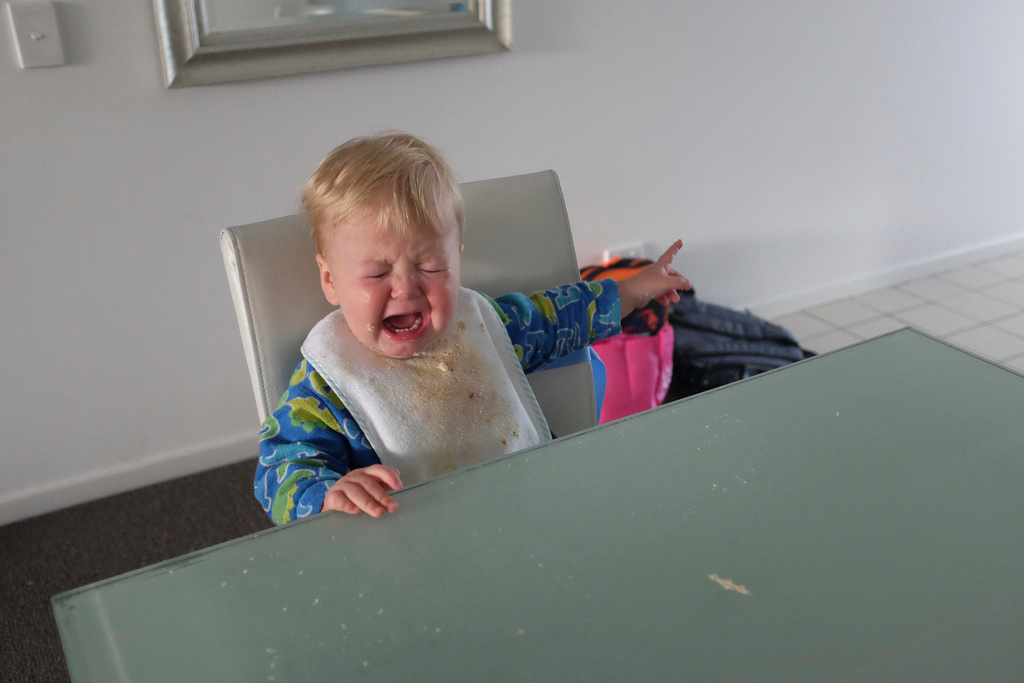 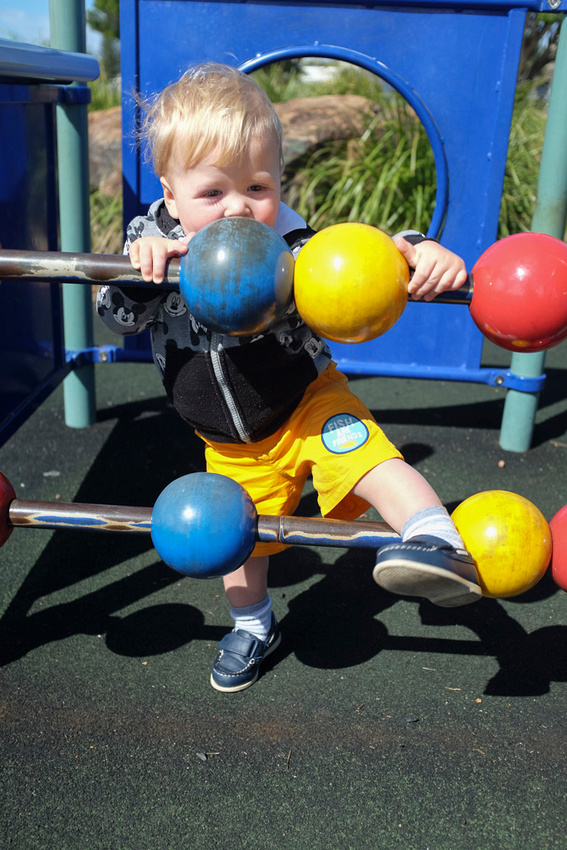 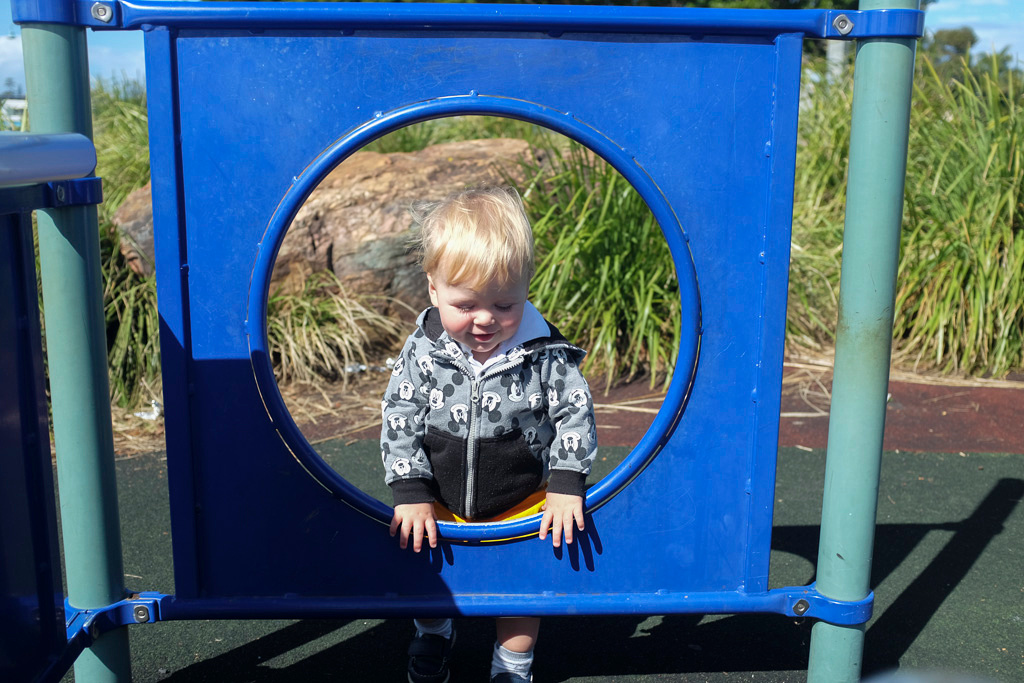 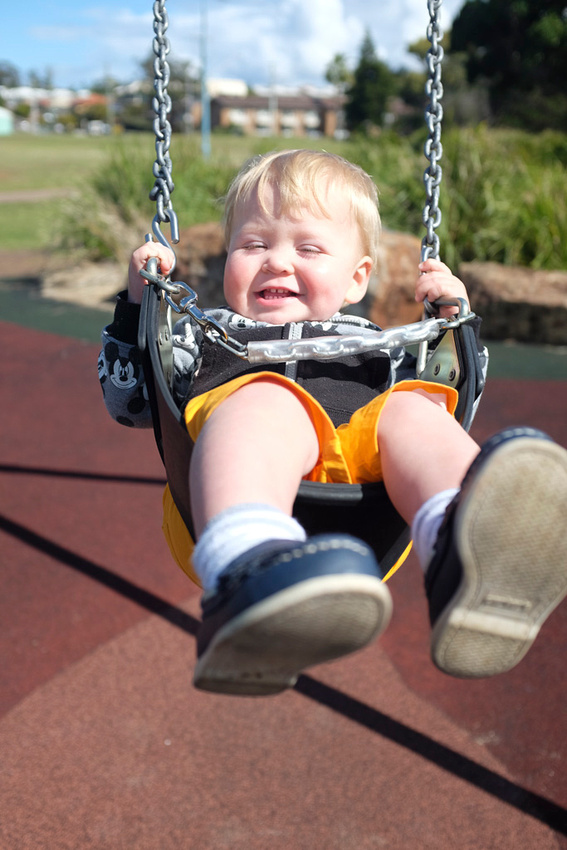 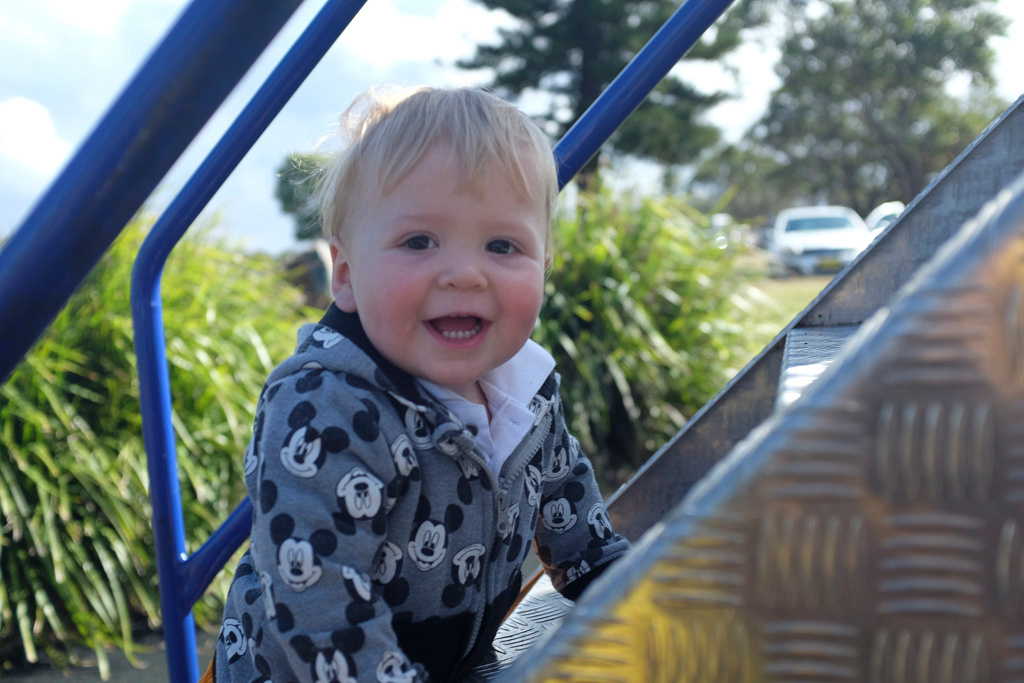 …and we were able to have lunch. 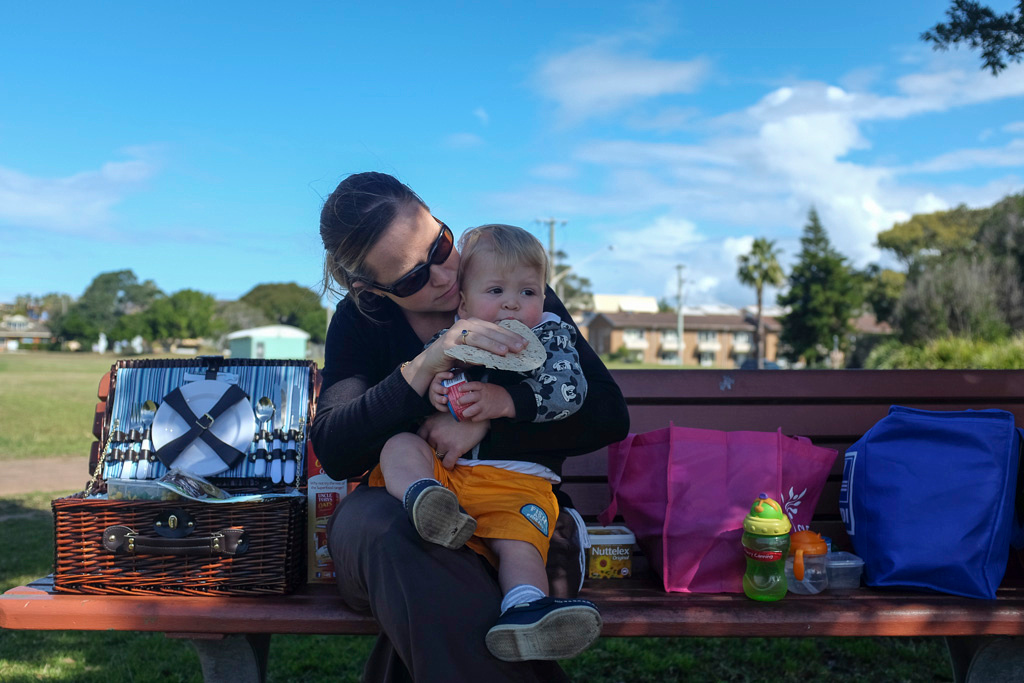 Port MacQuarie seemed like a nice place so we might stay there on the way back.  We arrived in Forster-Tuncurry with overcast skies (surprise surprise) but there was some breaks in the clouds.  We checked into our unit at a caravan park and then ventured out for a walk. 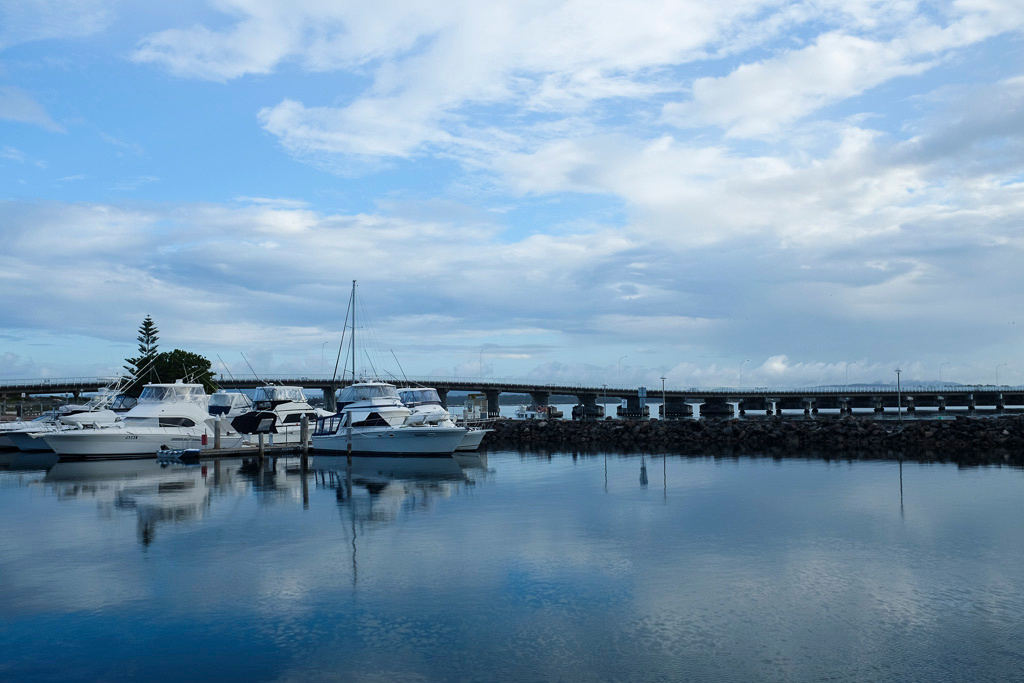 As we walked around it became apparent that the sun would break through.  I had seen the main beach on our walk and nipped back to the caravan park to collect the rest of my camera gear just in case.  The sun came out and I took a couple of shots on film. 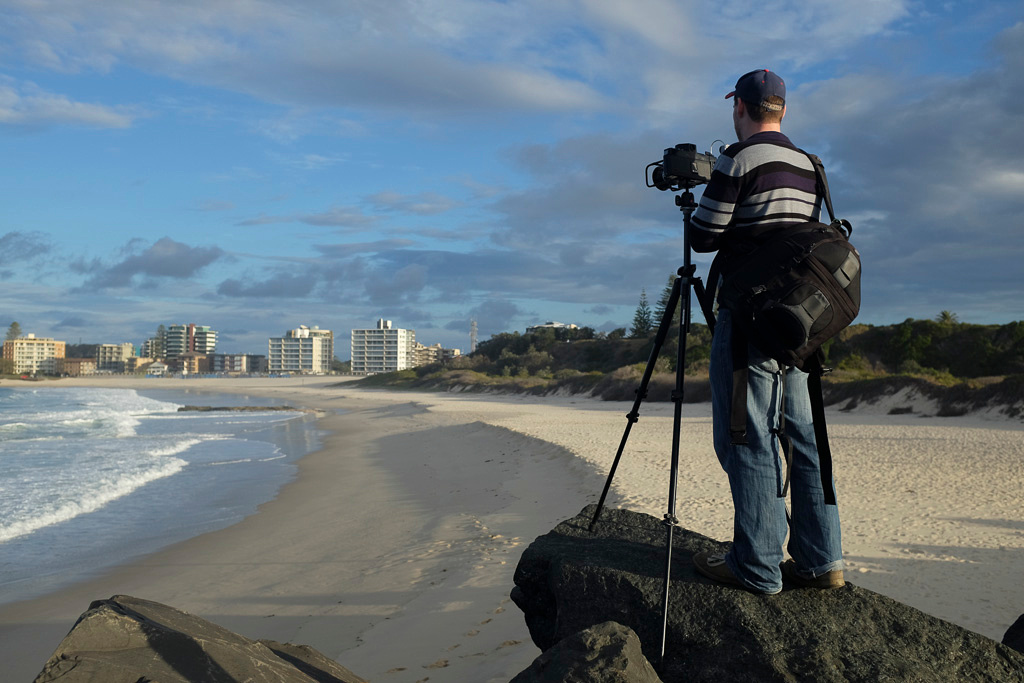 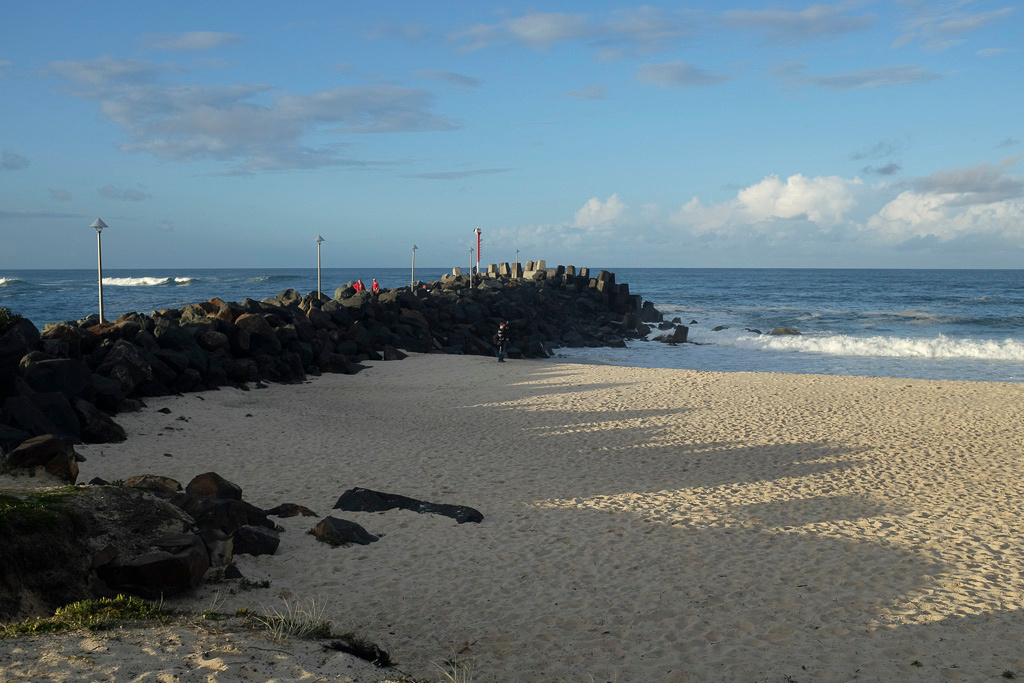 Harry spent some time playing on the sand. 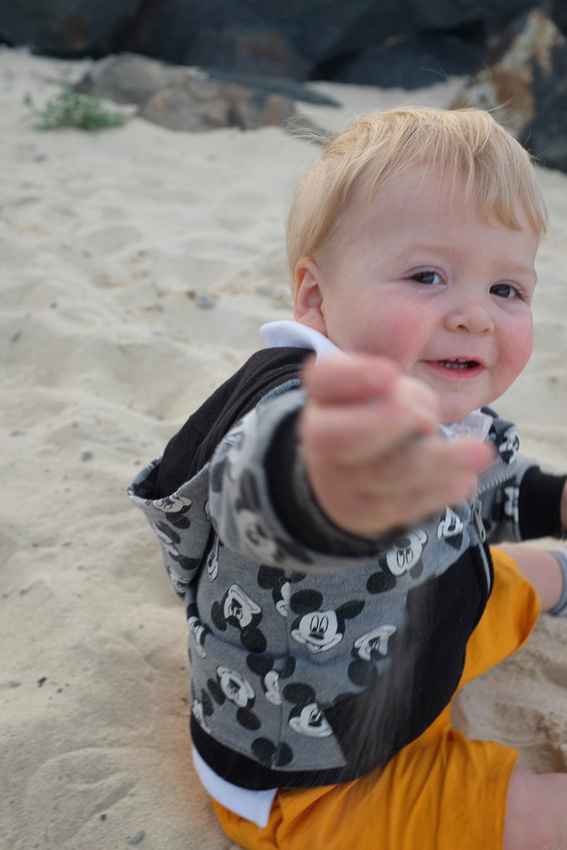 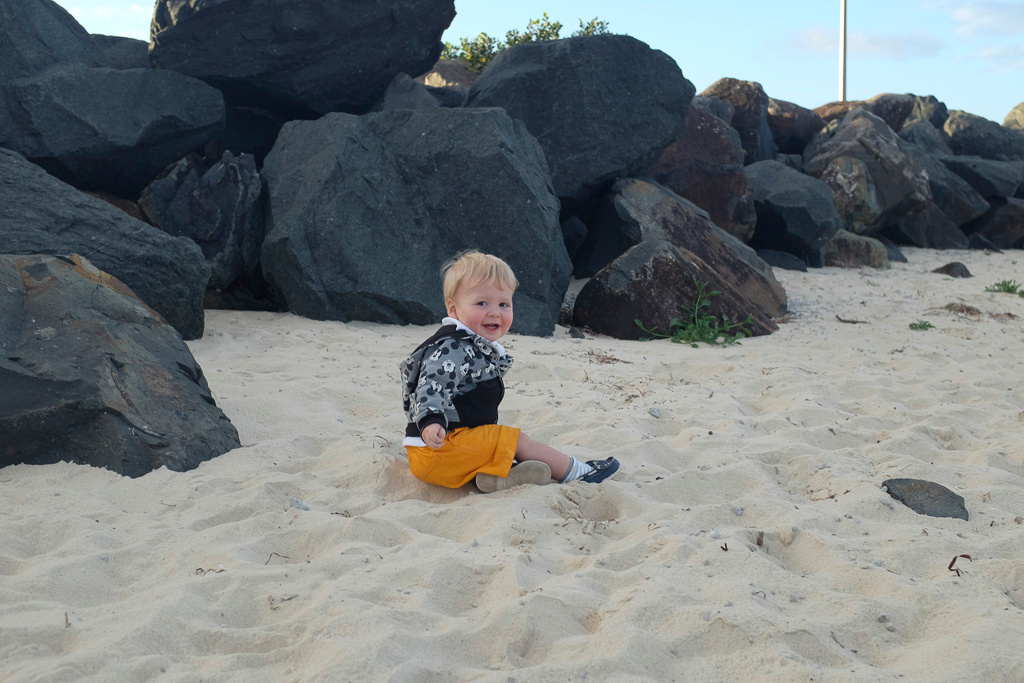 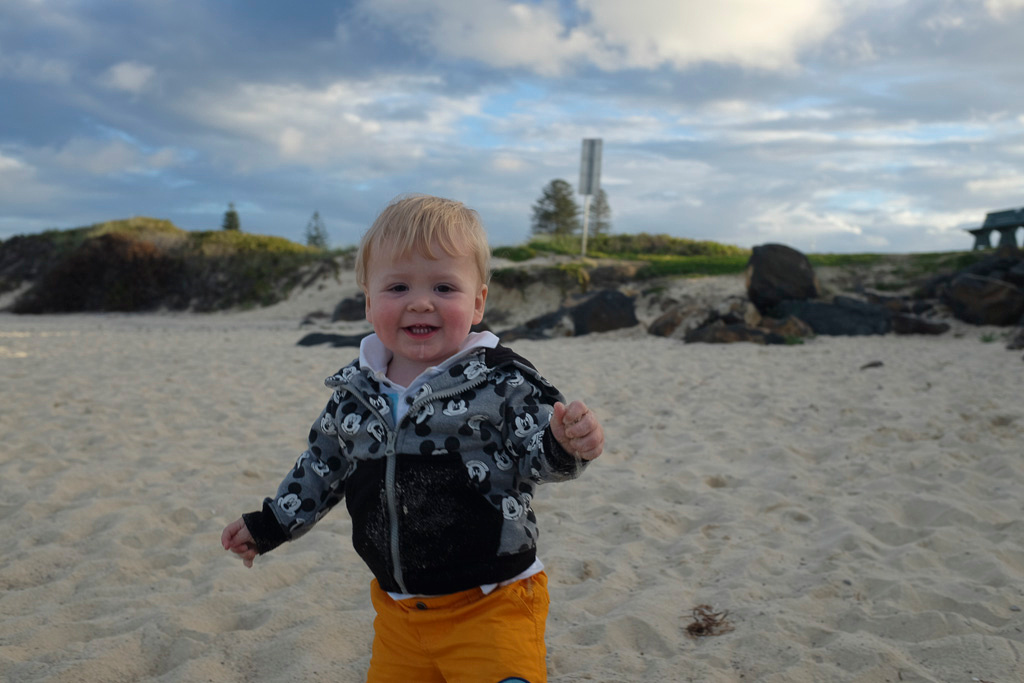 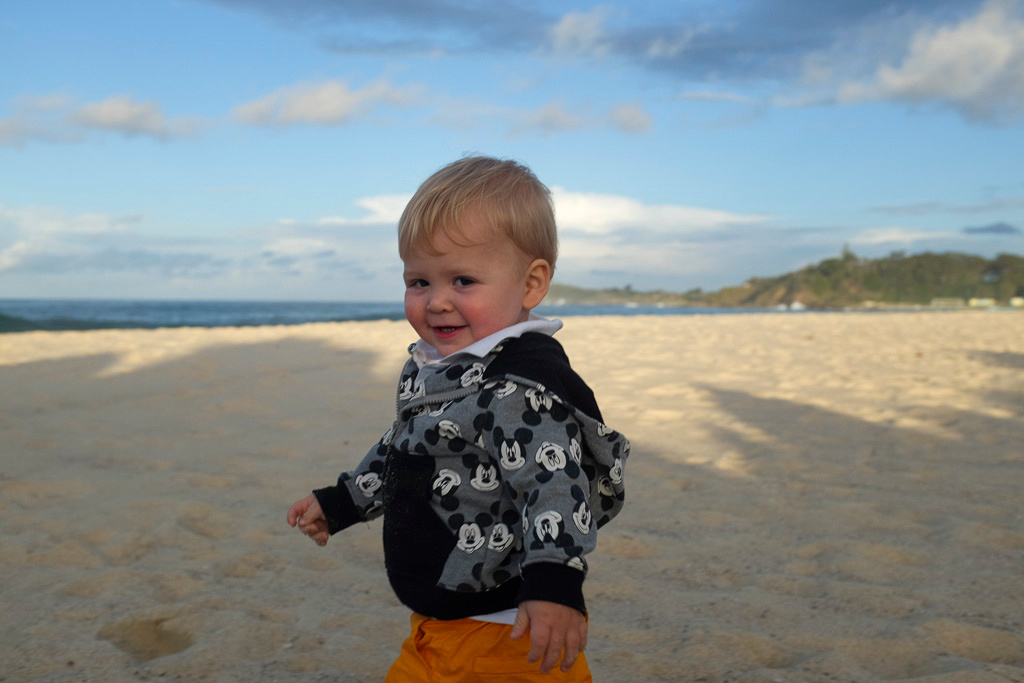 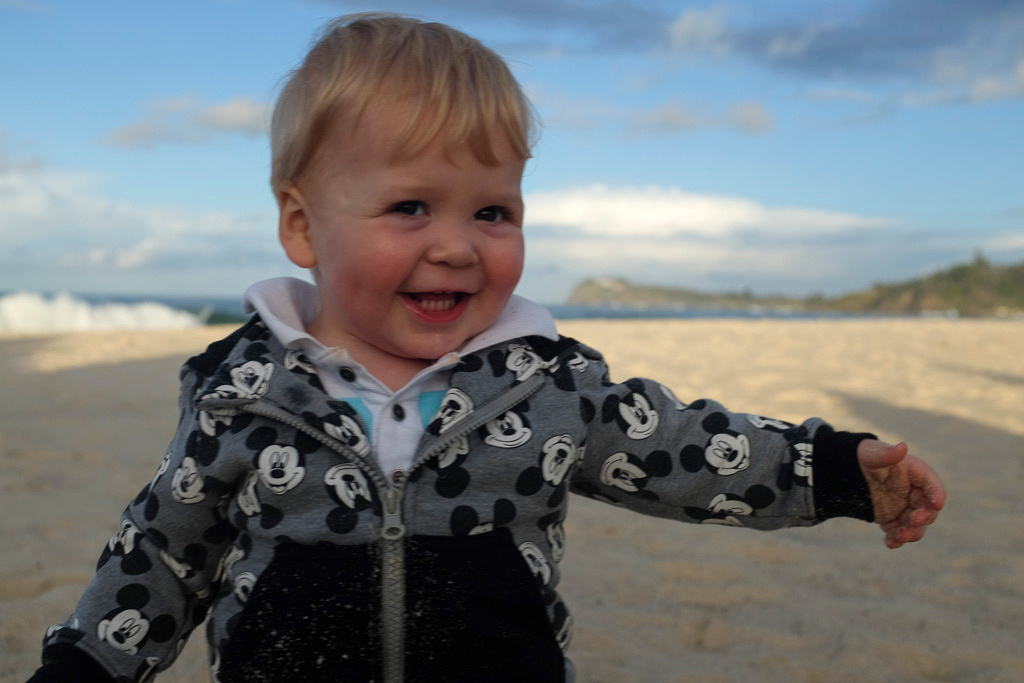 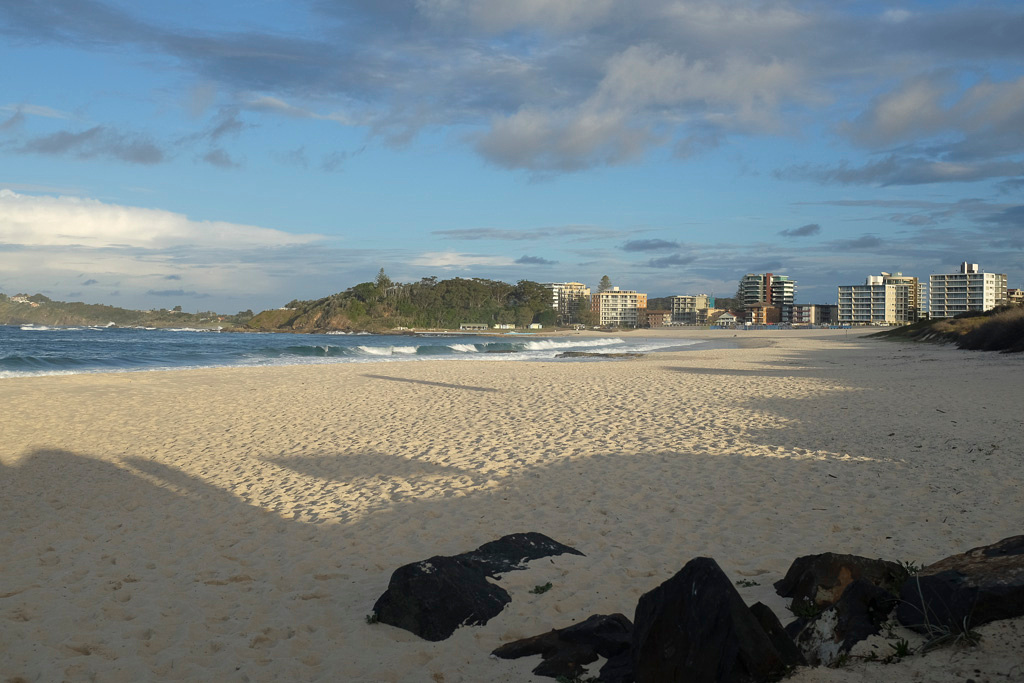 Around sunset we watched a few fishermen catch some fish and we watched a flock of pelicans fighting over the remaining fish guts. 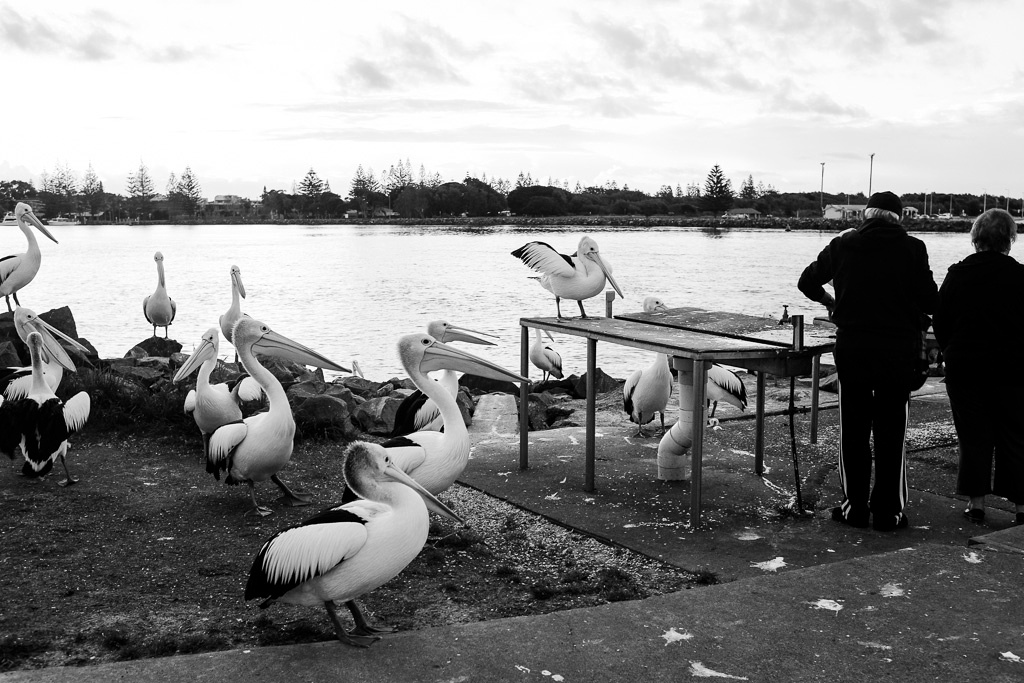 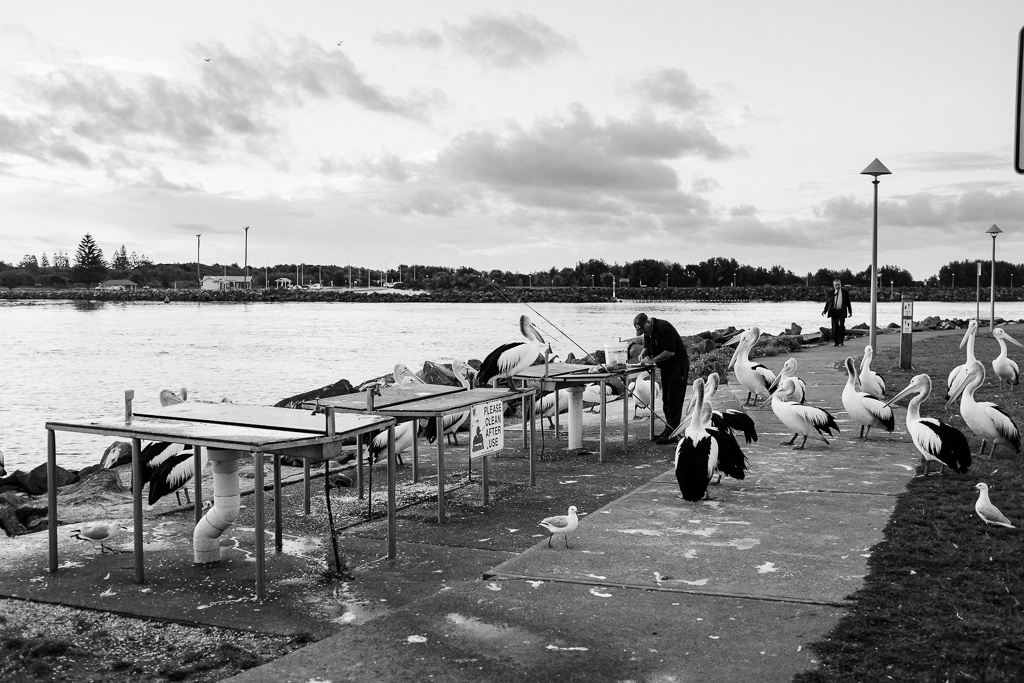 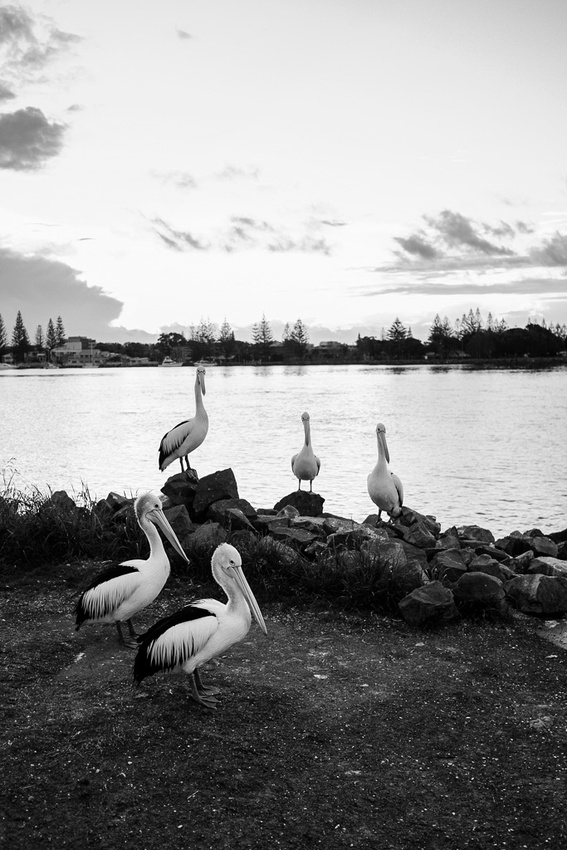 Just as we were about the go back for dinner Cecily saw a pod of dolphins playing!  We stayed around for about 10 minutes to take some photos and then headed home for dinner.  The best of the dolphin photos are on my other camera and I still haven’t bought a CF card reader to access them. 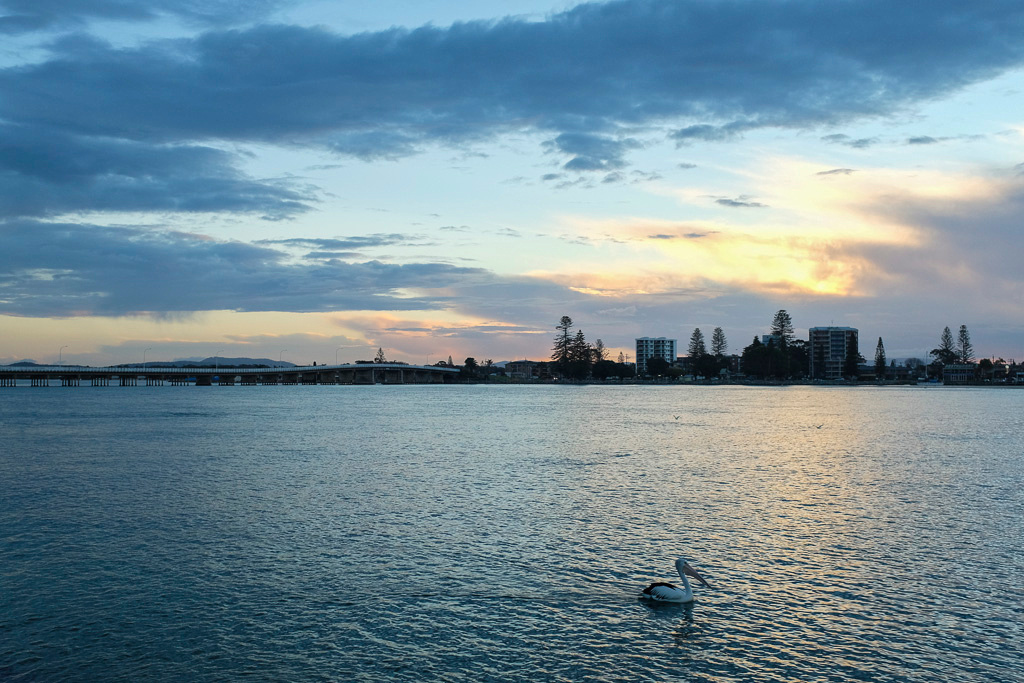 Before bed tonight, Harry pulled out most of the pots and pans and utensils to play with.  He was pretending to cook things in a pot.  He would take the lid off the pot, place some water in (using his closed water bottle) then stir it with a utensil, put the lid on, leave it and then check if it was ready!  He was so cute! 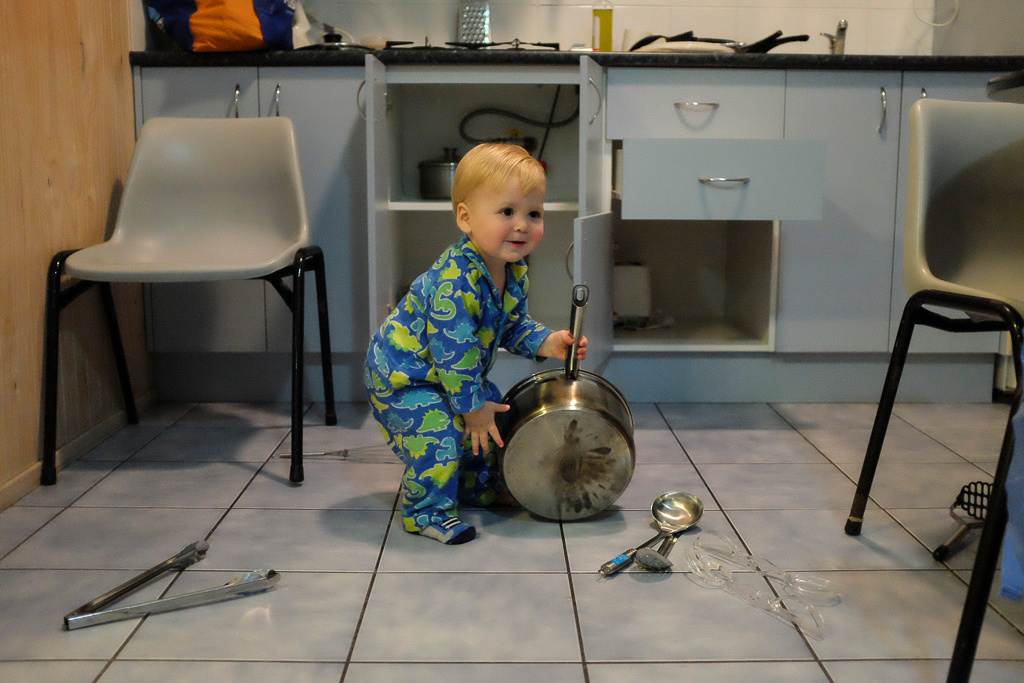