Well today marked Day 1 of our (not so) planned 3 week road trip down the coast from Brisbane to Sydney.  I have decided I will try to do a blog each day on our activities and share some photos of what we have been up to.  Who knows if I will be able to keep up – this could be the first and last blog I write!

The other difficulty with writing a blog is being able to capture some photos which help to tell a story.  Currently I am focused, usually, on just capturing landscapes.  I hope during this process I will be able to improve my story telling abilities through my photography. 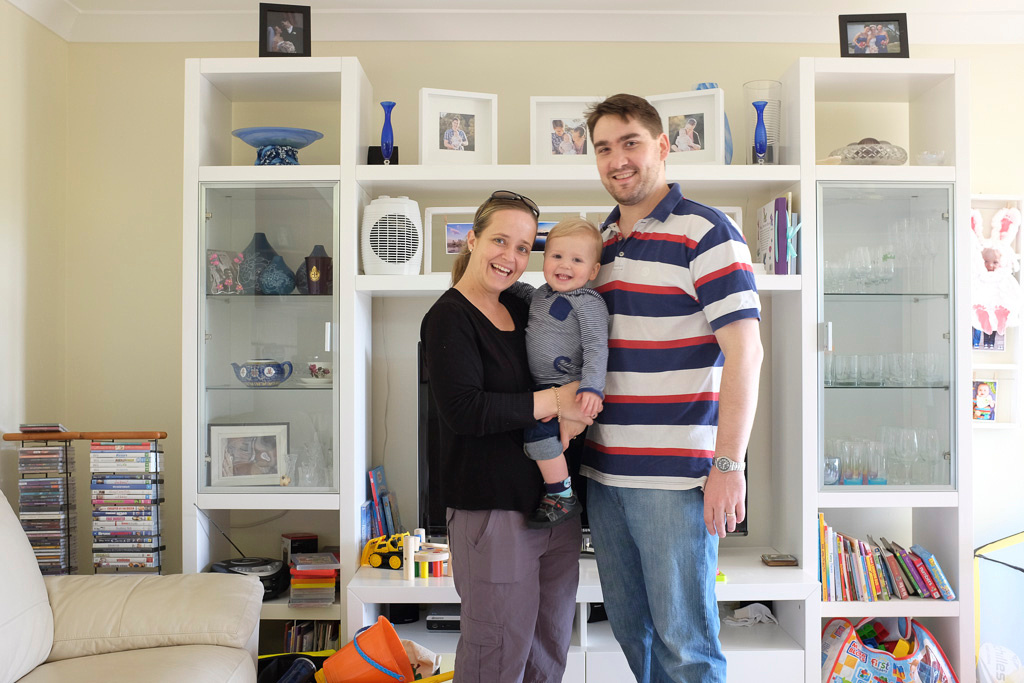 This morning we left at 10am.  We were planning to leave at 8am, but due to the fact last night we couldn’t find accommodation at Byron Bay that was not a minimum of 2 night stay, we had to finalise our packing this morning.  To ensure I don’t forget my film I left a few notes in the car last night. 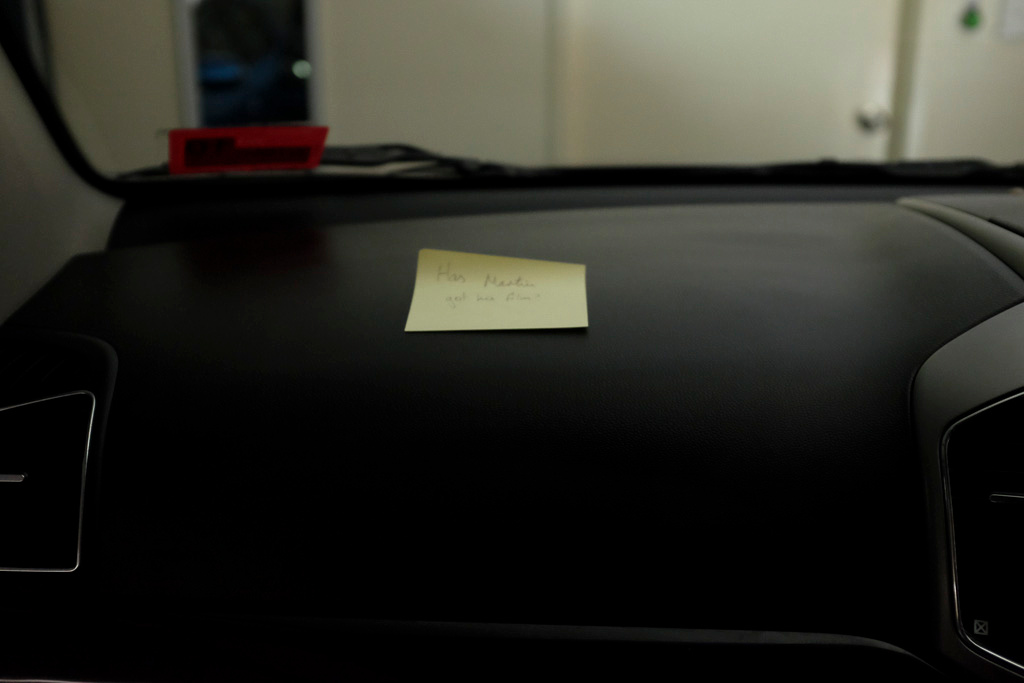 I did struggle a bit to fit it all in….but in the end I did! 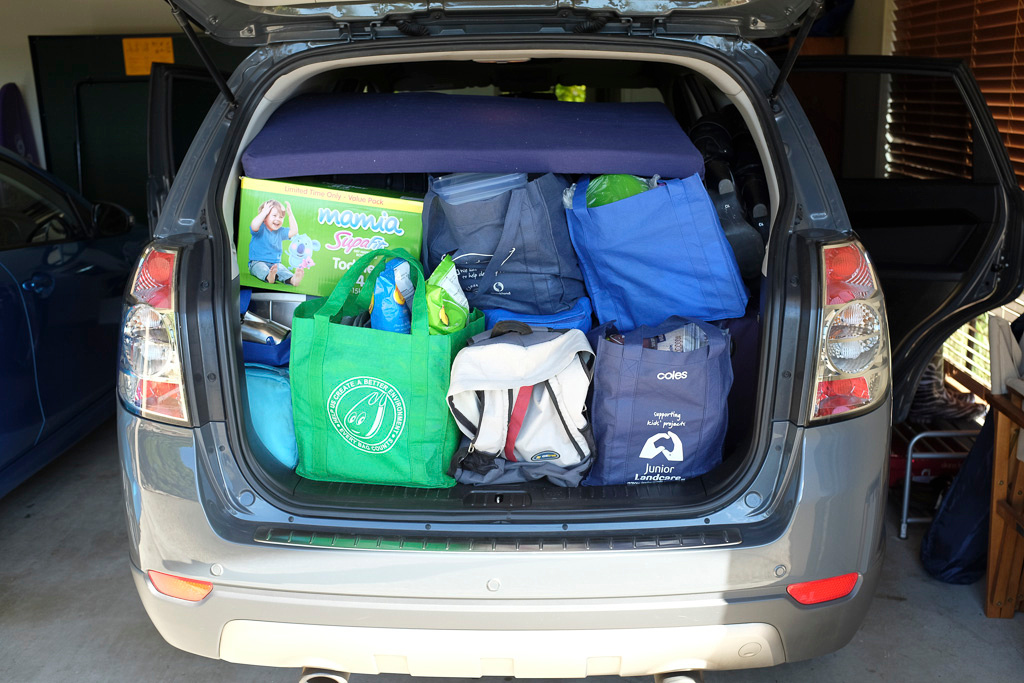 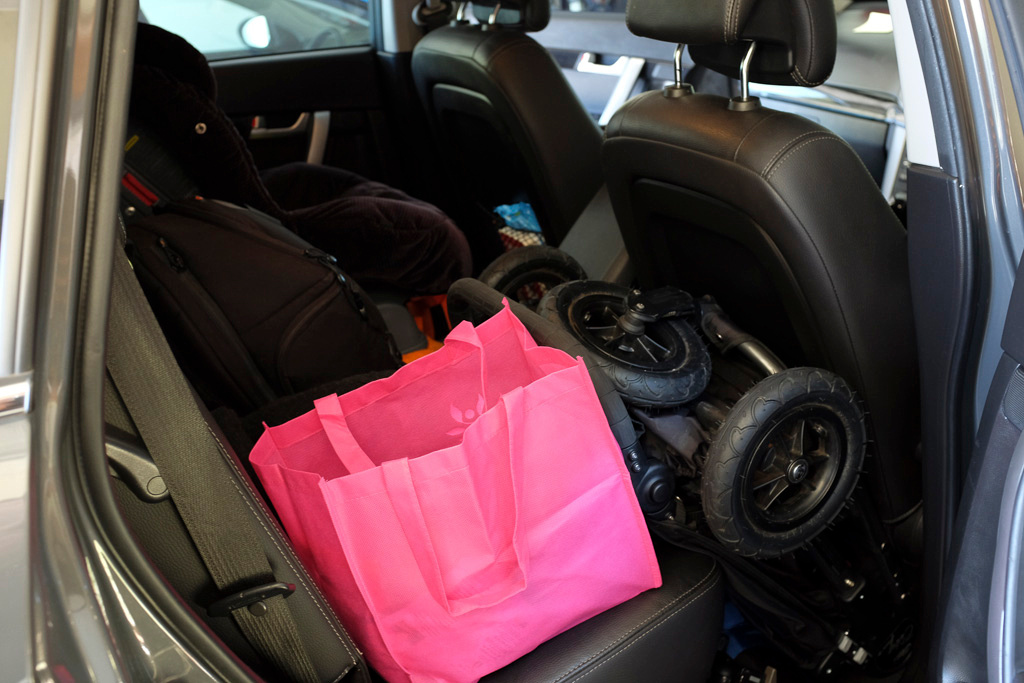 We got away at 10am and called off at a few stores along the way to pick up some last minute bits and pieces.  We also went to Merlo to get some ground coffee for the trip and a coffee each.  Our first port was Kingscliff, just over the NSW border.  We had planned to have lunch here.  Fortunately, Harry slept most of the way down to Kingscliff.  The weather as we traveled down was looking quite nice, but as soon as we crossed the NSW/QLD border the skies turned grey and rain threatened.  We pulled off at Kingscliff for a bathroom stop and like clockwork, the rain poured. 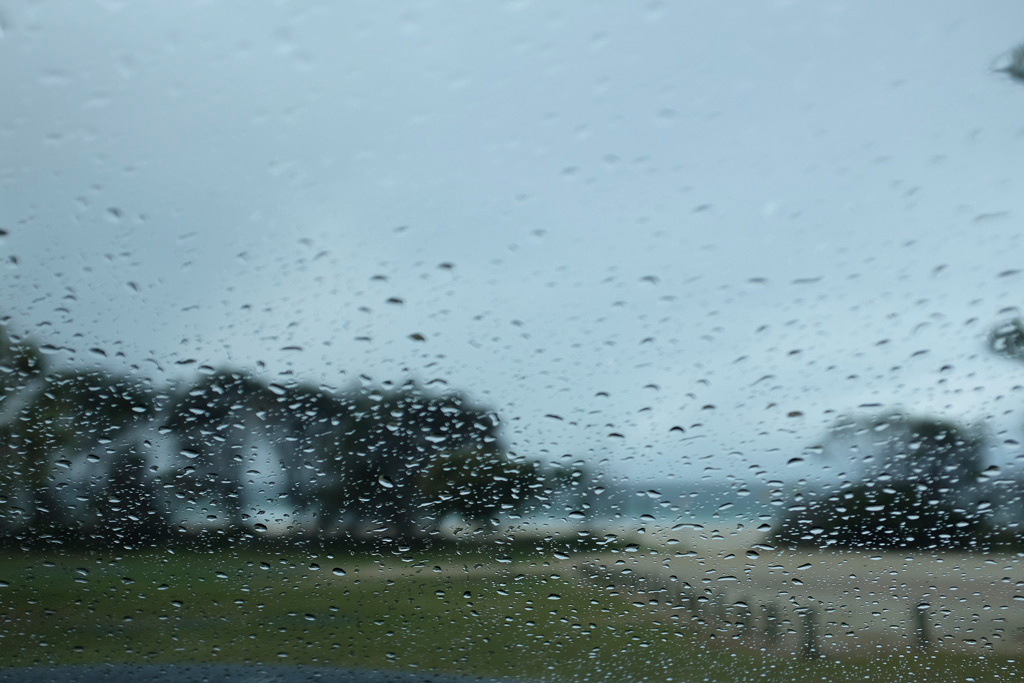 We went to a little café for lunch, where Harry enjoyed seeing a puppy outside as well as feeding Daddy! 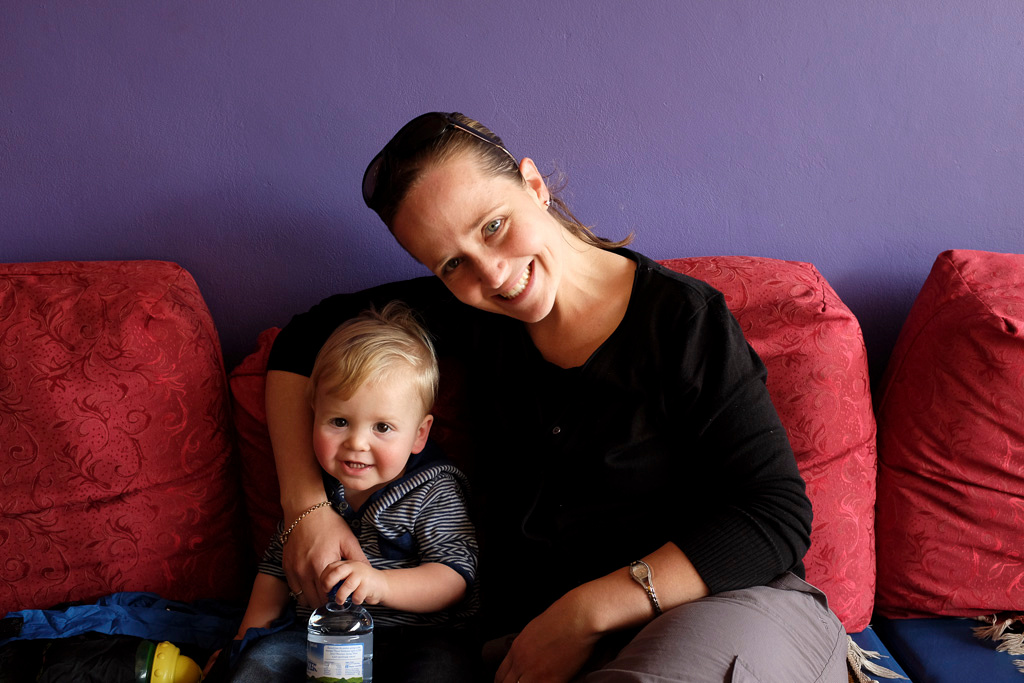 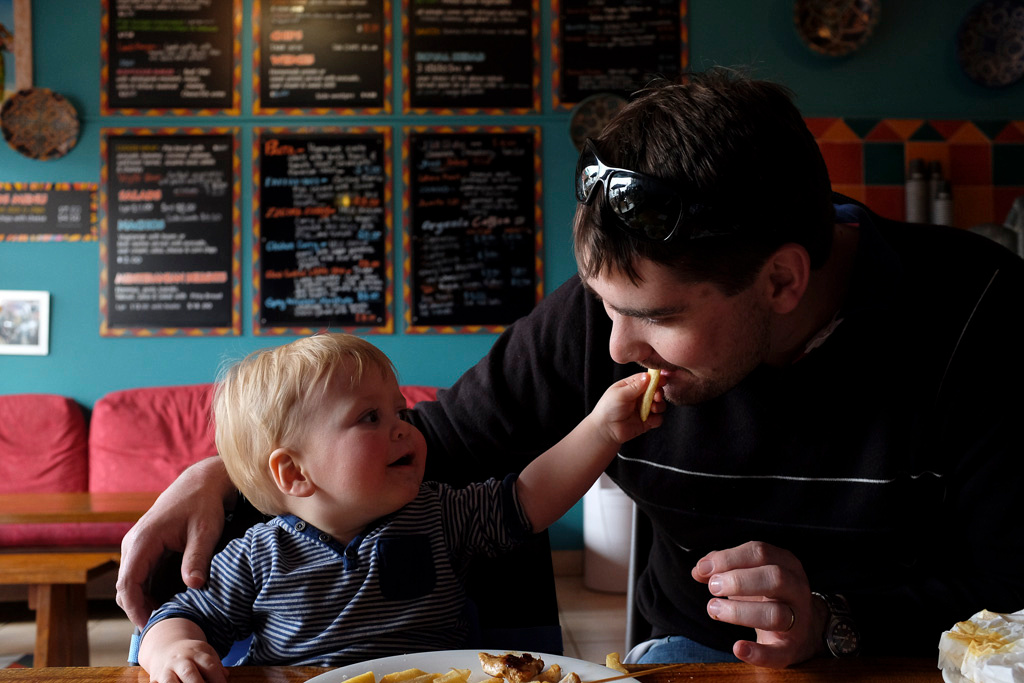 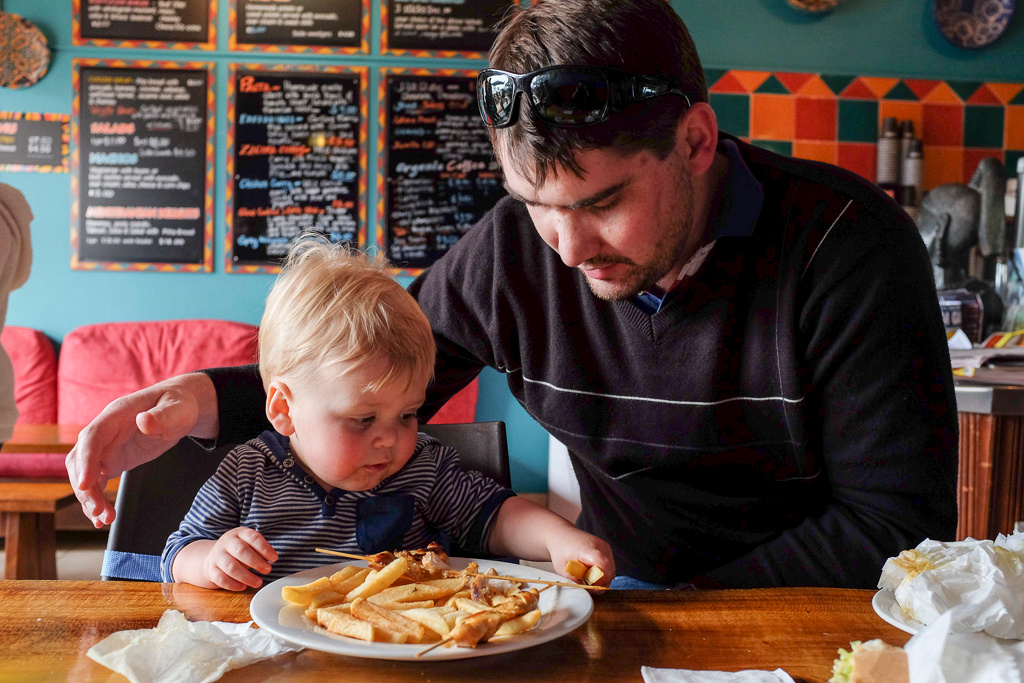 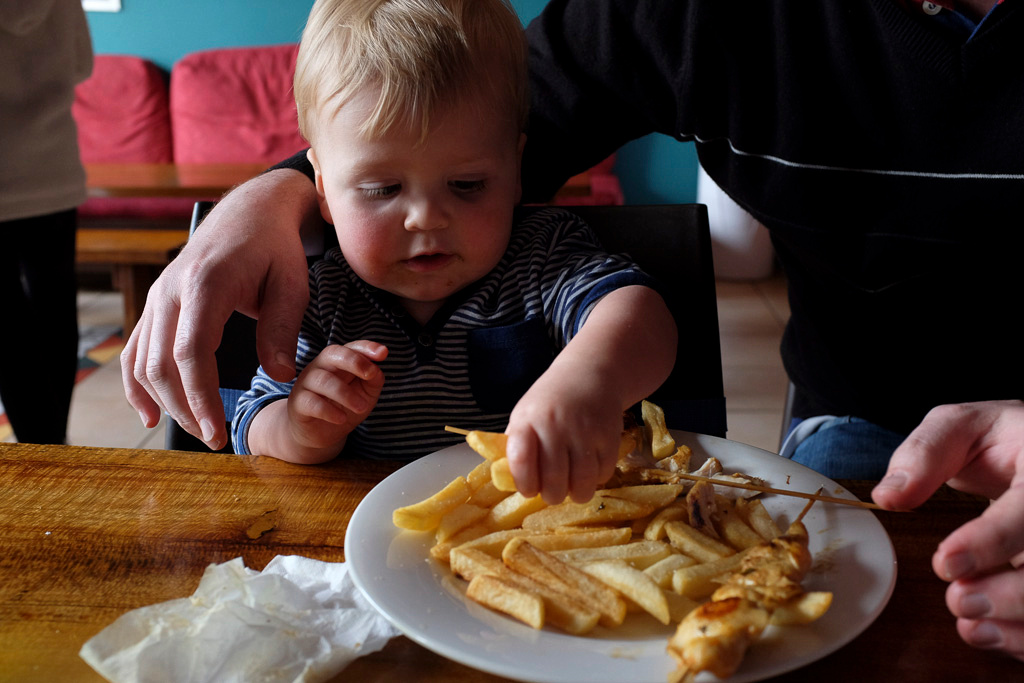 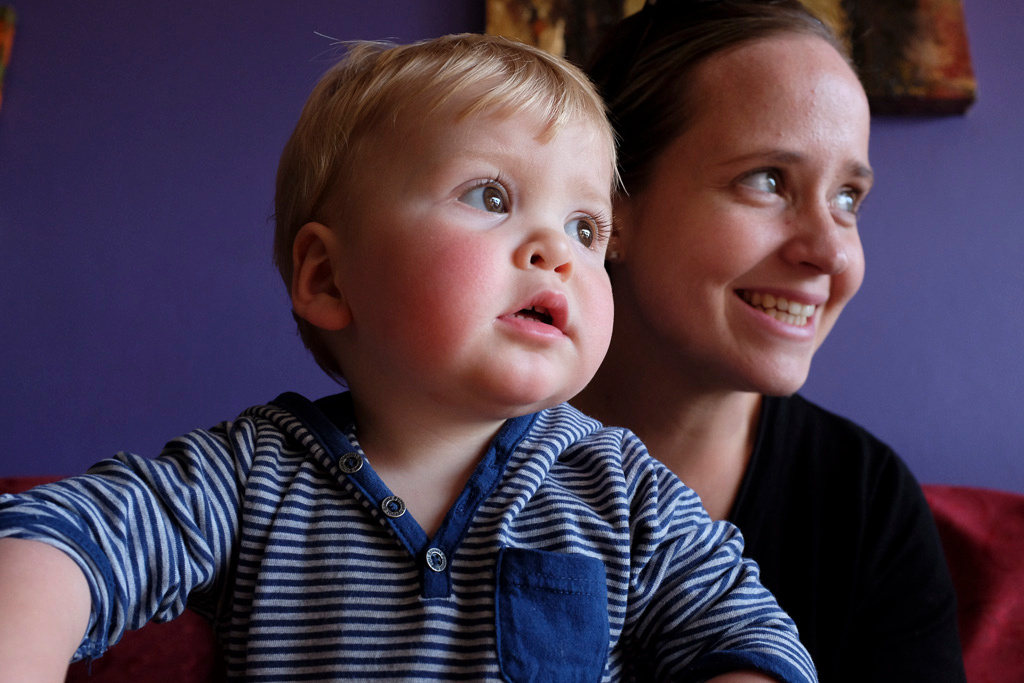 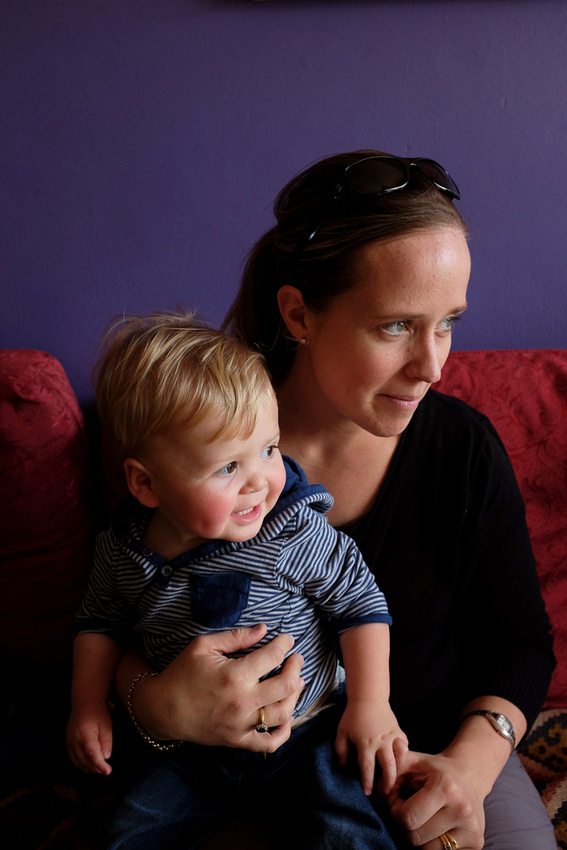 After lunch we headed to Cabarita Beach.  Unfortunately the weather turned bad again.  We sat in the car, waiting for the shower to pass.  We then ventured up to the top of the point.  This short walk gave us the opportunity to try out a new carrier for Harry that we bought on the way. 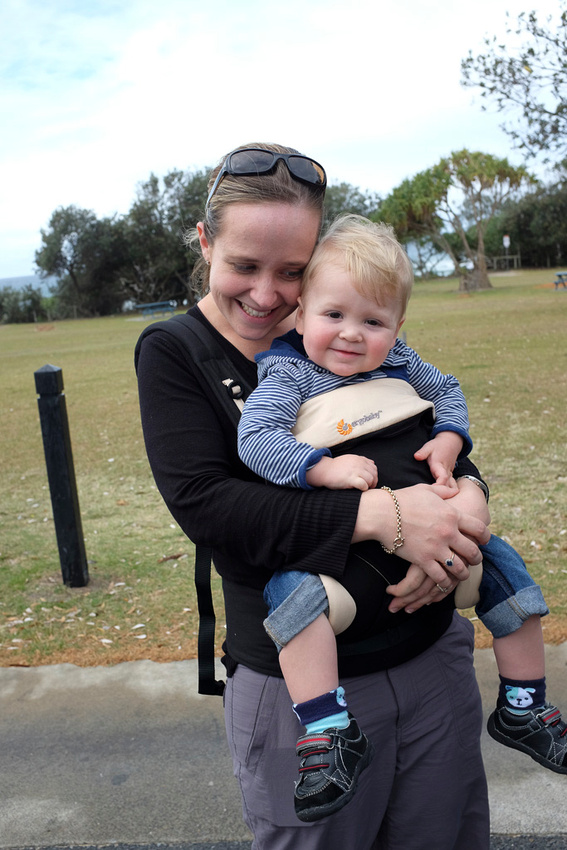 We also came across a motorbike trying to get down a foot path… :S 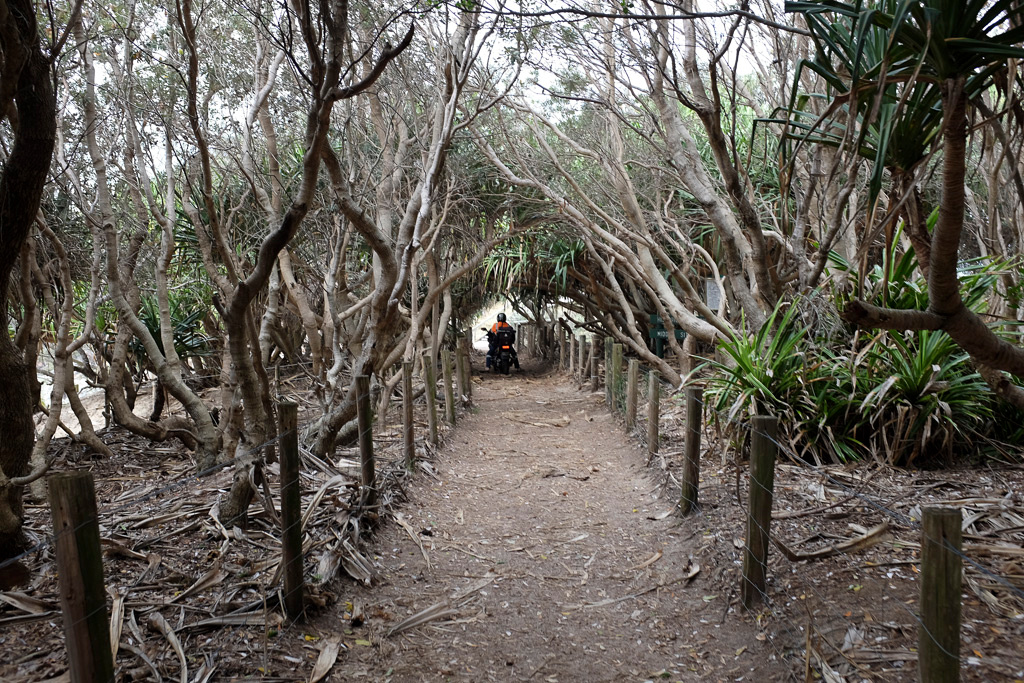 We did make it to the top! 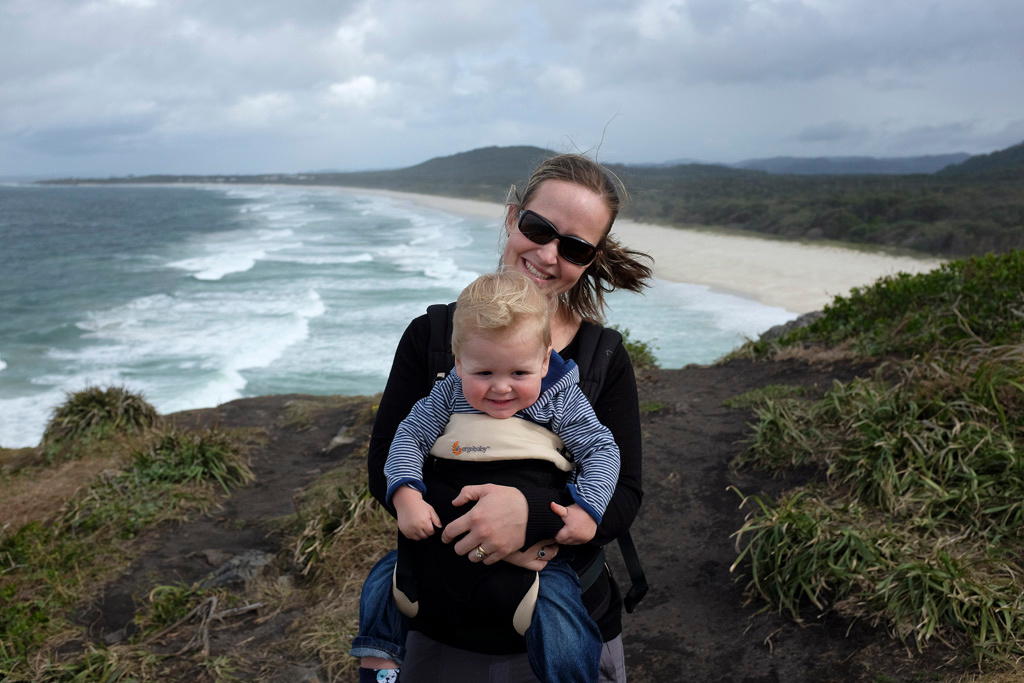 Before we returned to the car we found out that the X100S is no good for selfie’s! 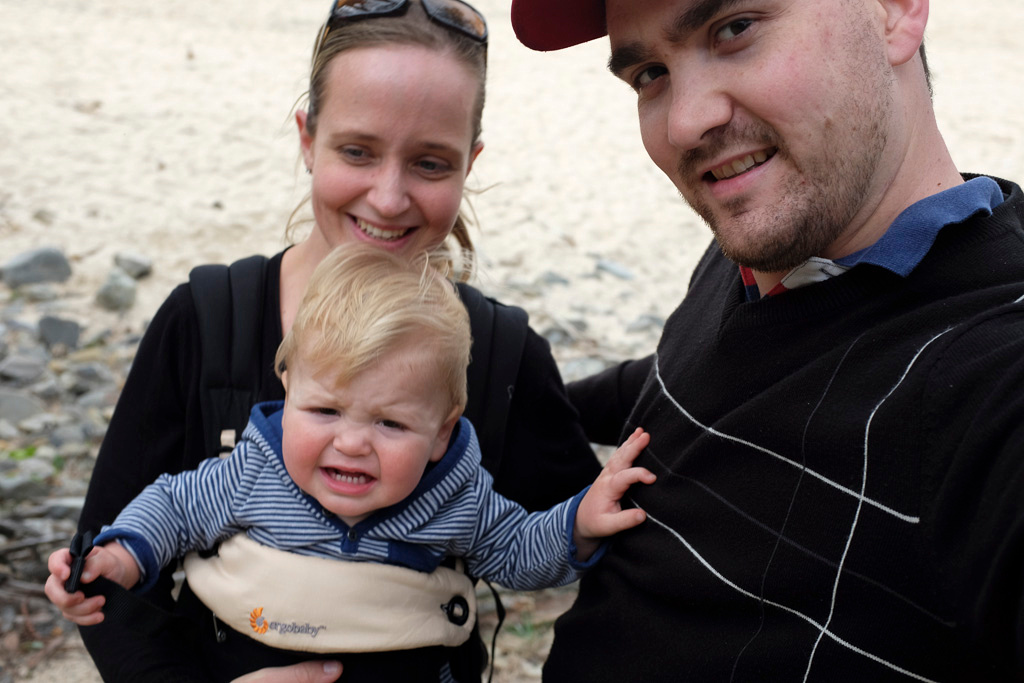 We returned to the car and carried on our way to Byron Bay.  We checked into our accommodation.  We hadn’t planned on staying at such a nice place, but it was all that was available for 1 night!  I thought I’d take some photos of the place, but before I could get to all of the rooms, Harry had made his mark.  He grabbed the lids off the rubbish bins and was moving them around the unit!

We went for a walk around Byron Bay and had a look at the shops.  I was umming and ahhing about whether to head out photographing at sunset.  We witnessed some awesome light in the afternoon along the beach so I decided I was happy with taking some snaps there on the X100S.  Harry had a chance to run around on the beach!  He was having so much fun!  I don’t think he could believe he had found a sandpit which was miles long and he could run around in as much as he liked! 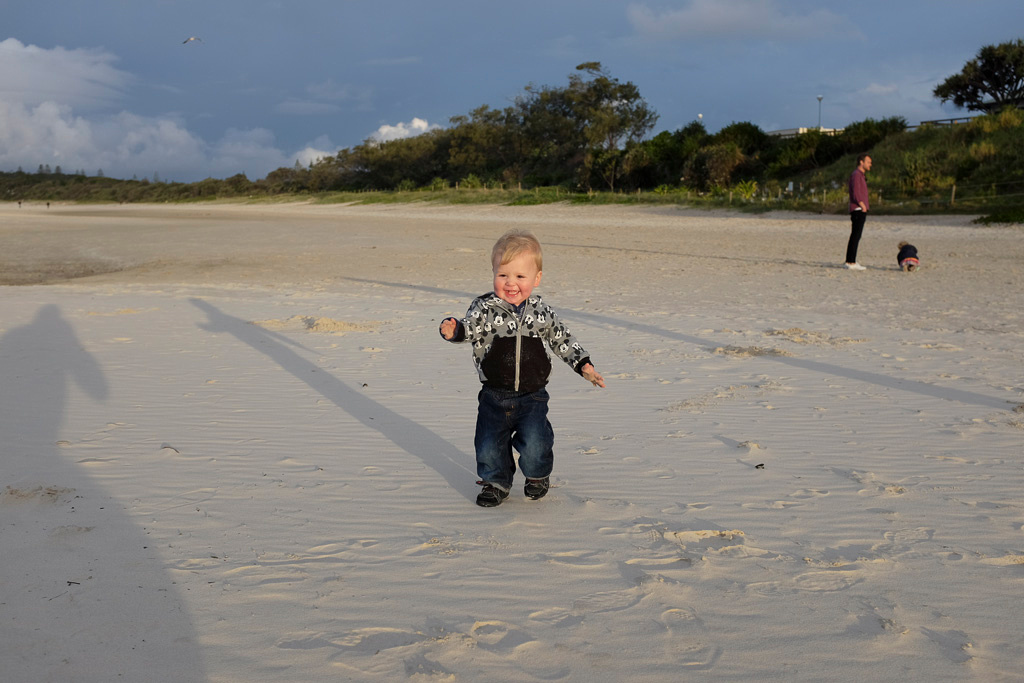 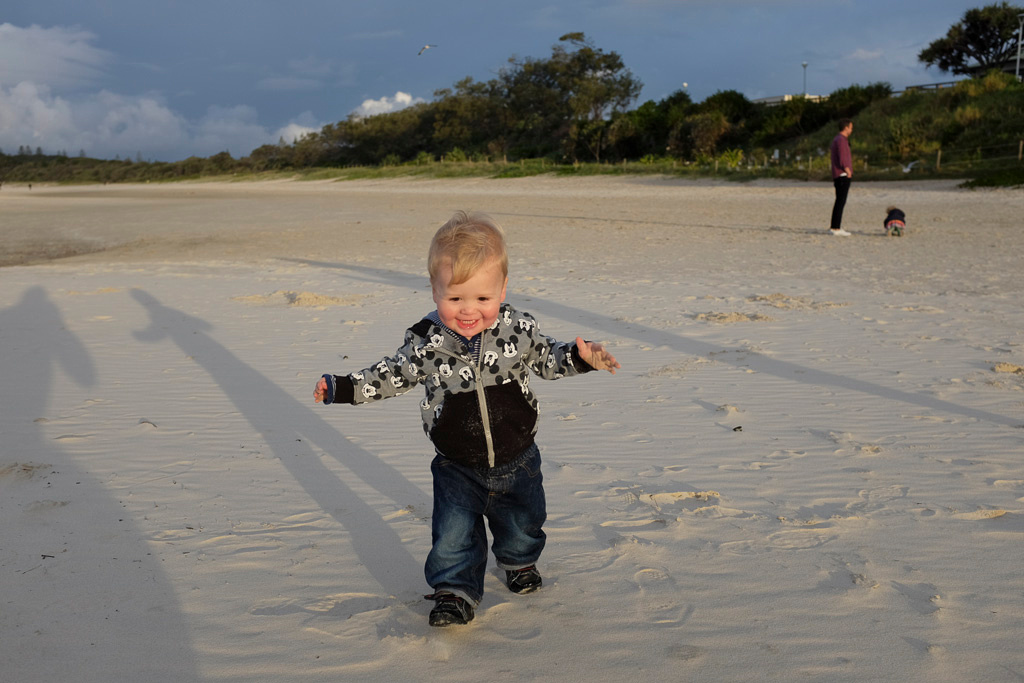 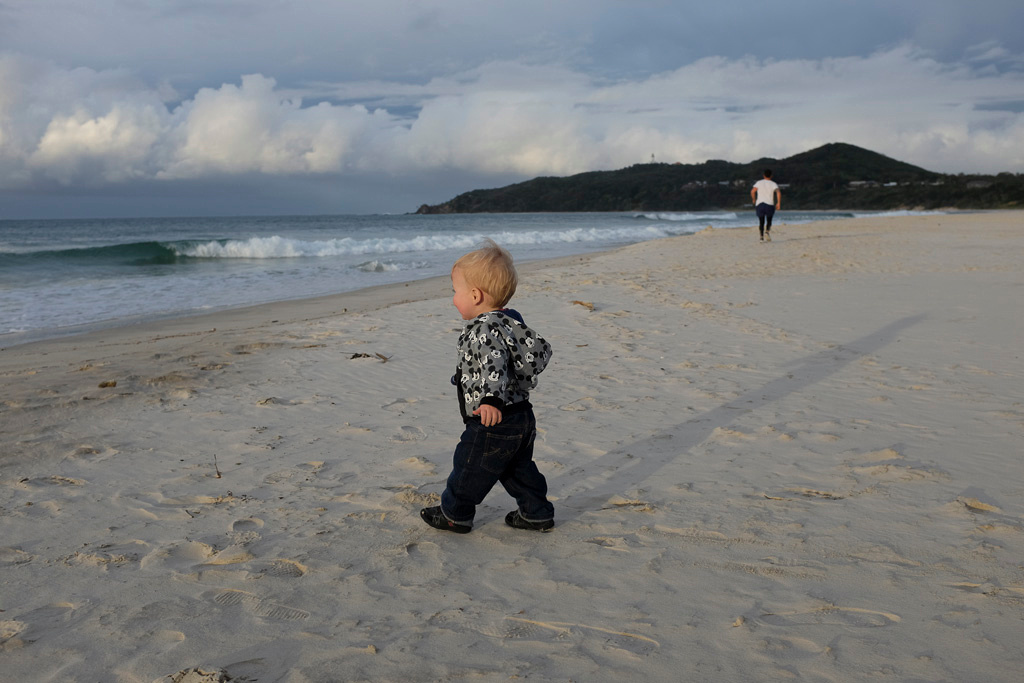 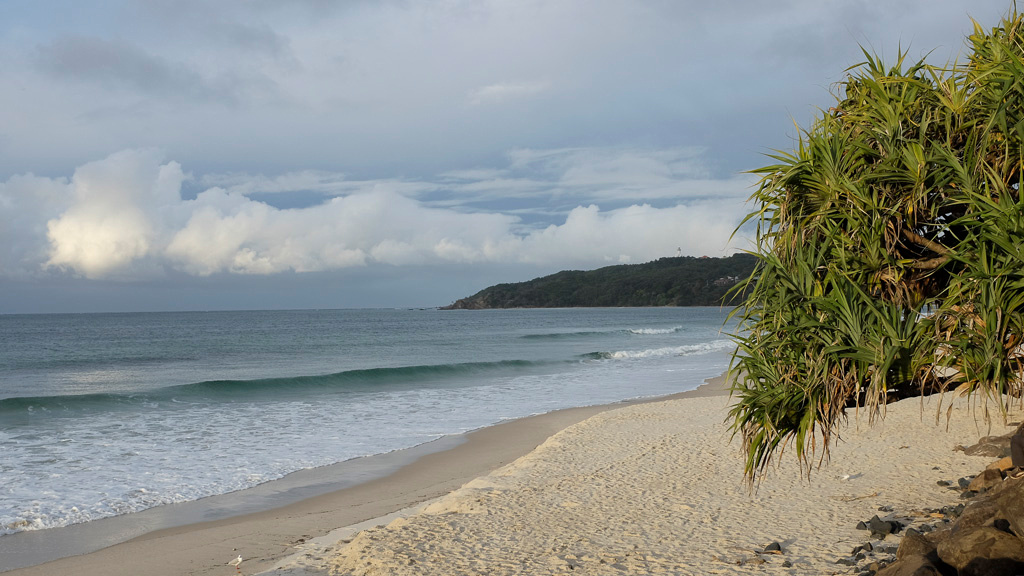 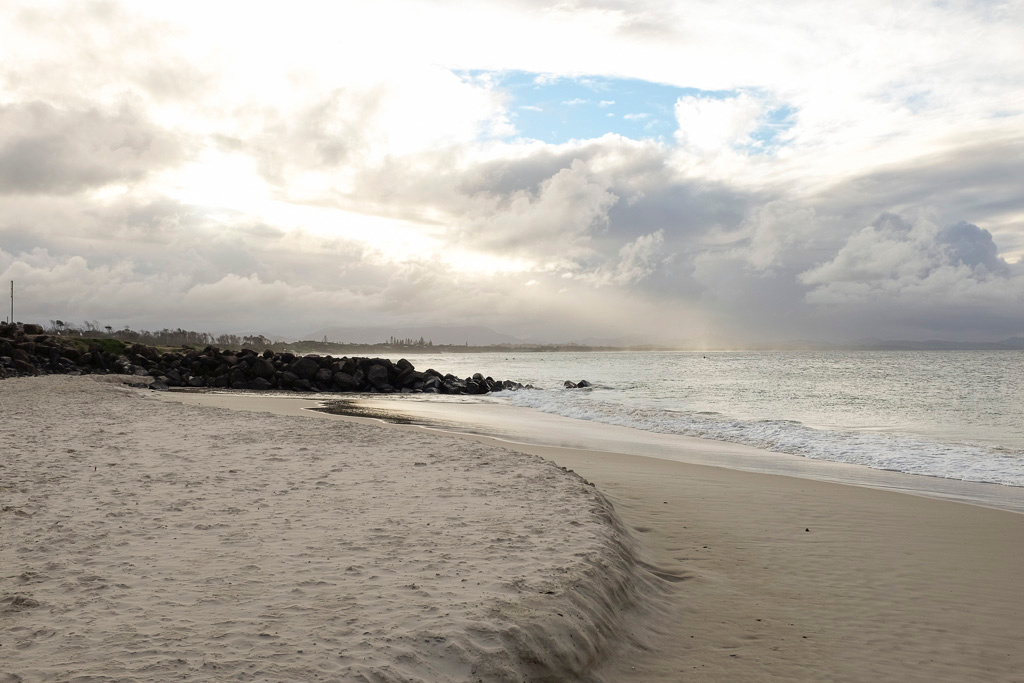 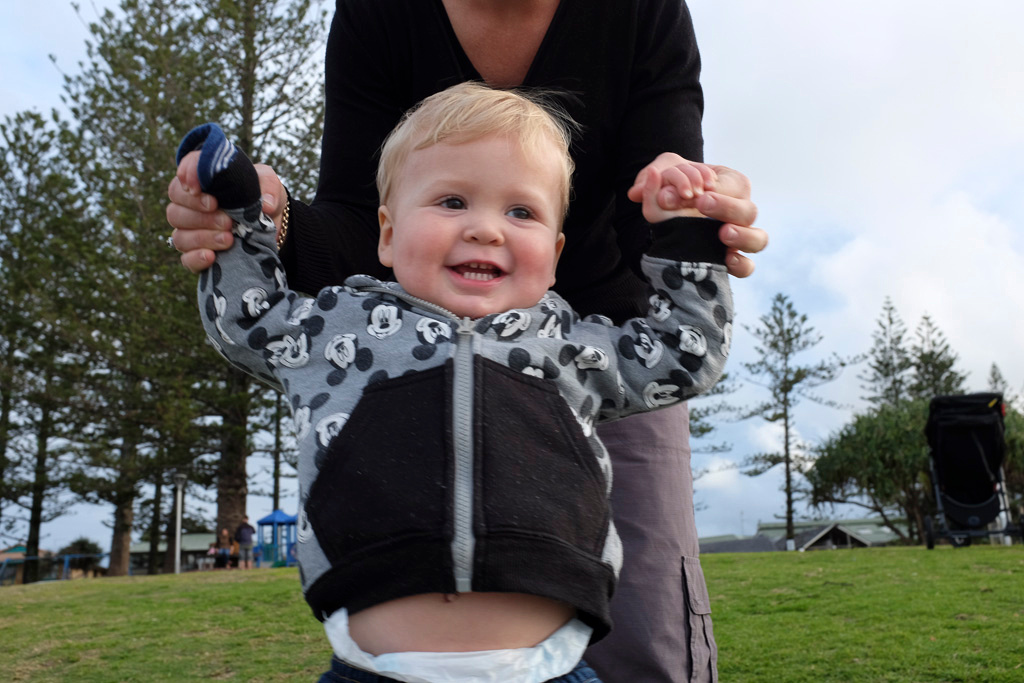 We headed home and I took a quick drive up to the lighthouse to check it out in case I decide to head up there for sunrise in the morning.  In the end sunset was pretty good with some nice pink colours.  I think that if I was there 10 or 15 minutes earlier I would have snapped off a film frame…but I didn’t get chance.