Day 2 – What a washout!  Byron Bay to Coffs Harbour

This morning started bright and early….well not so bright but pretty early.  Harry woke at 5:15am!  Ordinarily at home we would put him back to bed but this morning we let him get up as he was sleeping in a cot in the one bedroom apartment we were staying in.

I say it wasn’t bright as it was raining and overcast when we woke up.  I had set my alarm for 5:20am to get up and photograph sunrise so I was actually quite happy Harry had woken prior.  The sole reason being that it meant I had time to turn my alarm off before it went and I didn’t get into trouble for waking Harry up with it!

About 15 minutes later the rain had settled so I decided to venture to the lighthouse at Byron Bay even though I was unlikely to get anything decent.  As I suspected, it was quite overcast, spitting and nil breaks in the cloud.  It was quite cool though as you could see the line of showers coming across.  Anyway, I took a few shots on the 5DII and decided to go home.  Unfortunately at the moment I can't get the images off my 5DII due to a technical difficulty...so it'll have to wait.

We packed up and set off on the road to Coffs Harbour.  As we drove we just came across heavy shower after heavy shower…actually it wasn’t even showers – it was just rain!  We decided to drop into Lennox Head to see what it was like.  We only briefly jumped out of the car for enough time to take a quick snap and move along as Harry was asleep. 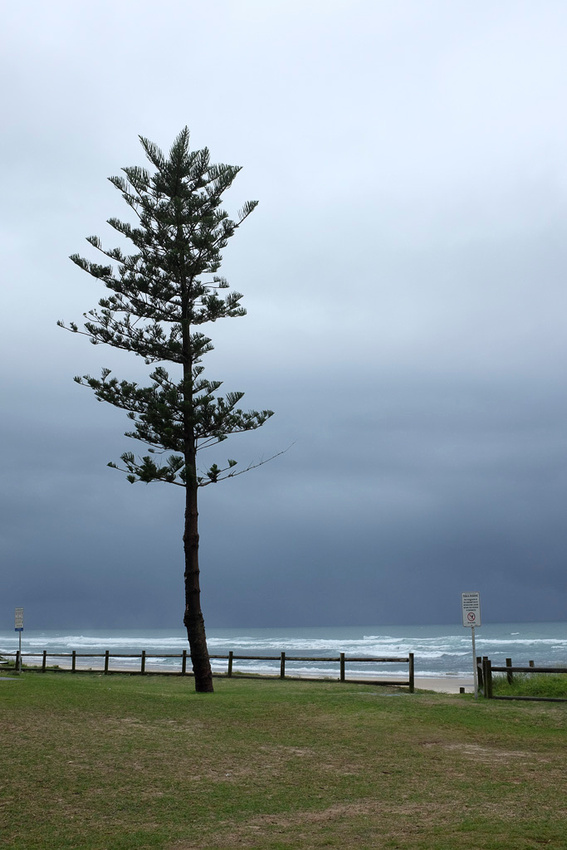 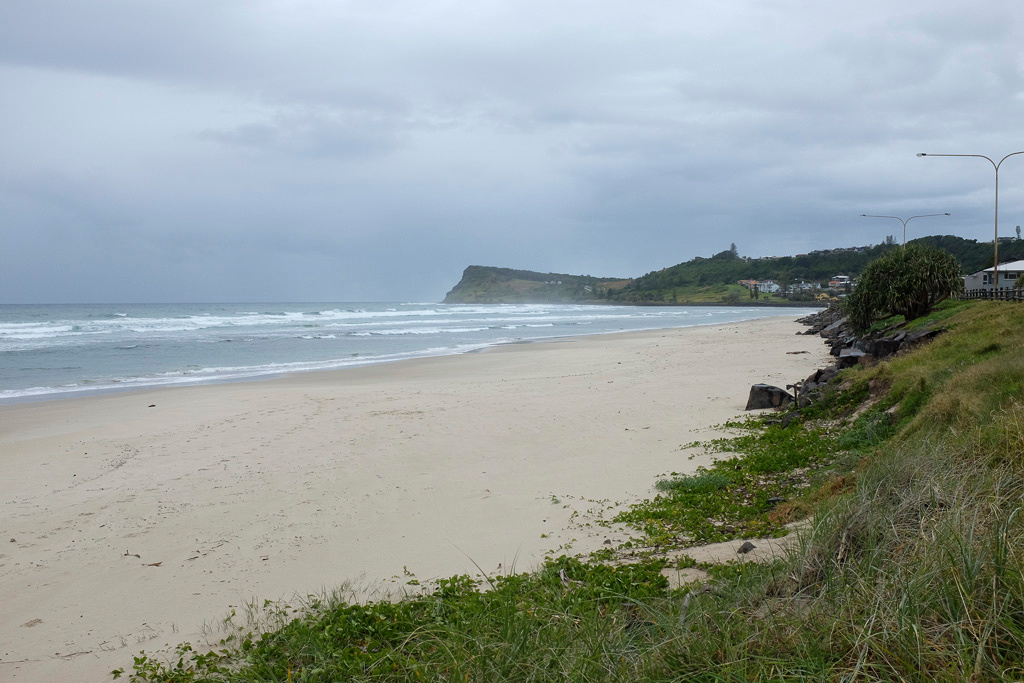 We carried on our way and decided to see what Iluka was like.  Cecily assures me it is beautiful, but unfortunately like anywhere in this overcast, dreary weather…it was average.  We did get to get out and let Harry have a run around. 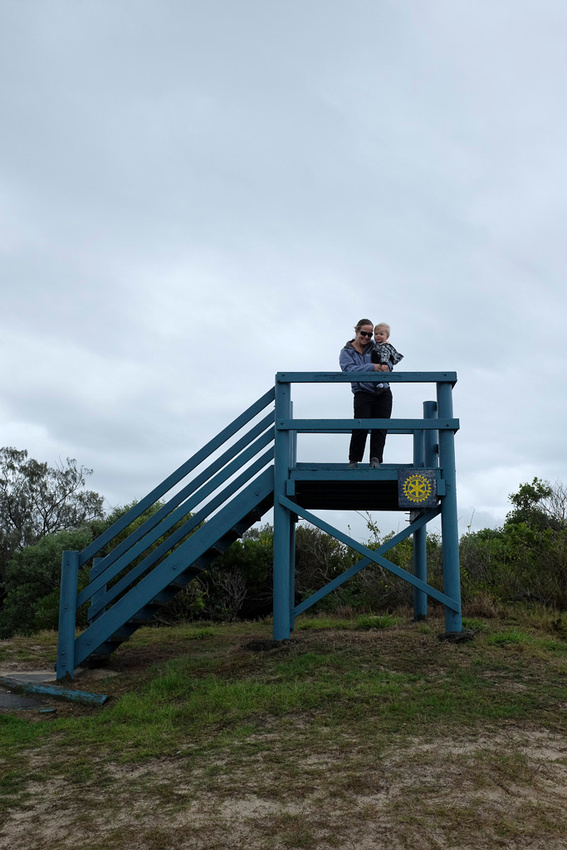 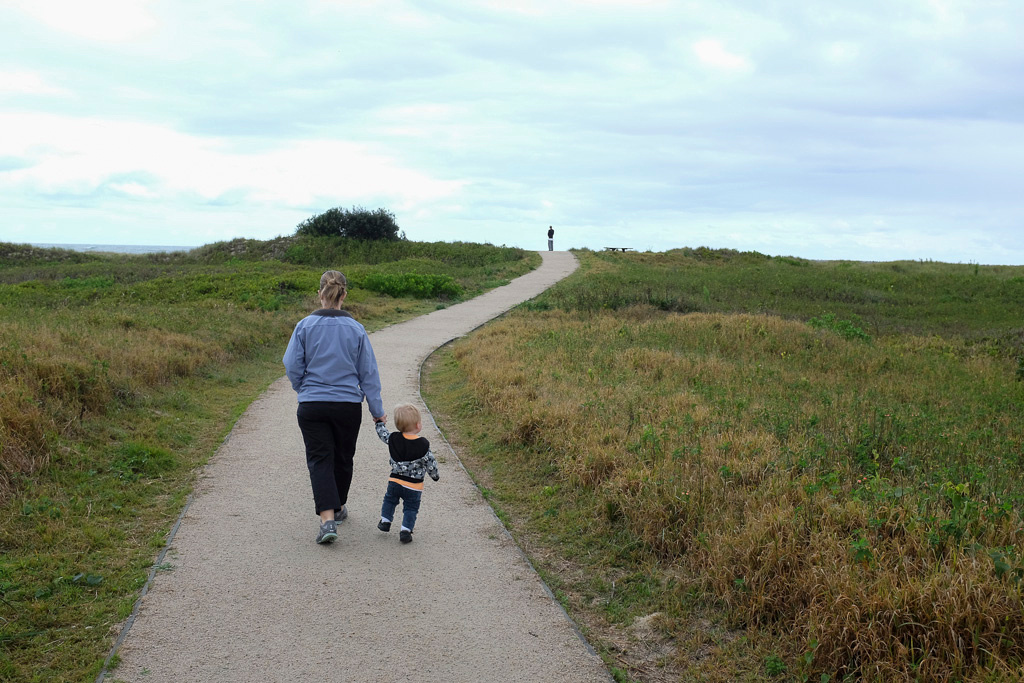 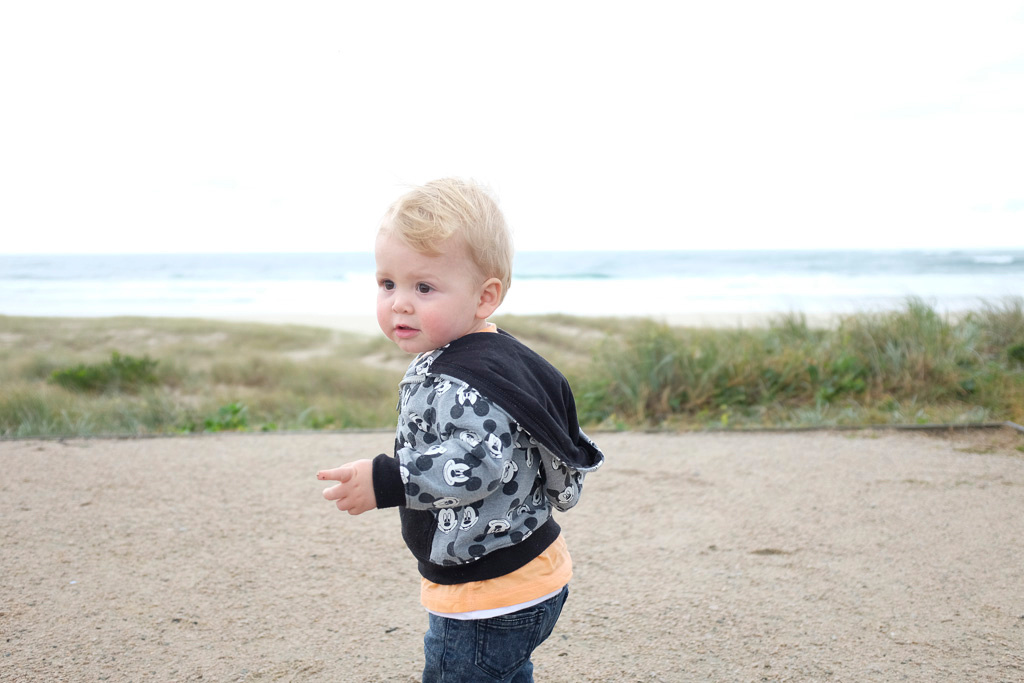 Our journey continued on to Grafton.  I was a bit tired so I asked Cecily to drive. 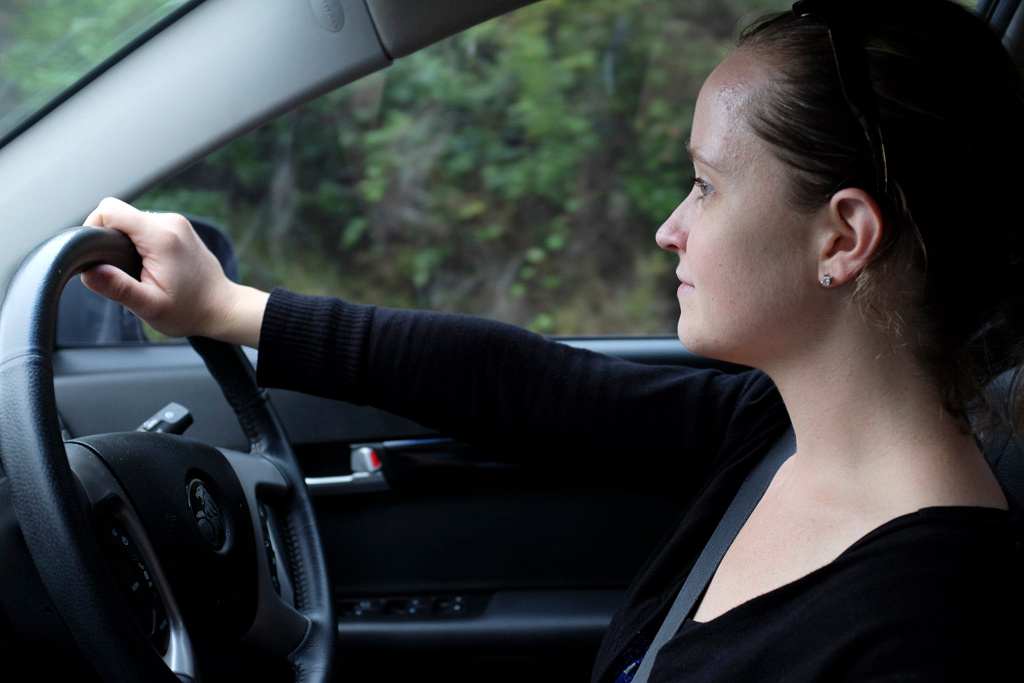 We were planning to stop there for lunch..but we kinda bypassed the city so we just pulled up to a roadside stop about 5km south of the town.  Harry had a lot of fun eating a vegemite sandwich! 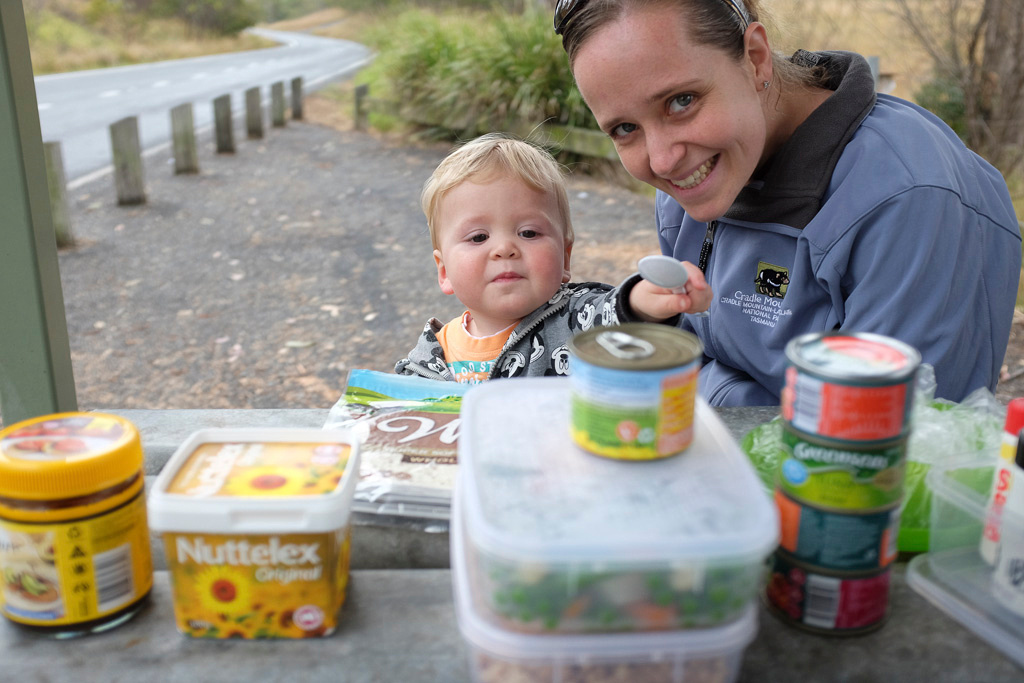 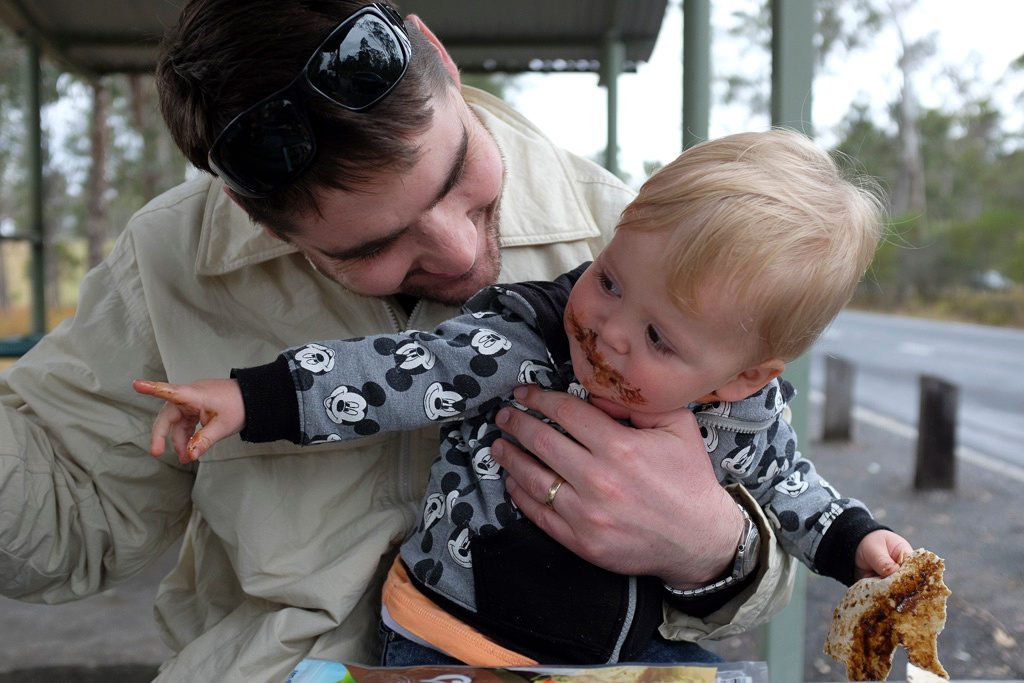 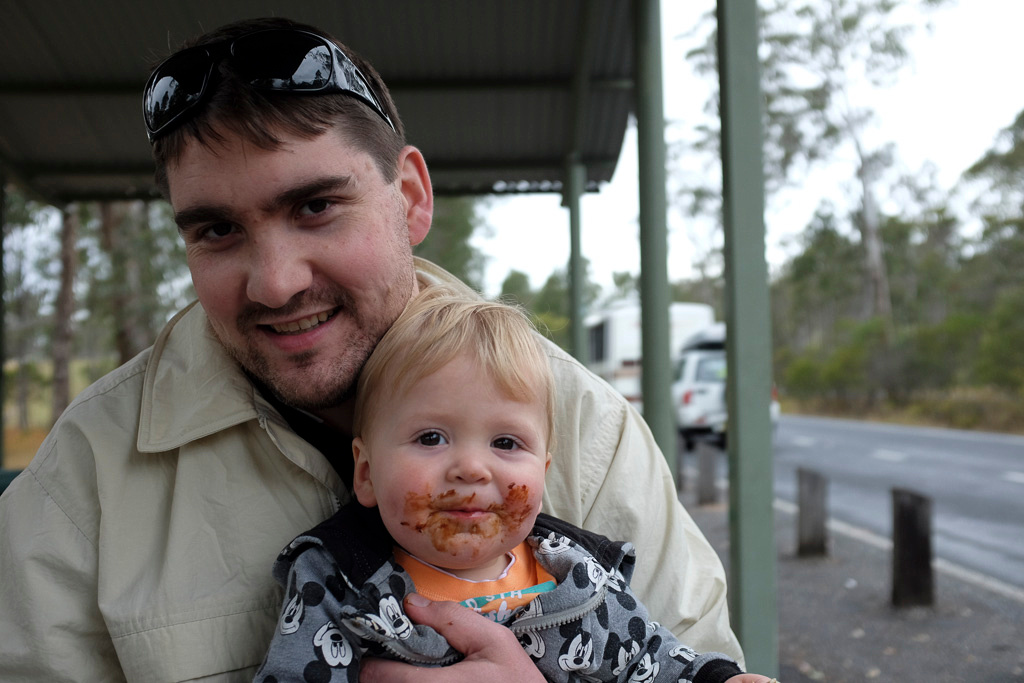 We journeyed on to Coffs Harbour.  We hadn’t booked any accommodation here but knew where we wanted to stay.  The website for the caravan park we were planning to stay at showed plenty of vacancies when we looked on Wednesday night.  Unfortunately, this was not the case.  They were booked out!  We decided to drive around Coffs and see what else we could see.  I spotted some apartments which looked suitable, so we checked them out and they had a vacancy!  They are a bit more expensive than the Caravan Park but it is nice.

This afternoon after settling into the apartment we went for a walk around the marina and over to Mutton Bird Island.  Harry was in the pram so we couldn’t go up Mutton Bird Island but we walked to the base of it. 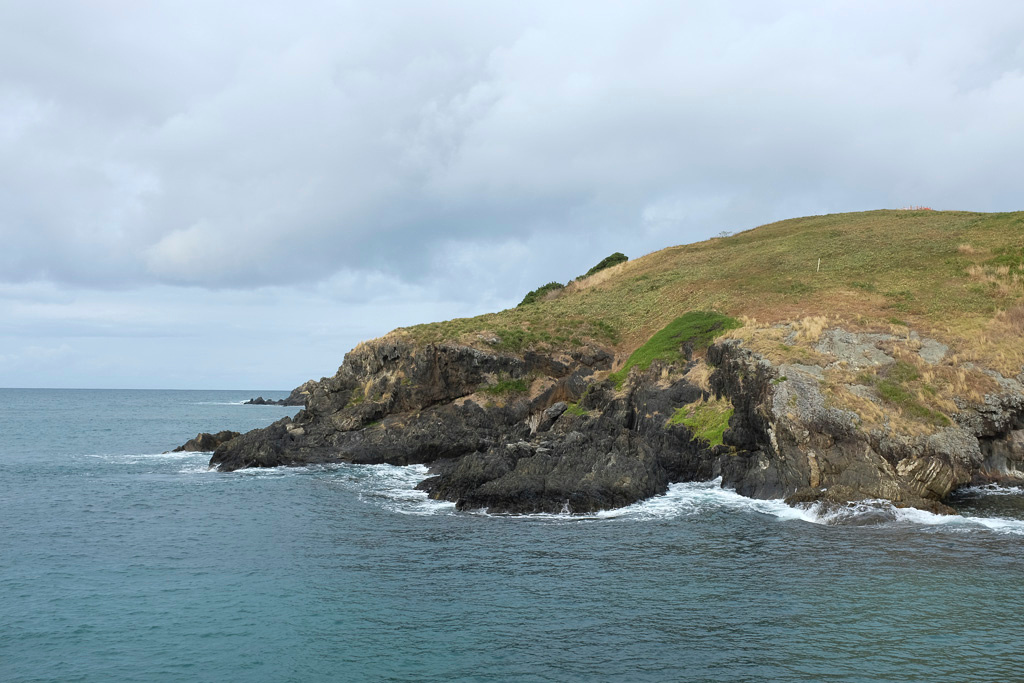 We will return there with him in the carrier I think.  Along the way we saw a few of Harry’s favourite things including a large truck driving along the walkway, a dog and some birds.  Whenever he see’s a bird he points and says ‘bird bird’.  He gets so excited to chase after them! 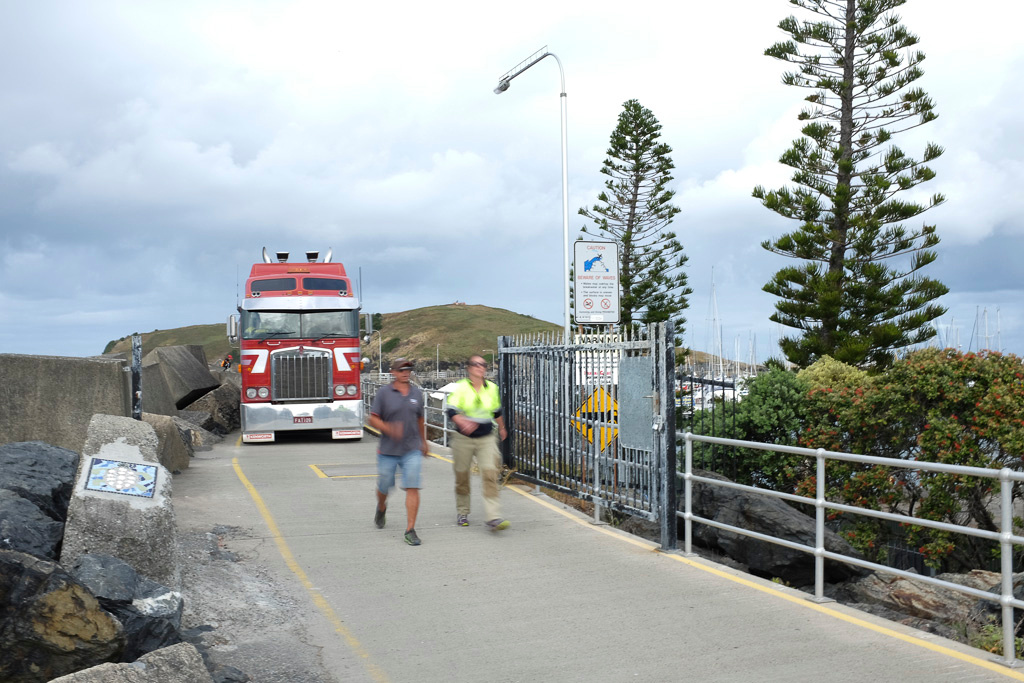 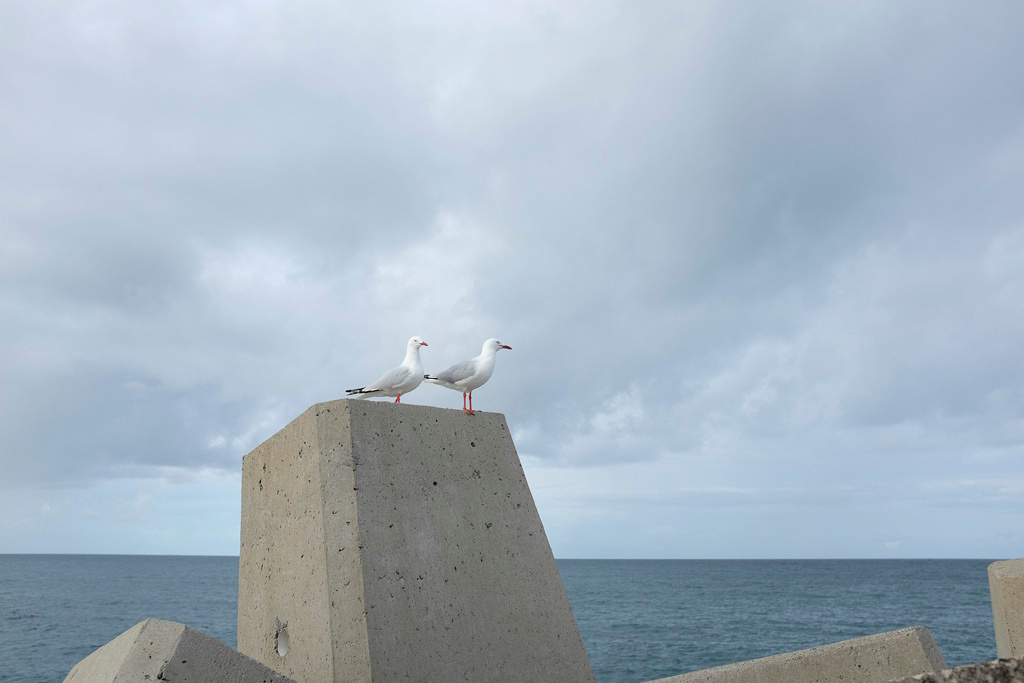 We also saw these metal covers. 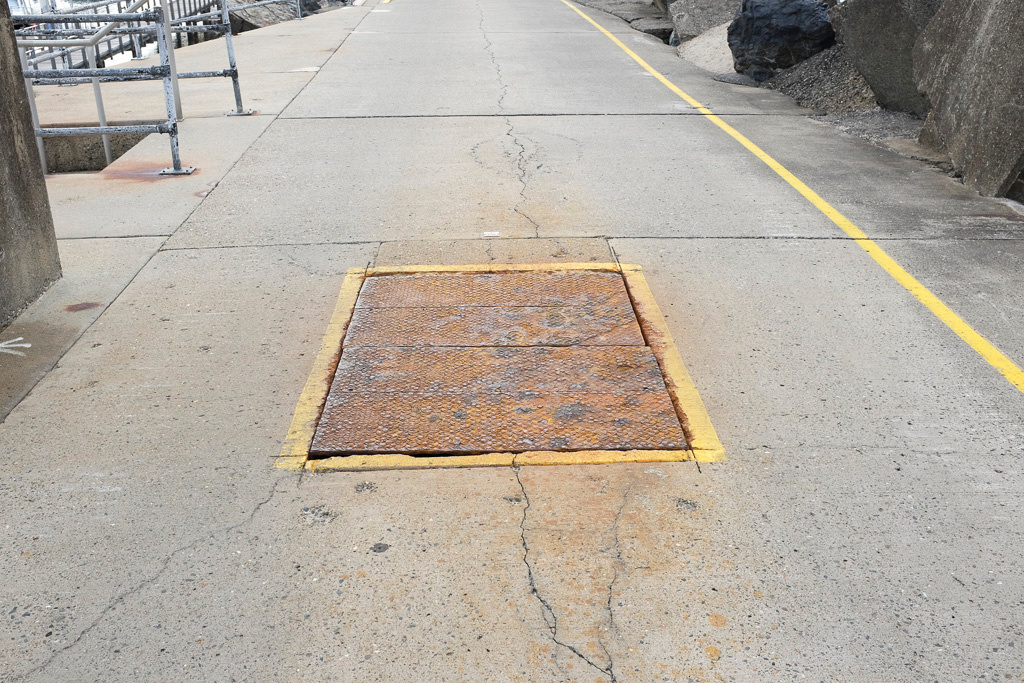 For some reason this afternoon Harry was adamant that he didn’t want his shoes on.  On multiple occasions he took them off! 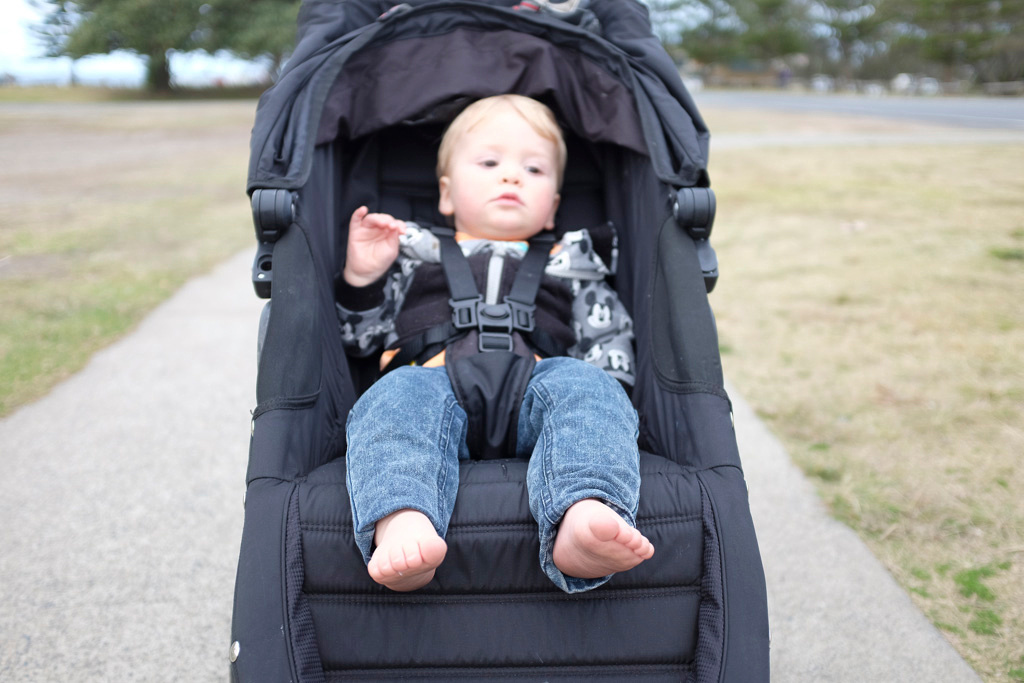 By this time in the afternoon the sky was still quite overcast but there were some gaps and bits of light peaking through. 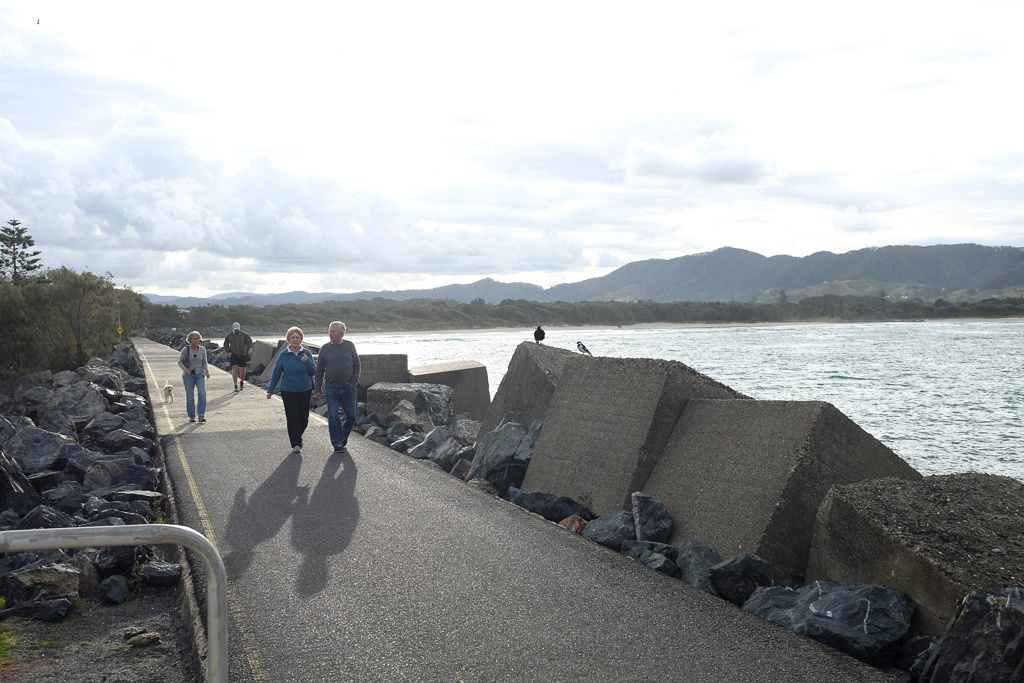 I decided to venture back to the apartment, get my big camera gear and then head to the jetty for sunset with Cecily and Harry.  We sat there and played a bit of a waiting game.  Cecily and Harry played with her sunnies. 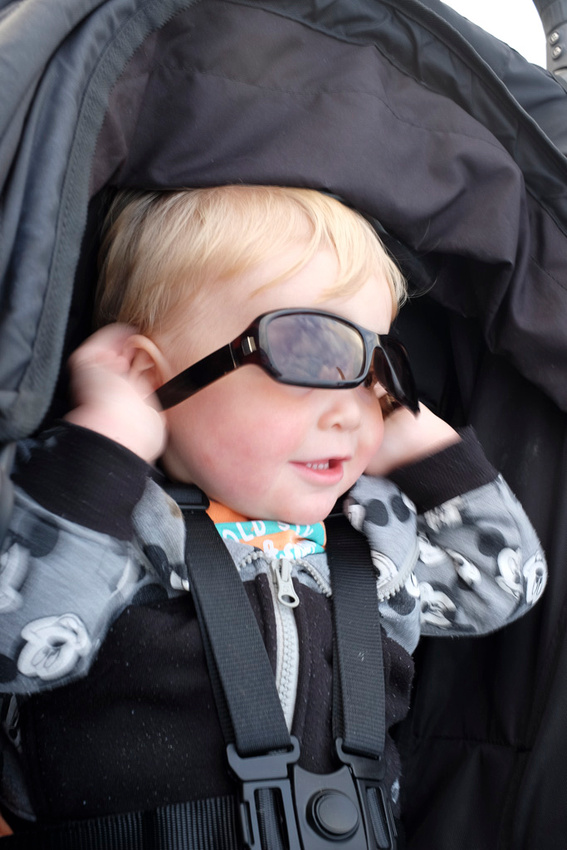 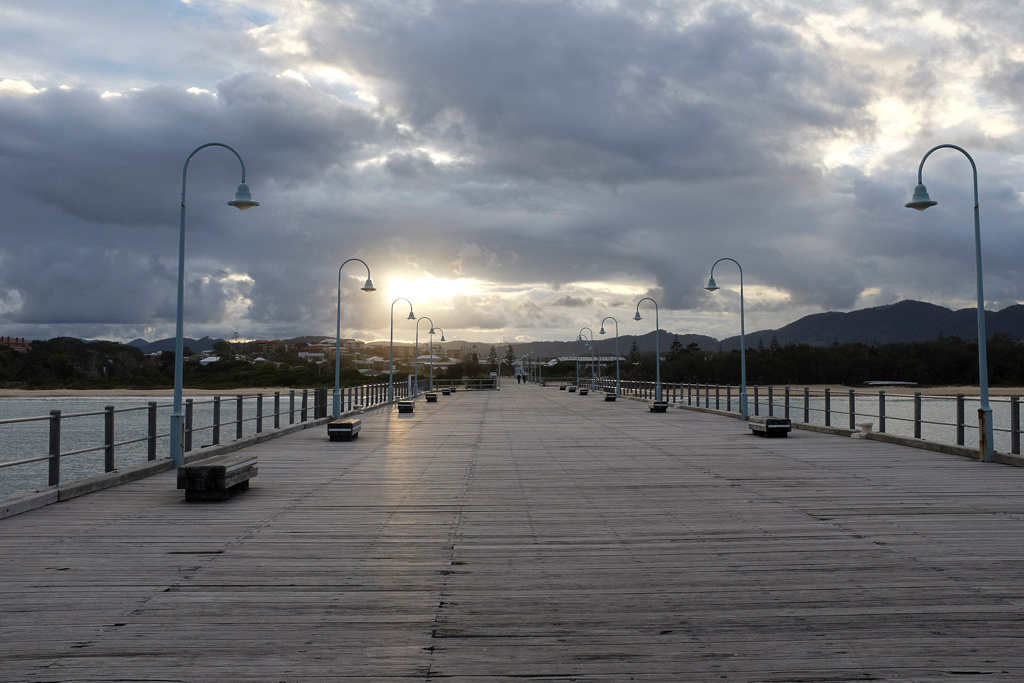 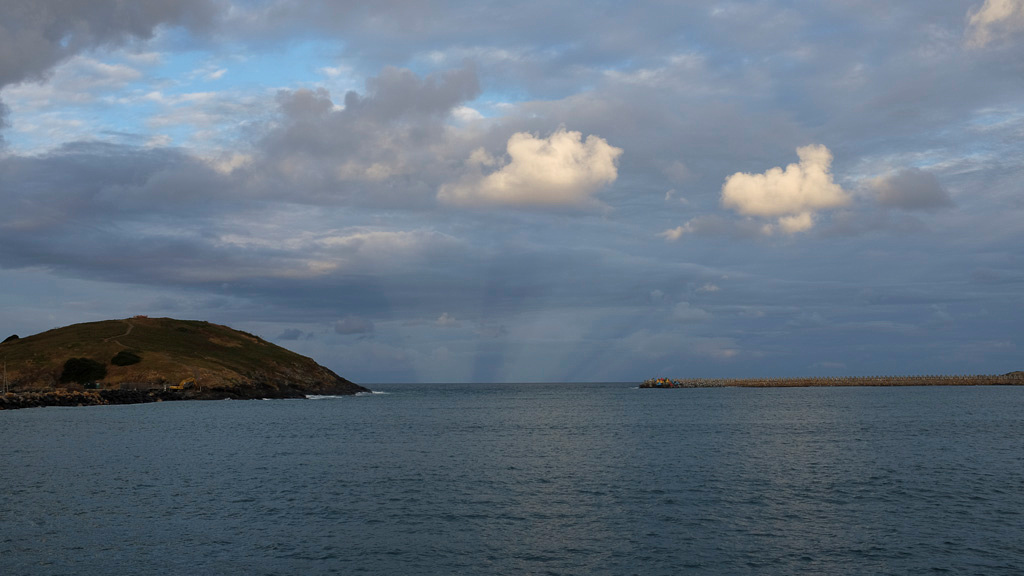 There was some nice pink cross light so I decided to take a film frame.  I had 1 shot left on the roll in the camera so thought it worth taking.  Unfortunately there will be a digger right in the middle of my shot!  (You’ll see when I get the film back).

As we were walking home some more cloud lit up on the jetty.  I decided to stay and take a few more shots while Cecily and Harry headed home as he was getting restless.  Just before they left though, Cecily fired off this great shot. 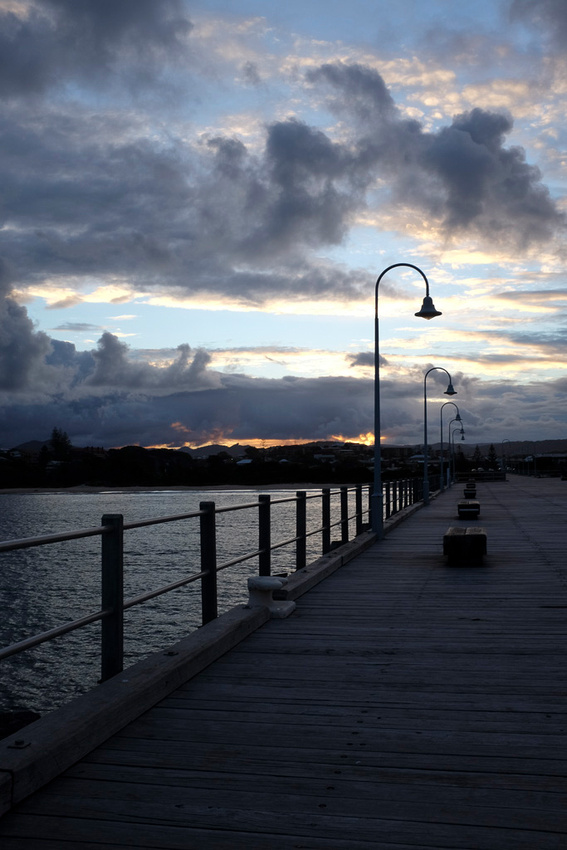