Well, yesterday was my 30th birthday.  Most people asked me how I felt turning 30...and the truth is that I don't feel much different.  If anything I feel fitter and healthier than my mid 20's.  I can attribute this to healthier eating, exercise and running after an almost 2 year old boy!

A few people asked me what I got for my birthday.  I got a few books (one Ken Duncan one), a few CDs, a hat and a new photography bag has been placed on order.  I am awaiting delivery (hopefully next weeK).  My wife also made me an awesome cake!  It was shaped just like my favourite camera - a Fuji G617.  Not only did it look awesome, but it tasted awesome and it was dairy free so my son could eat it!  Did I know I my wife was planning on making me such an awesome cake?  The answer is no. 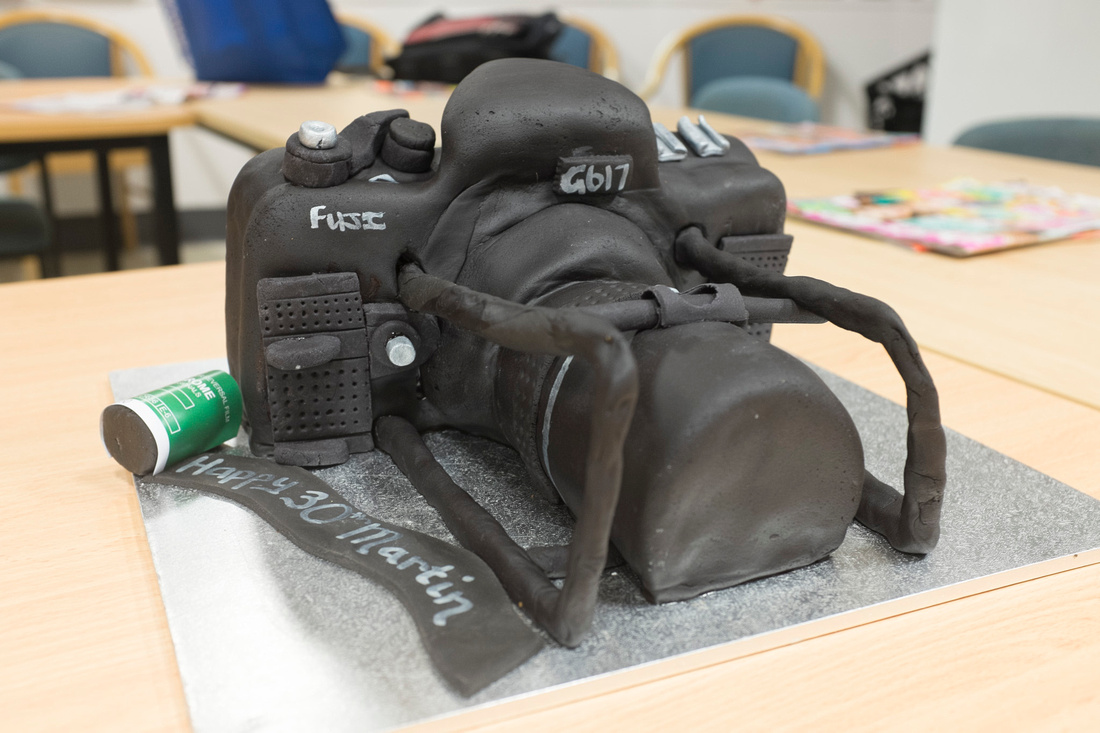 A few weeks ago my wife and I started talking about the sort of birthday cake we should make for our son who turns 2 in April.  Over the last week or two I had noticed more and more cake making goods being purchased and borrowed.  They have been accumulating on the kitchen table.  My thoughts were that they were in preparation for commencing Harry's cake.  I didn't think this was too unreasonable as my parents-in-law are traveling and I thought it seemed reasonable to borrow some tools to use as they get back close to Harrys birthday.

On Sunday my wife and son started doing some baking.  This is not that unusual.  I thought it was something to keep Harry occupied as he just wasn't being himself.  He was a little whingy.  As my wife and Harry were mixing away, I was doing some research on a new camera bag (for my birthday) and doing some measurements around the size of the bag I want and my cameras sizes.  I cottoned on to something fishy happening when my wife stated 'once you have checked the measurements can you let me know them?'  I thought that was a bit weird. 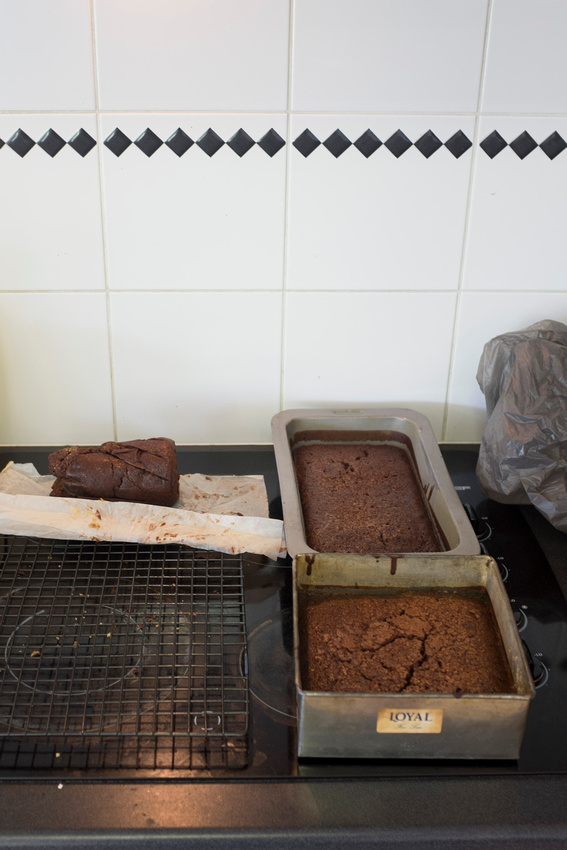 Here are the cakes cooling

Fast forward a few hours and she has three cakes cooling away and my camera out on the bench as she plays with icing trying to make some of the details of the shutter button, grips and the lens protector bars.  This is when I realised I was getting a Fuji G617 cake! 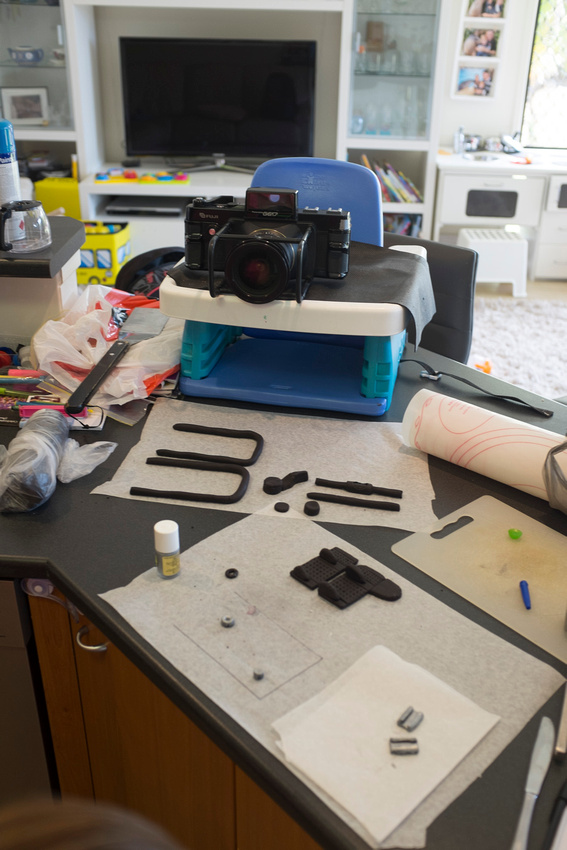 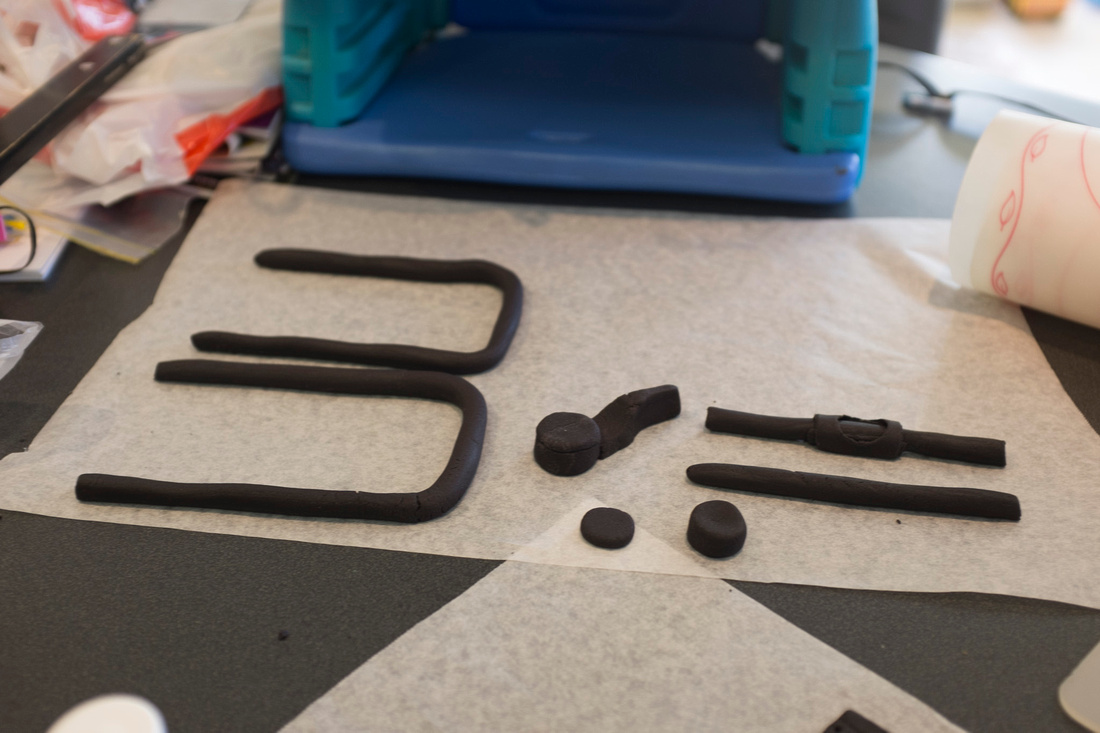 On Monday night my wife cut out the 'lens cone' section, put together two thin slabs to make the body as well as cut out the viewfinder.  (I don't have any photos of these).  She then made a dairy free ganache and coated each in ganache.  As I had cottoned onto what was going on, we discussed how she would present the cake on the board.  She was concerned it wouldn't stand up so I suggested to have it as if it was lying on its back.  We decided we would wait to see how it felt after the ganache had dried.

Fast forward to Tuesday night...she started to put the cake together.  She decided to do it as you would see the cake and not have it lying down.  She put some skewers in to support it. 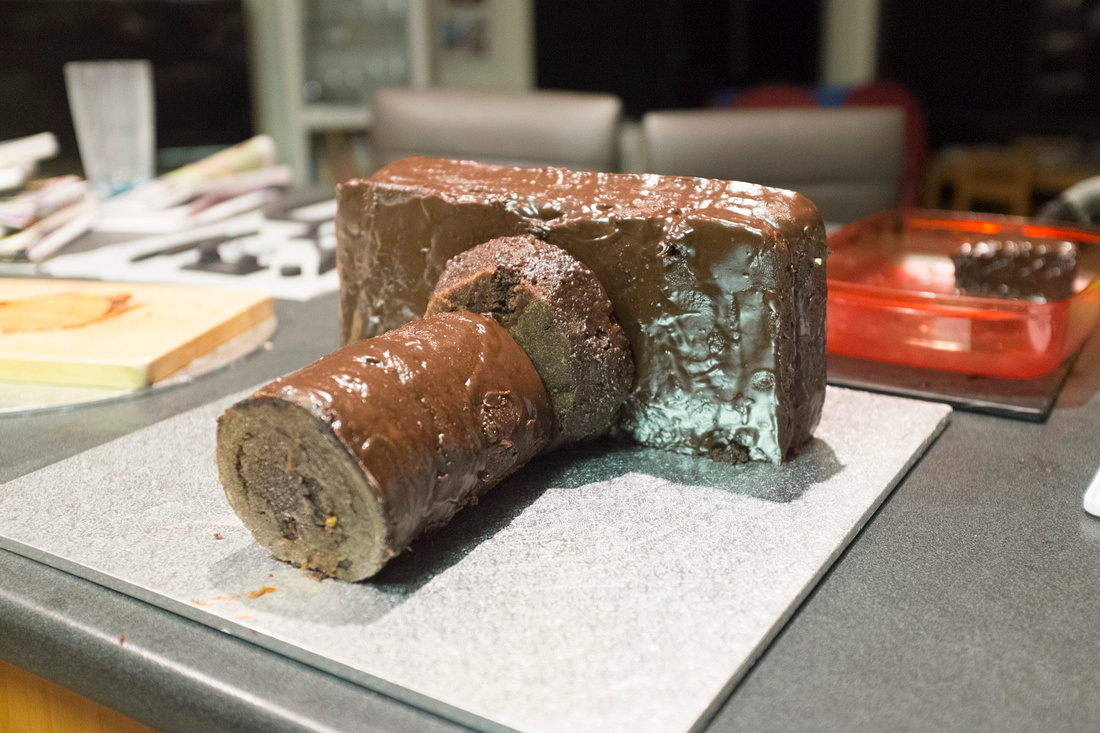 The cake without the viewfinder 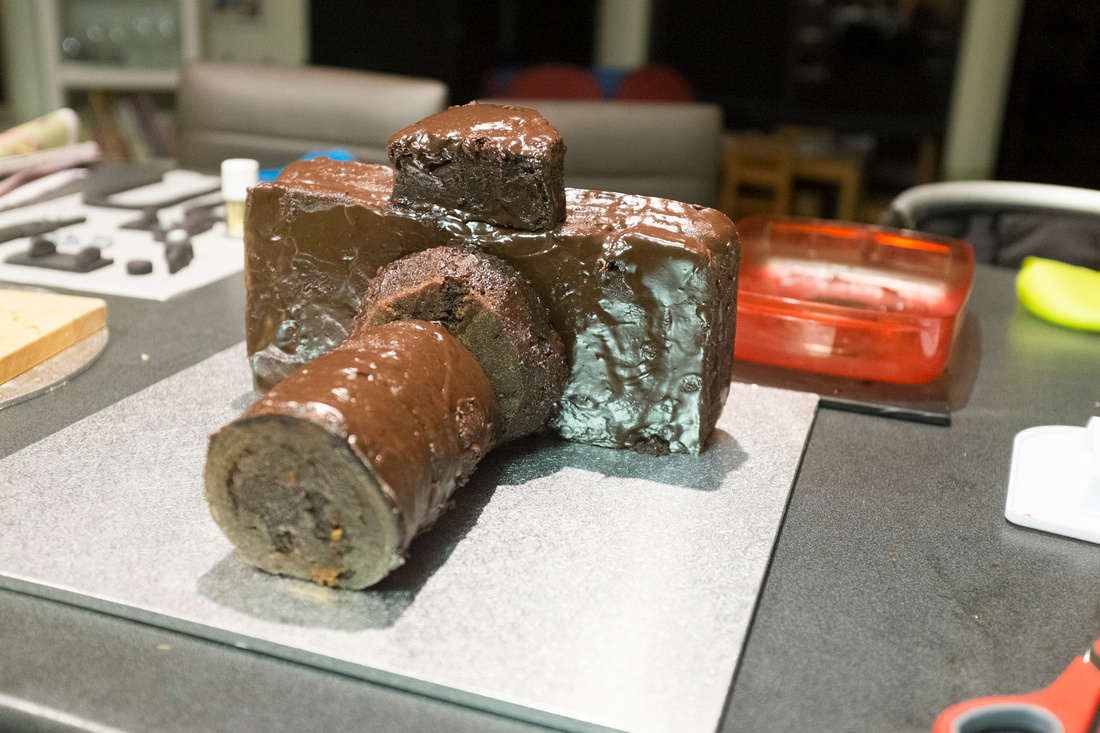 The cake with the viewfinder

My wife had purchased some black icing.  She rolled it out to use and thought it seemed a little soft.  As she had not used it all that often she sought some assistance from her mum (via phone) and sister-in-law. 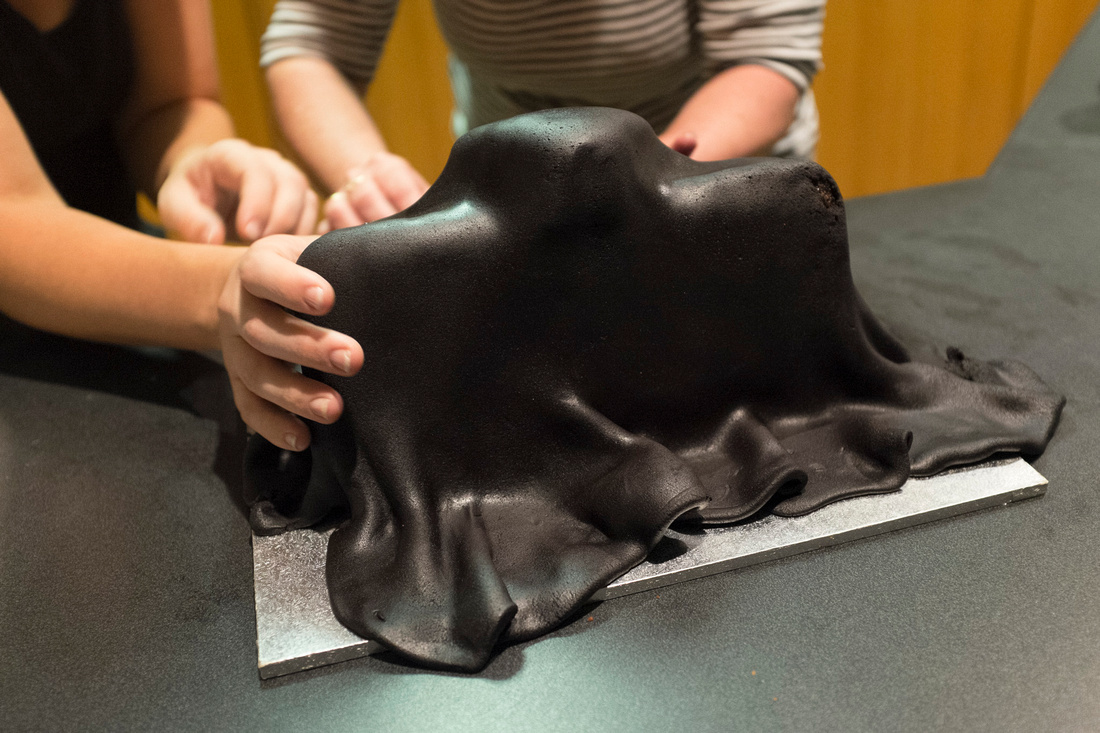 The icing was trimmed and smoothed out.  It was then time to put the 'accessories' on.  There were some difficulties with the lens protection bars as they weren't strong enough by themselves and we didn't have much to support them.  In the end my wife used some cake wire and skewers.  By this stage it was quite late at night, so I headed off to bed. 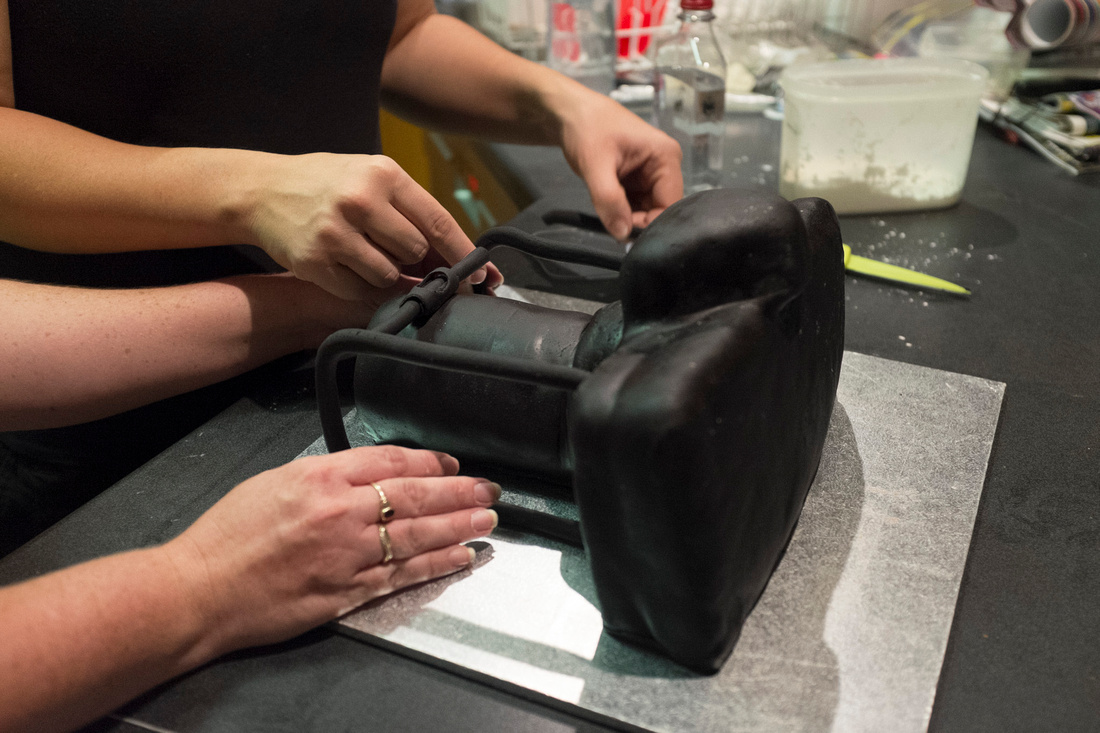 On my birthday I woke at 4am!  I don't know why.  Maybe it was the content from the previous days 'writing for web' workshop I had been to or maybe it was the anticipation of the cake that i was to wake up to see.  Anyway, as I couldn't sleep I got up at 4 am and had a sneak peak of the cake.  It was good! 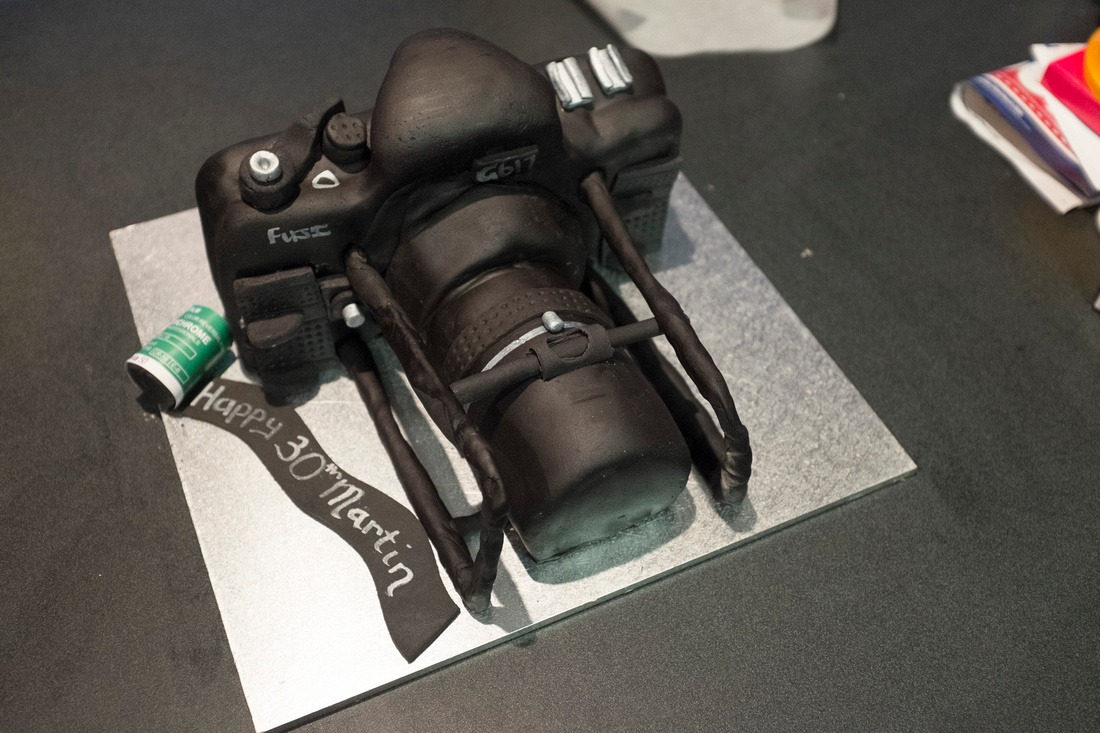 I dozed back off to sleep until my son woke me at 5:10 am.  I took some more photos and put my camera next to it for comparison. 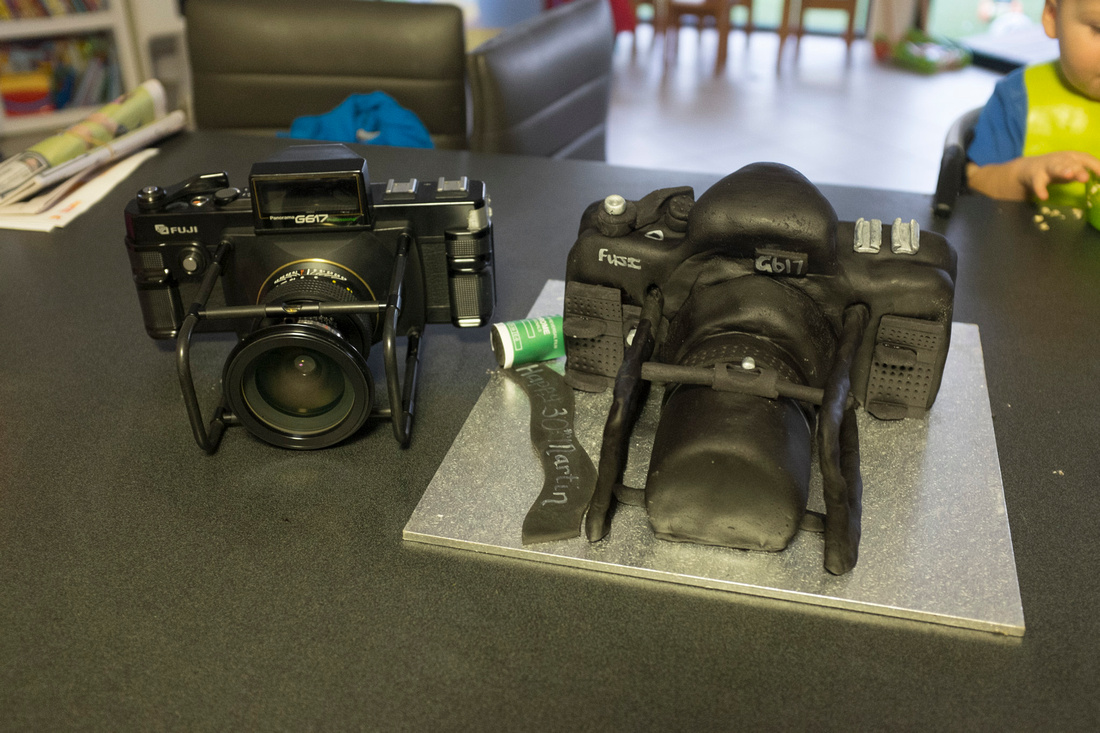 The only thing I can fault about the camera cake is the film canister.  Cecily rolled a piece of icing and placed a printed label on to resemble a cannister of film.  The only thing is that the canister is for 35mm film...not 120.  Not bad for the only problem! 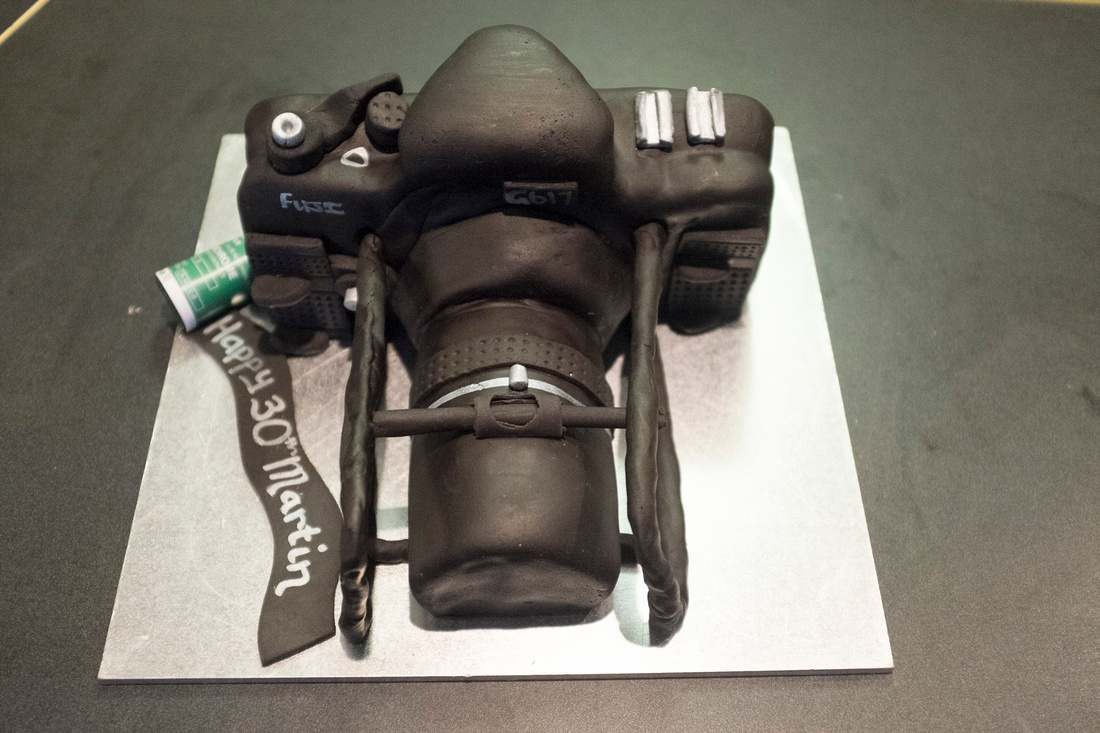 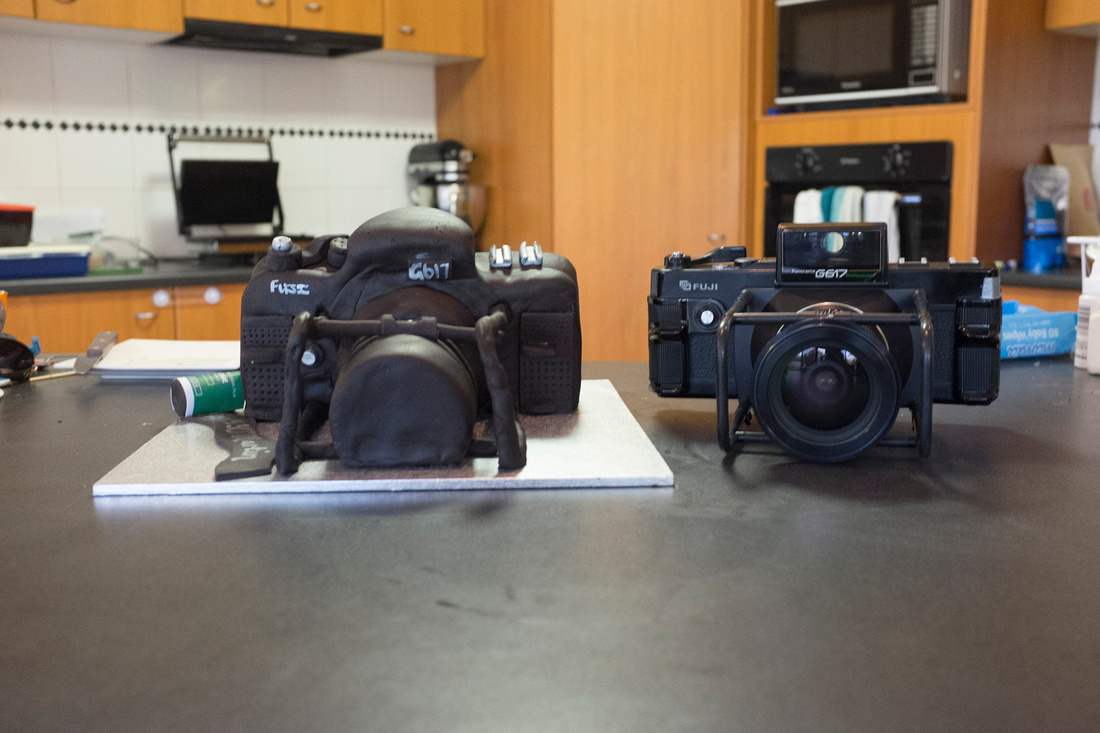 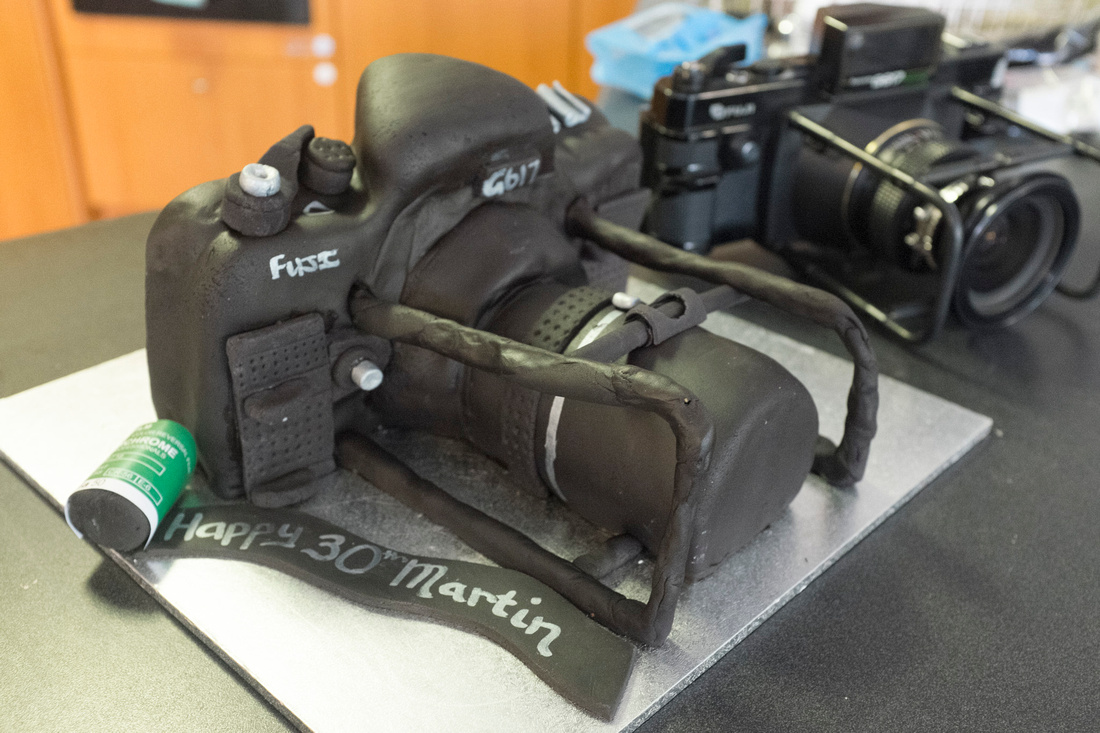 I took the cake to work as I knew Cecily, Harry and I would be eating it until my birthday next year if I left it at home. 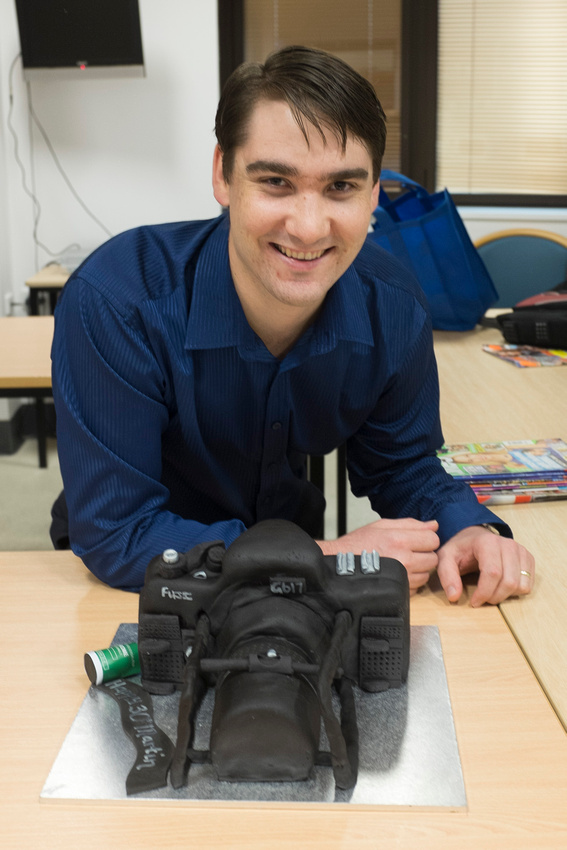 I cut the cake at morning tea and by the time lunch had come it was almost all gone! 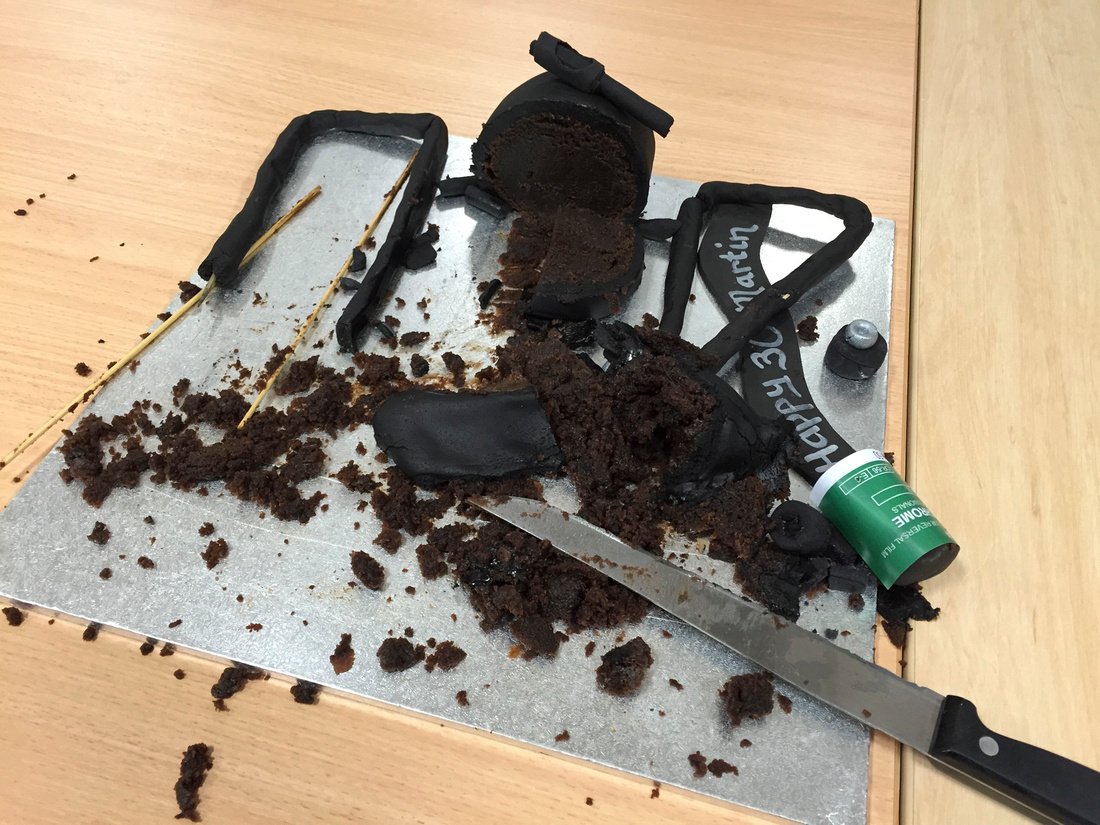 Thanks to Cecily and Harry for making the cake and I think you did a great job!  Thanks to everyone in my team and department at work  who wished my a Happy Birthday and made it an enjoyable day.

Hopefully I'll be able to get out to do some photography soon and be able to share some more photos with you.

P.S. I forgot to mention the cake was a dairy free mocha (coffee & chocolate) cake.