I made some custom frames!

When I started out doing photography the one reason why I wanted to photograph was to take images that I could be proud to put up on my wall at home and have people who visit my house enjoy the images on the walls.  I have about half a dozen photos up, most of which were from a trip to Europe in 2009.  They are either art mounts or canvases.  I have one other image from 2012 which is a 42 inch framed panoramic print above our piano.  I decided earlier this year to have a look at options for replacing these images.  To achieve this, I decided to make some custom frames from some wood.  This blog will step you through the process I went through, from making the frames, painting them, mounting the prints and then finally hanging them on the wall!

I had already decided upon the sylte of the frames I wanted to make.  I wanted to make wooden frames with a wire across to hand pictures off using pegs.  In order to make the frames, I had to decide which size images I would like to print.  I settled on a 6 inch by 18inch panoramic image.  Hence, I cut this size out of a piece of paper and determined how big the wooden frame would be.

I headed to Bunnings and bought some pieces of 1x2 (I think) pine.  I bought a couple of 1.8m lengths and some 2.4m lengths.  In the end I worked out I could make 1 frame from a single 2.4m length.

I headed to my Mum's place and used her husbands drop saw to cut each length of wood to size.  I had bought enough wood to make 7 frames, so cut them all on this day.  Below is how they looked. 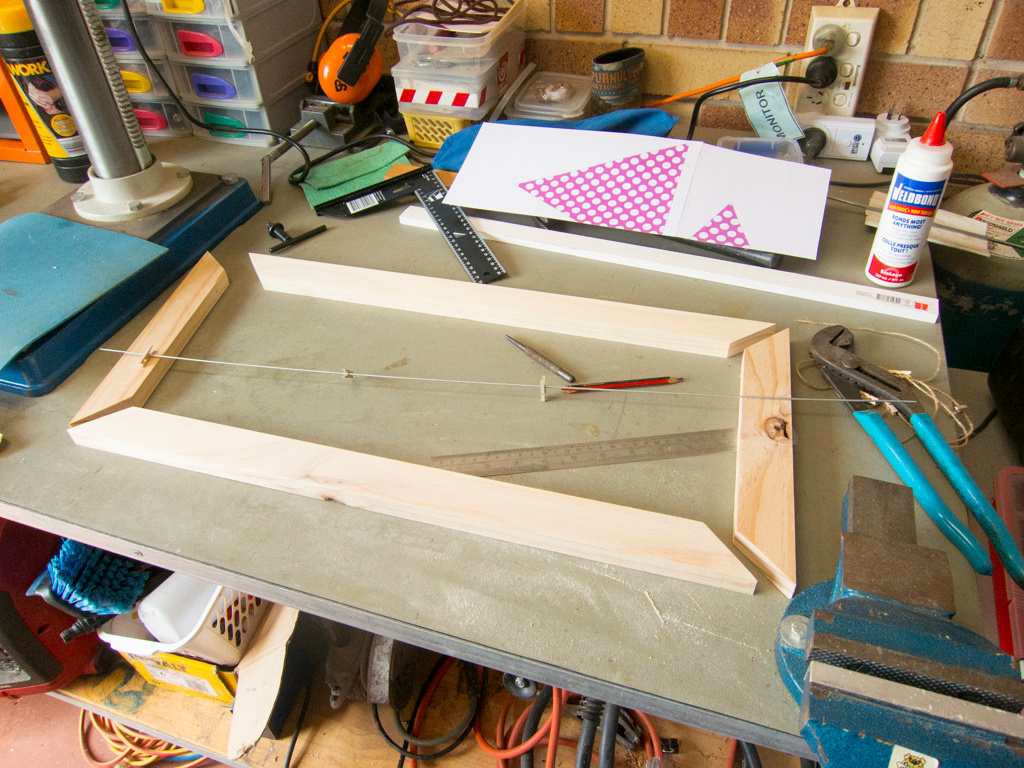 I got some wire and cut it to length.  I then drilled some holes in the edges to hold the wire in place. 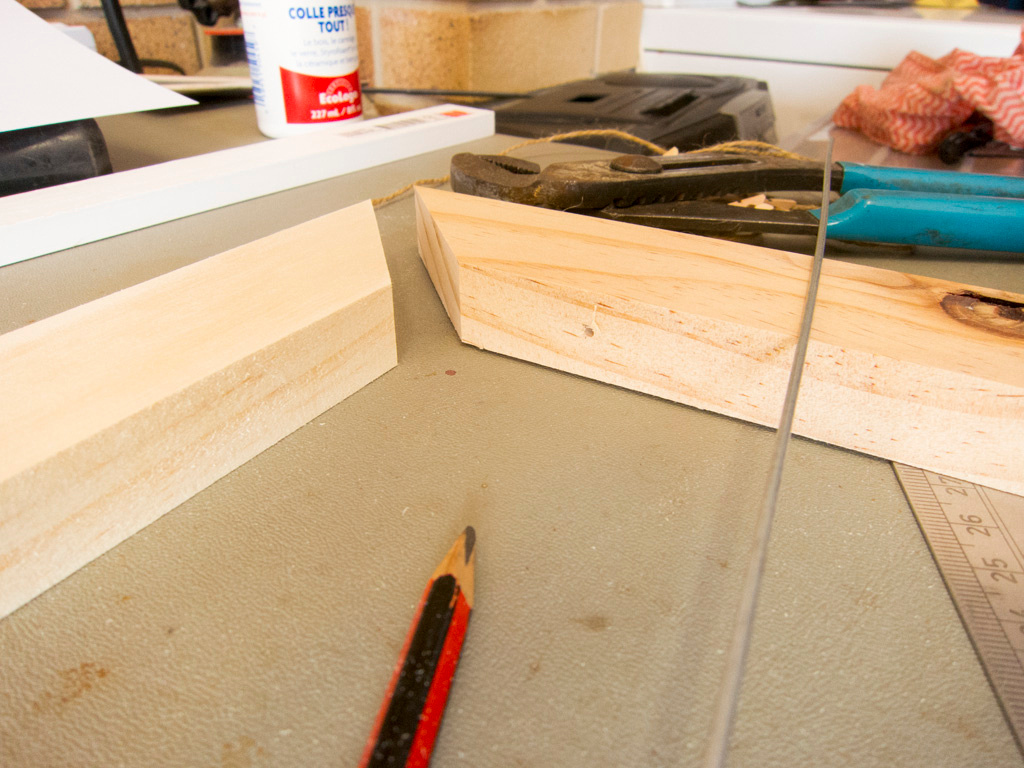 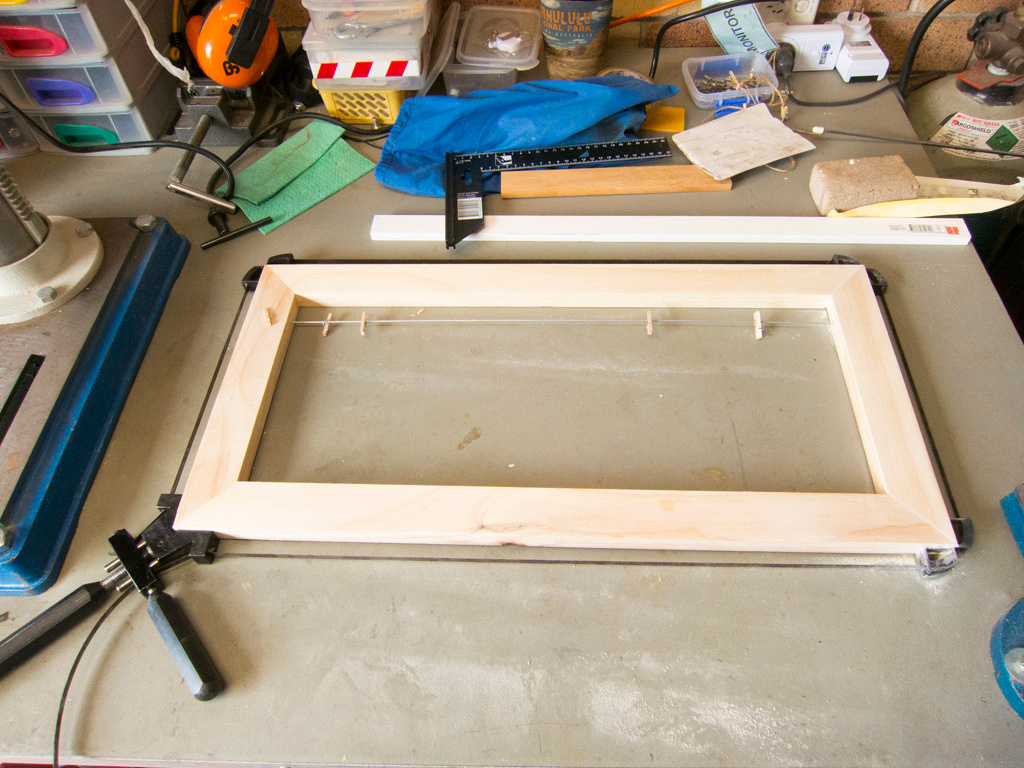 I then used a punch and some corner nails to nail each piece of wood together. 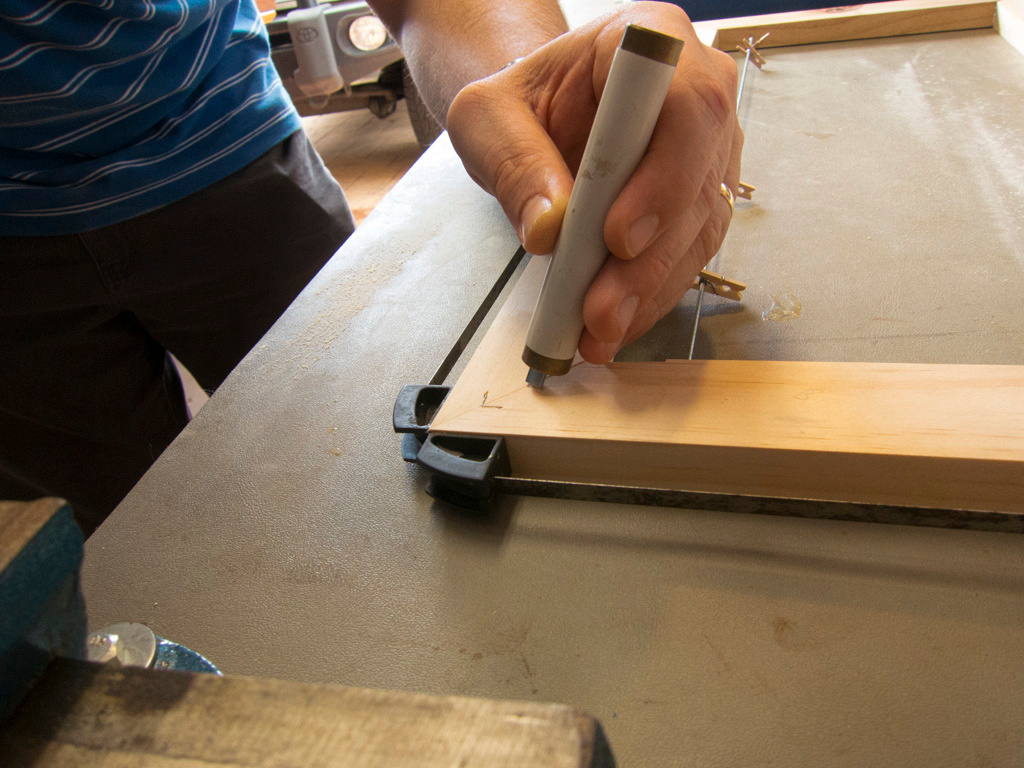 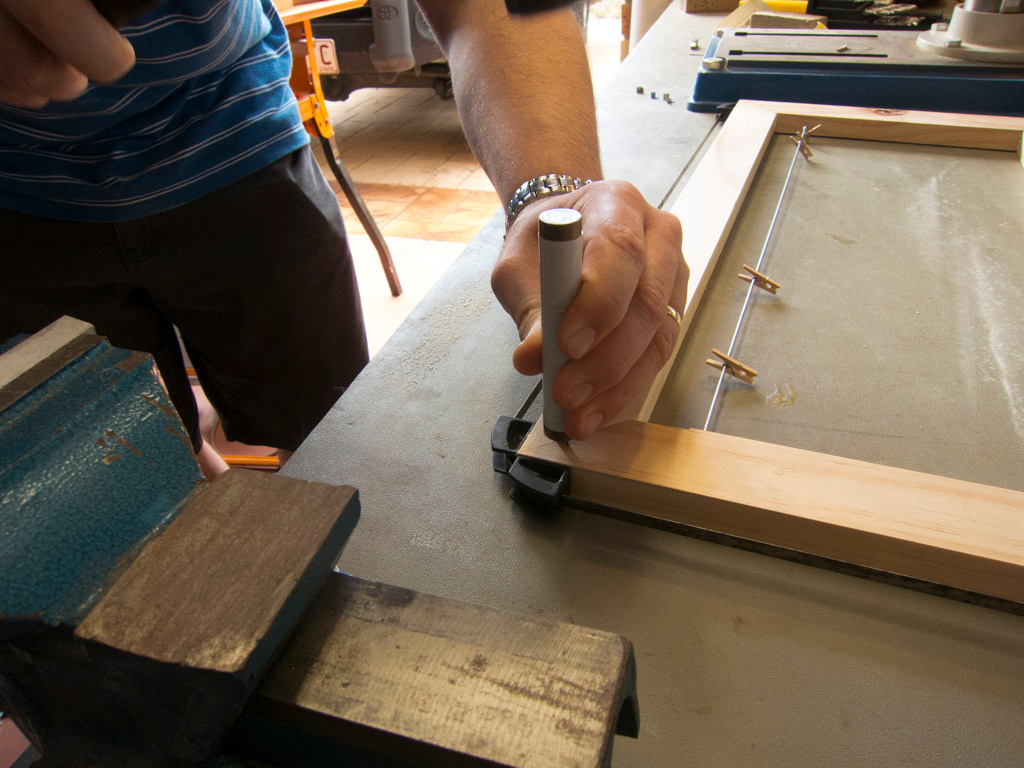 In my initial frames I put three nails in each corner, but as I progressed through making more I reduced it to two. 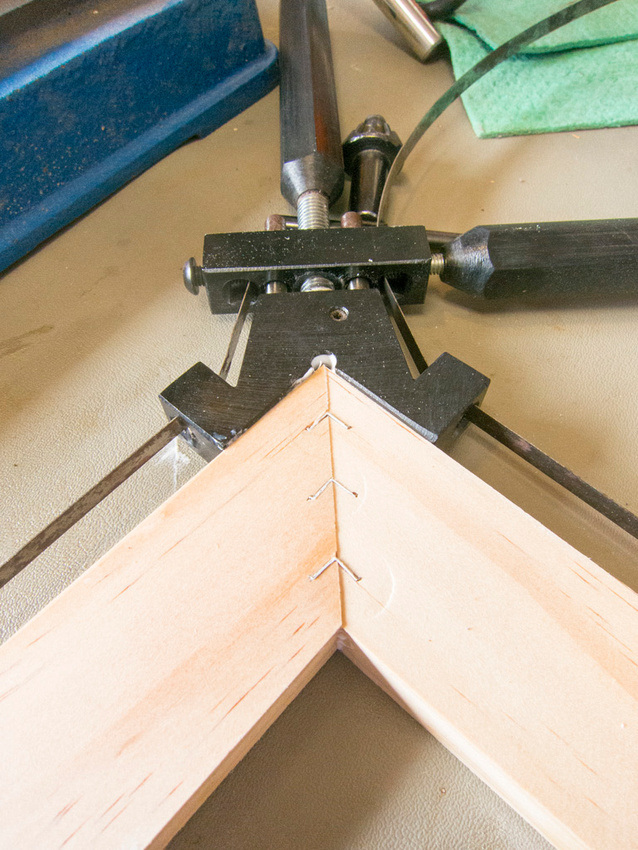 I then sanded the frame and it was ready to paint! 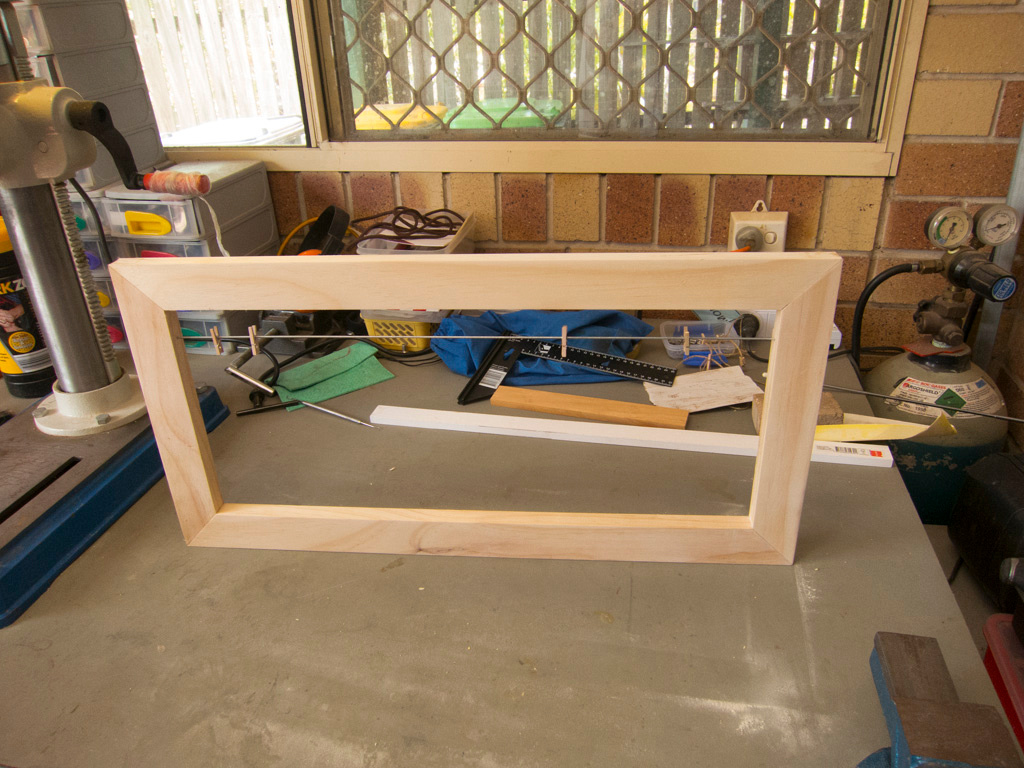 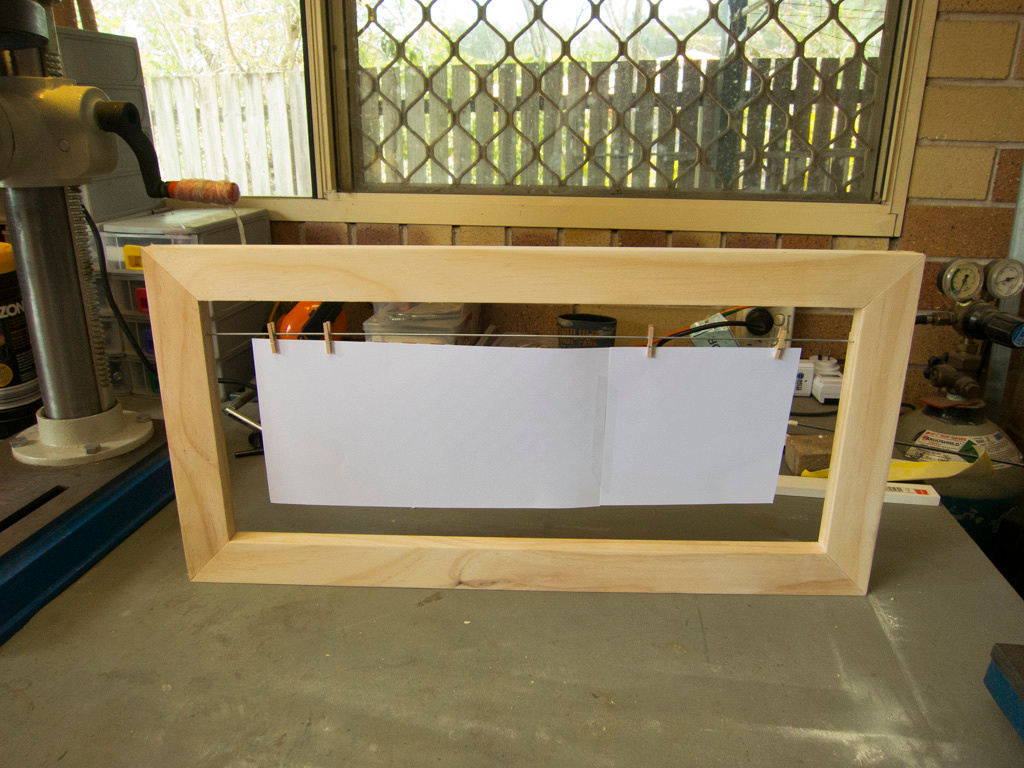 I decided to paint my first frame black.  I had some black enamel which I thought would suit. 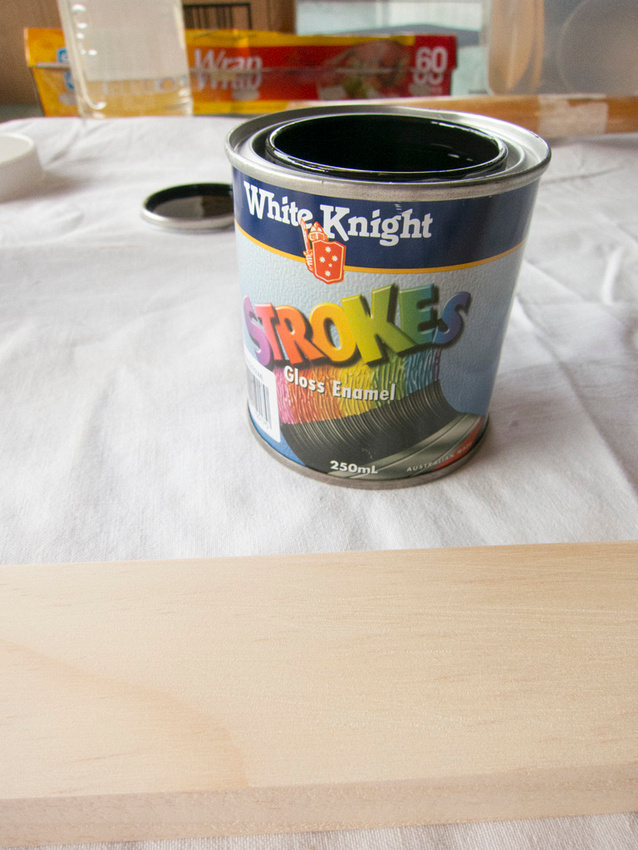 After sanding the frame I proceeded to masking the edges with masking tape and I used glad wrap to mask the pegs and rest of the wire. 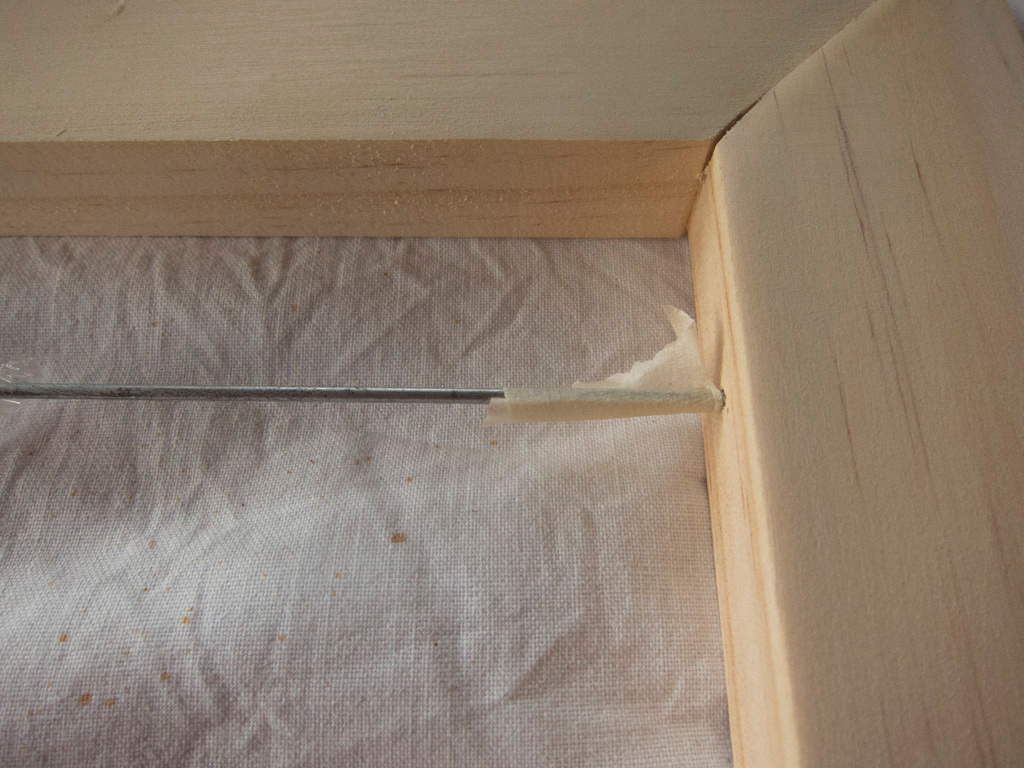 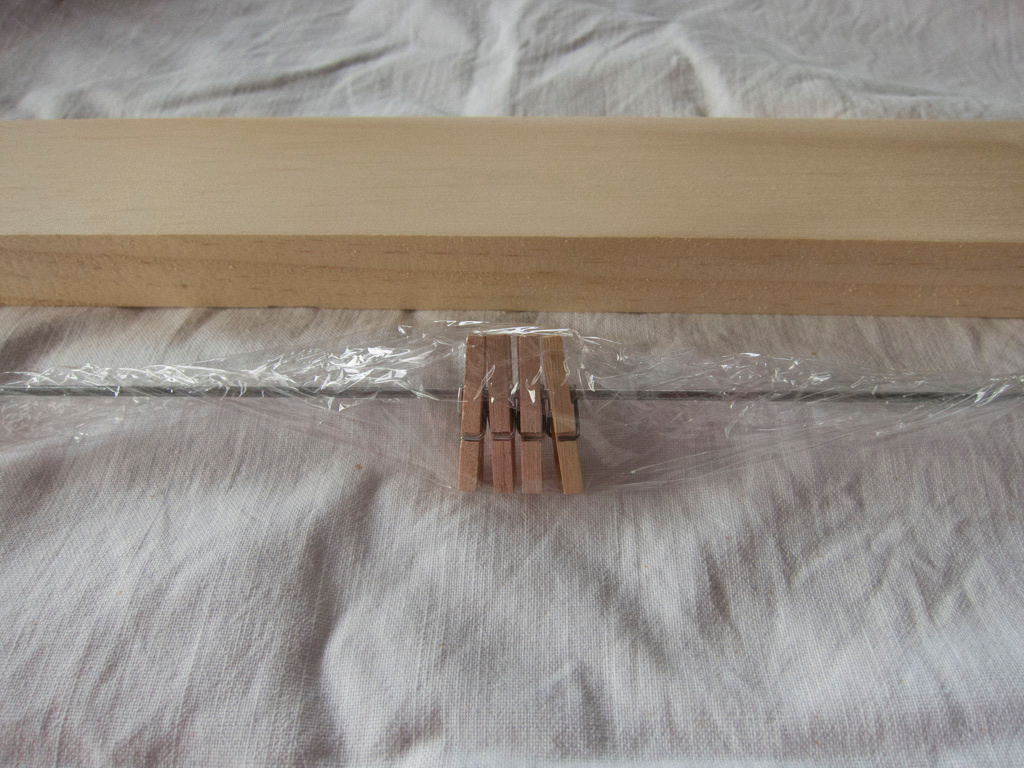 I proceeded to paint. 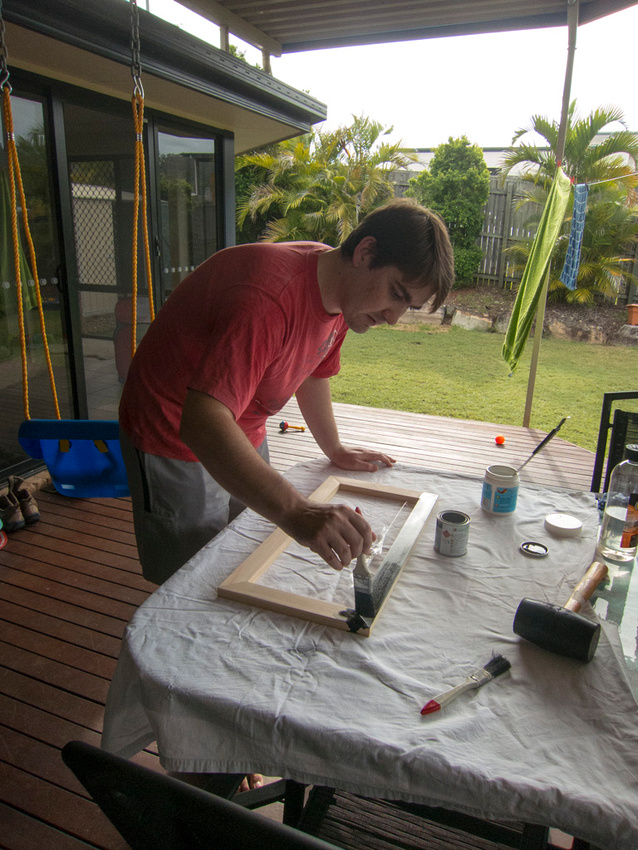 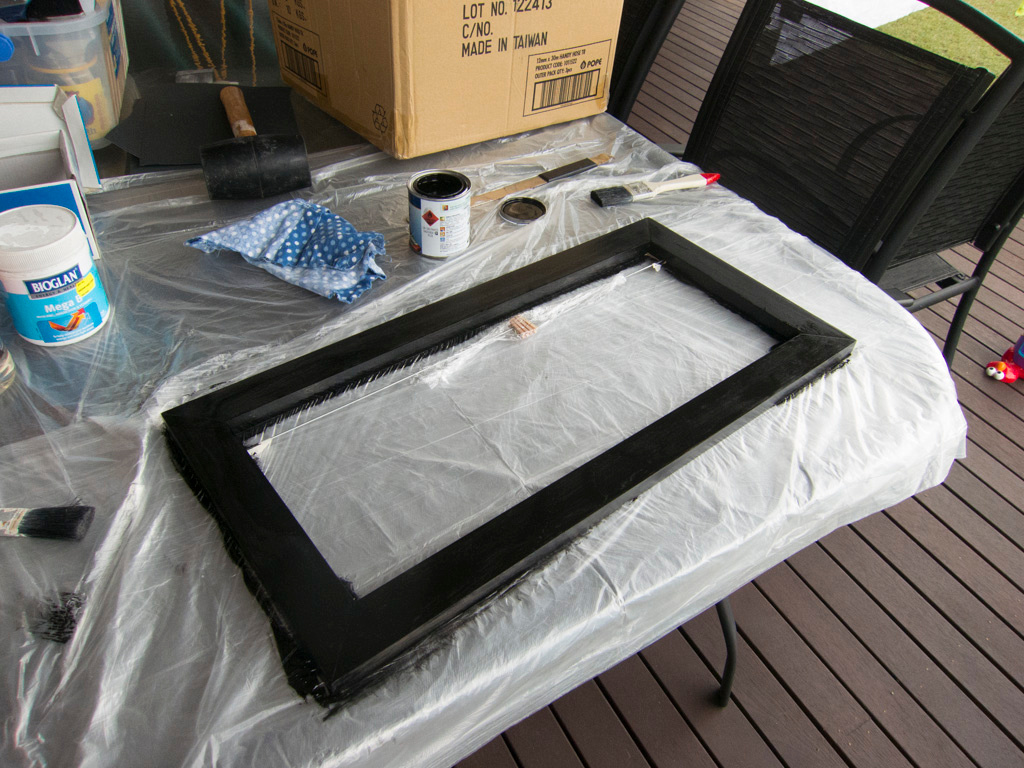 After the first coat, I let it dry and I did another coat.  Unfortunately there were a lot of brush strokes and after multiple coats I decided it best if I use spray paint (where possible) on future frames.  I chose the next frame colour to be purple as I thought it would go really well with an image with some purple jacarandas on.  It did!  So, I then chose a few other bold colours (red and orange) to match a few other images.  In the end the seven colours I painted the frames were black gloss (brush), flat white (spray), clear gloss (spray), purple (brush), orange (spray), red (spray), and blackboard chalk (brush).

Well this was one job that I was not going to do myself.  I don't have a dedicated photo printer that would print as large as I wanted for these frames so I hunted around for somewhere to get them printed.  In the end I chose RBG Digital.  The price for a lustre mount 6x18inch print was $9 which I thought was quite reasonable.  I then realised that based upon their paper size I could fit two 6x18 inch prints on the same piece of 12x18inch paper.  Bargain!  They offer a 'cutting' service where for $1 per image they would trim each image to 6x18inch.  Hence, in photoshop I made files up to do this and sent them off.  In the end I decided to get six of the images printed on lustre paper and two on metallic paper.  I almost got two on FujiFlex but it was 5 times the cost so I decided not to for now.  A few days later I received the printed photos in the post all trimmed up and ready for use!

My initial plan was just to peg photos onto the wire and hang them, but after considering this I came to the conclusion that they would probably bend and the best approach would be to mount them onto something to keep them straight.  I dropped into Eckersley's at Milton one afternoon and purchased a piece of foam core large enough to mount all 8 images.  I think in the end it was a 30inch by 40inch piece.  It was around the $20 mark.  I bought a really long steel ruler as well as a cutting knife and I also purchased some adhesive.....boy was that expensive!  $45 just for the adhesive!!!!!  The shop assistant assured me it was the best thing for the job. 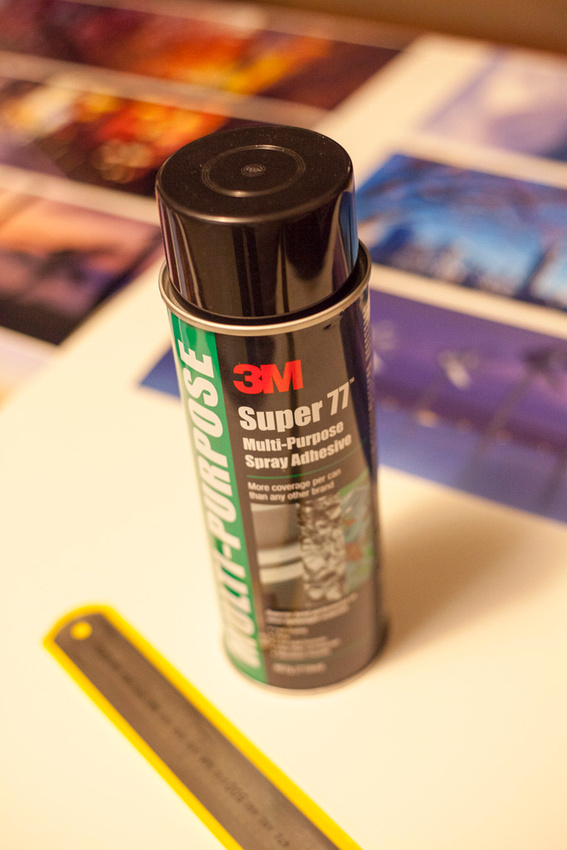 I lay out all of the images on the foamcore and ruled lines where to cut each. 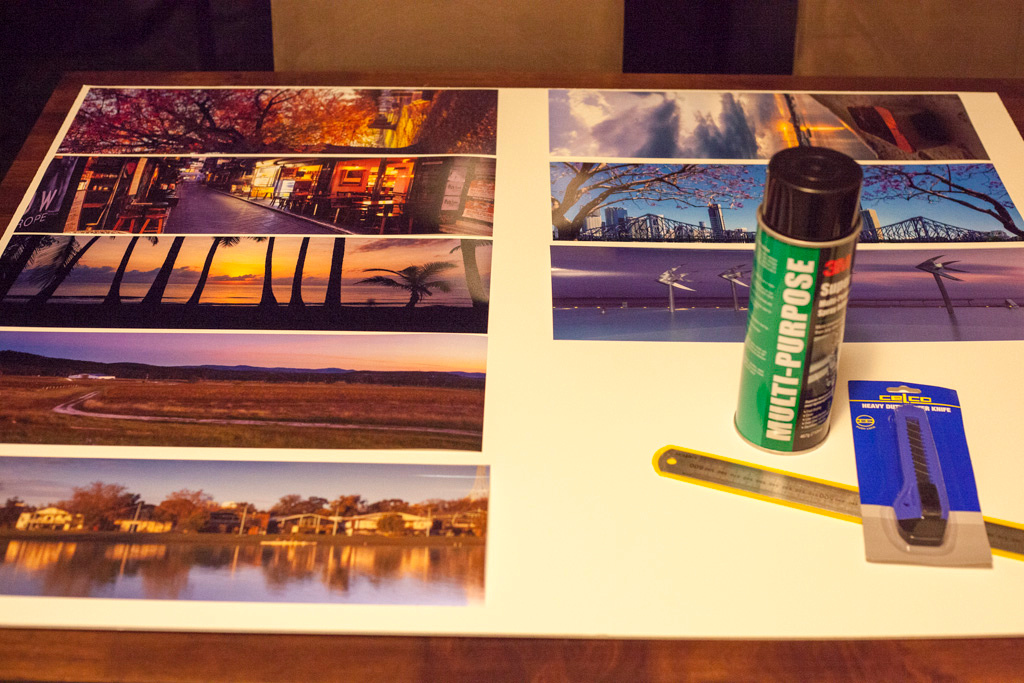 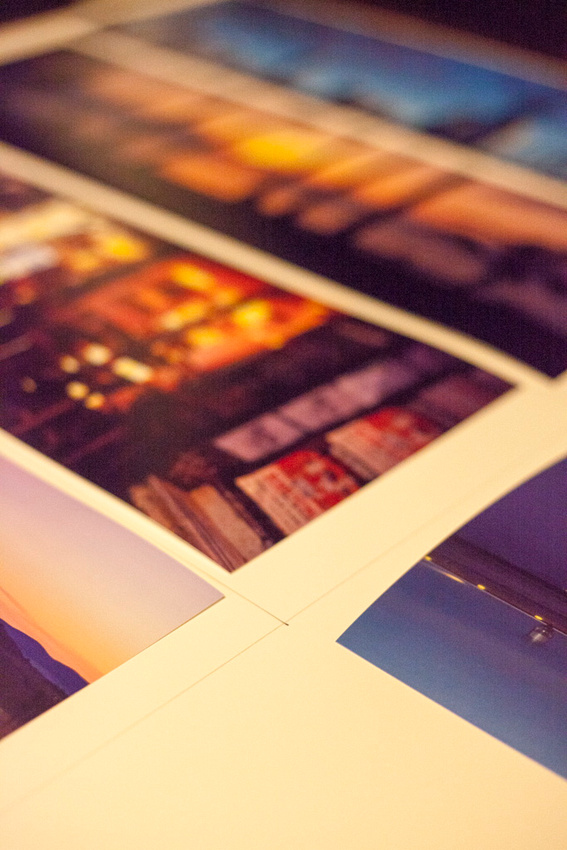 I cut each out and proceeded with the glue-ing phase.  Knowing this glue was quite effective, I set up a table outside off to the side with newspaper on.  I changed the newspaper after each image to ensure the photo didn't stick to the newspaper. 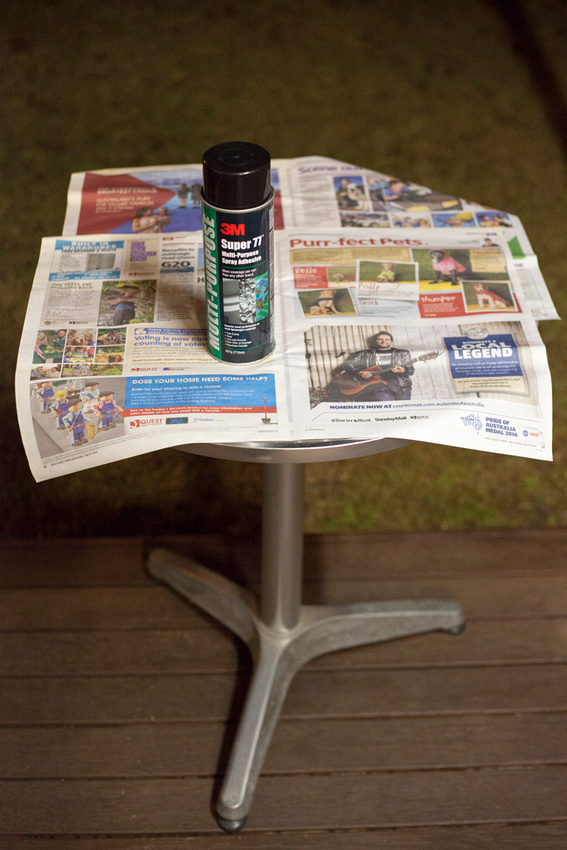 I sprayed a thin coat on the back and then carried the image over to place it on the foamcore. 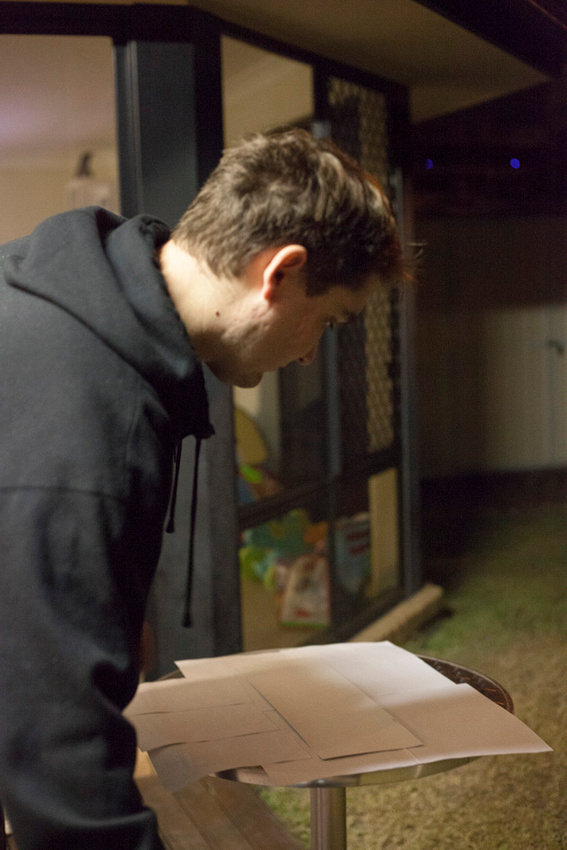 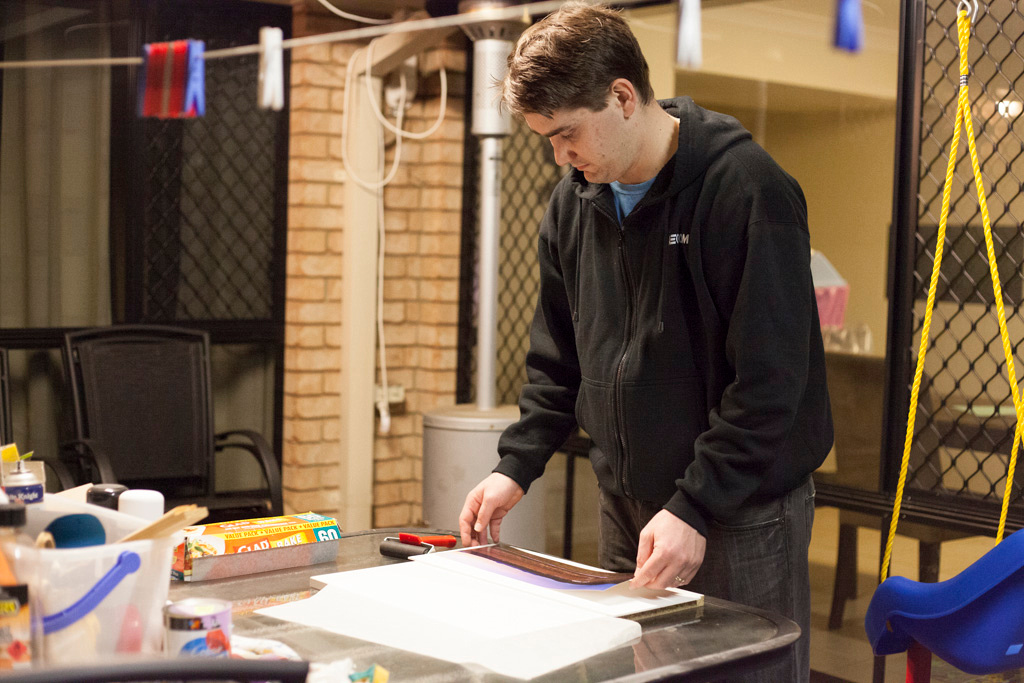 I wasn't too concerned if the image was centred on the foamcore or not as my intention was to trim each neat with the image, however based upon the below picture it looks like I was still a little concerned! 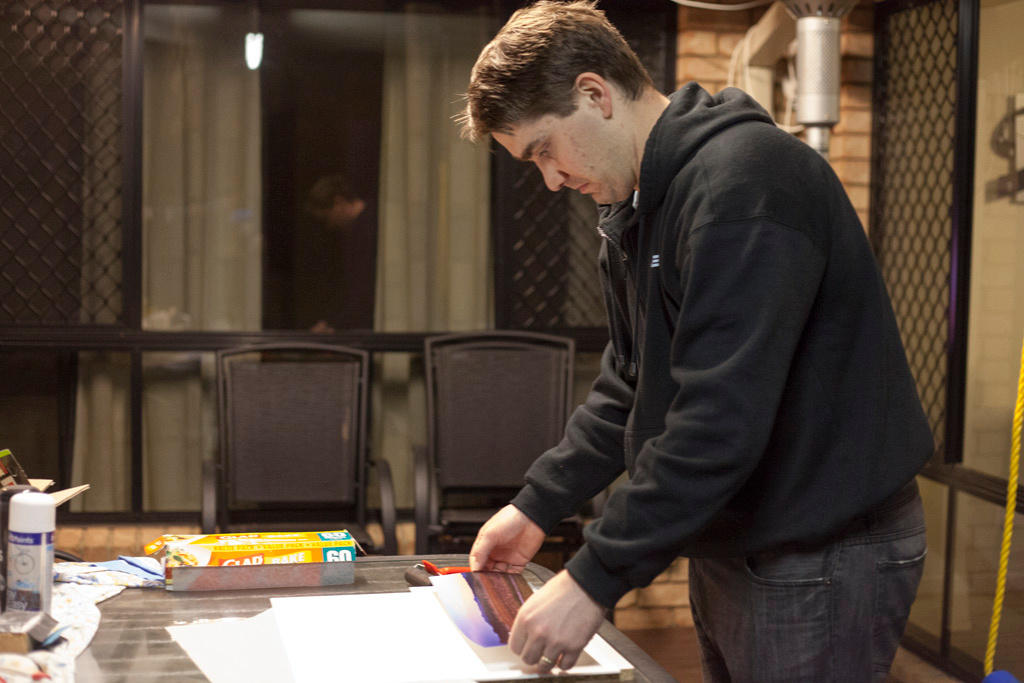 I then used a piece of baking paper over the top of the image and a roller to roll from the centre out toward the edge to ensure the image stuck.  I used the baking paper to ensure I didn't damage the image by directly contacting it with the roller and so that if there was any glue spillage I wouldn't roll that back onto the photo. 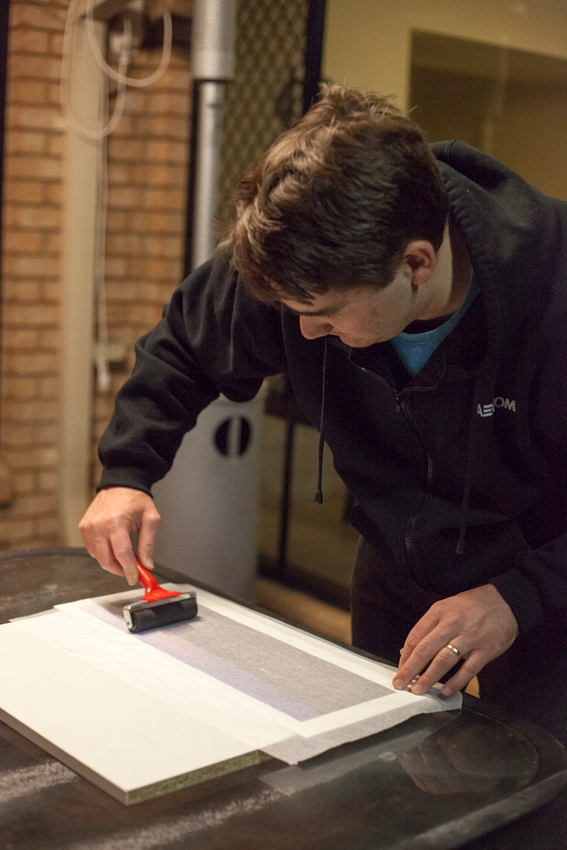 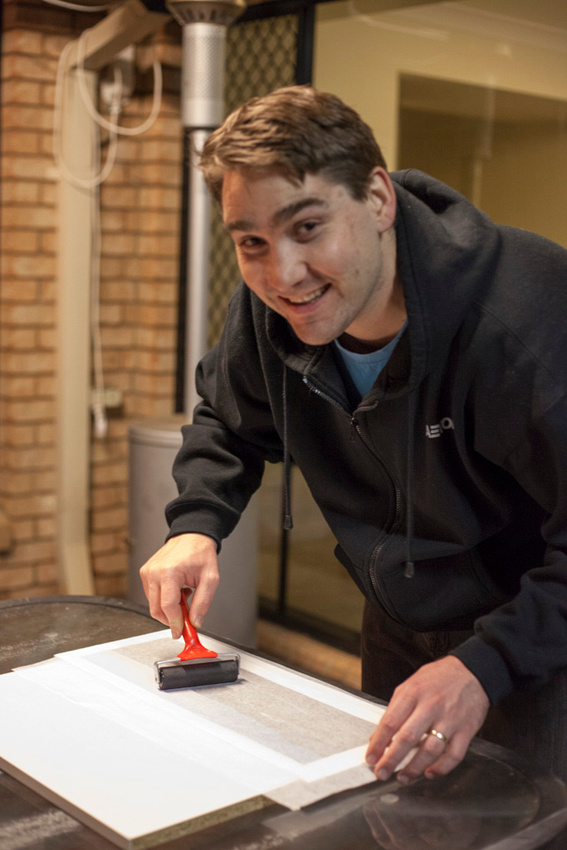 And I had a mounted print! 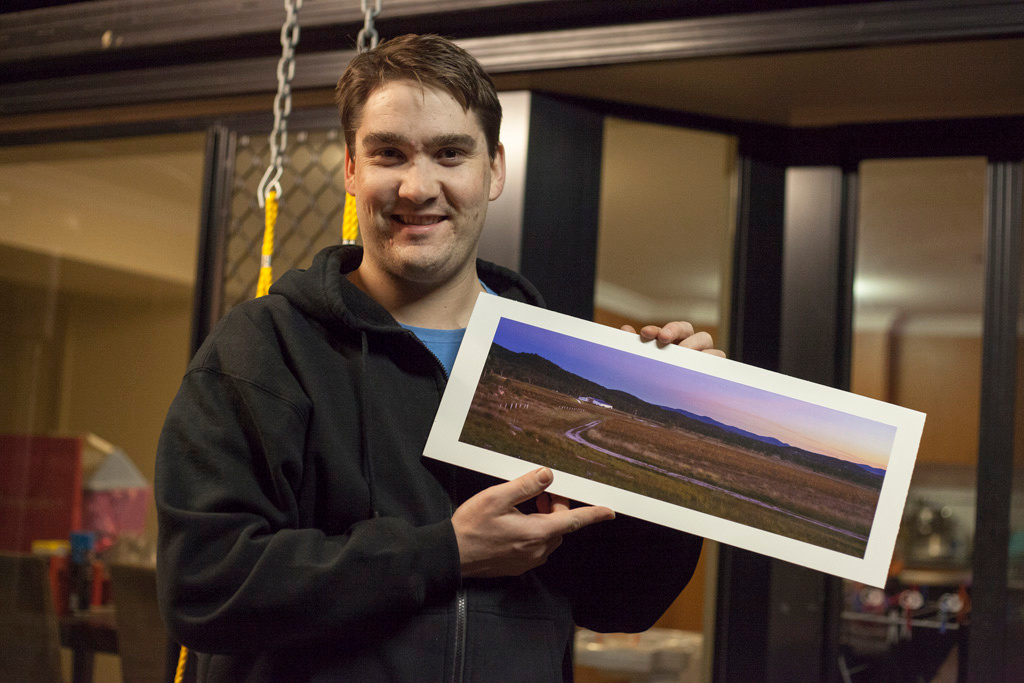 After doing this for every print, I had 8 mounted prints! 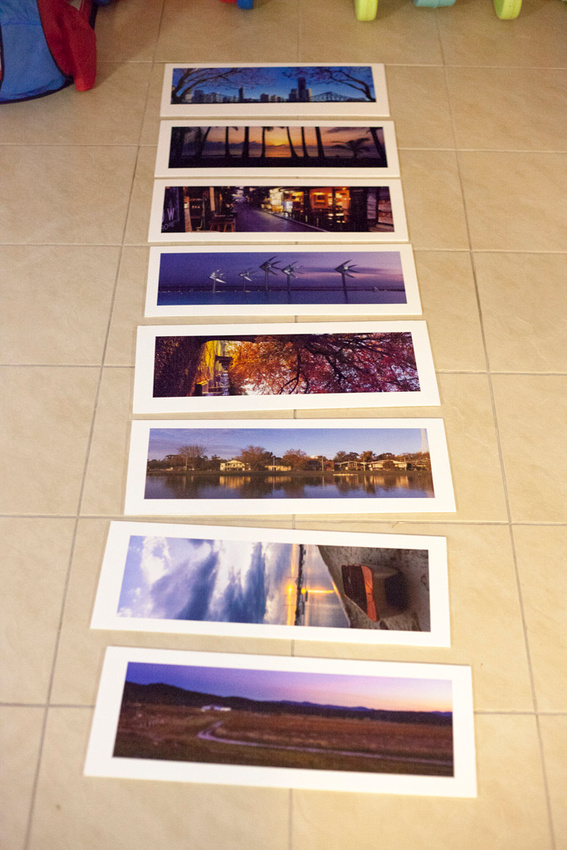 To finish off my frames, I placed a small mount in the centre at the back of the frame so I could hang them on the wall.  I then trimmed each picture, pegged them into the frame and they were complete! 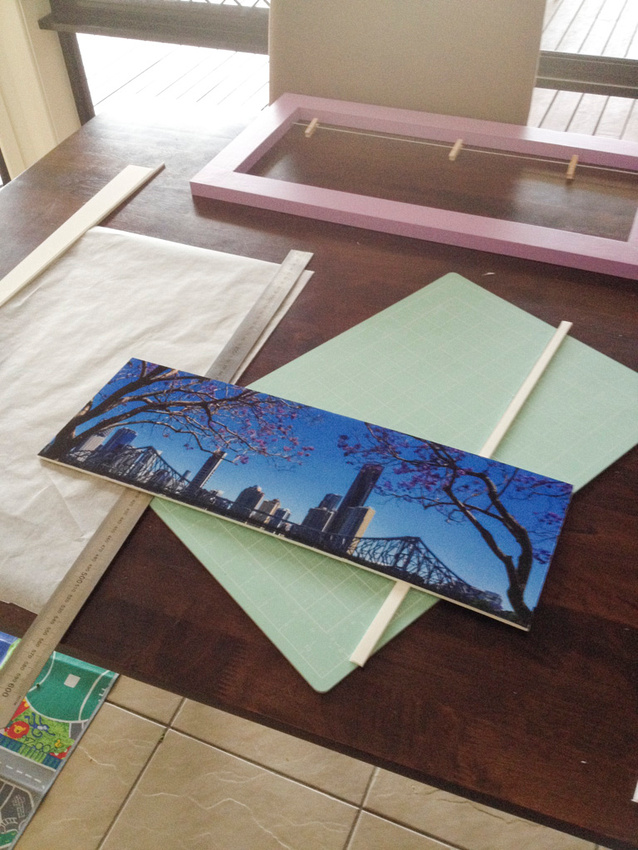 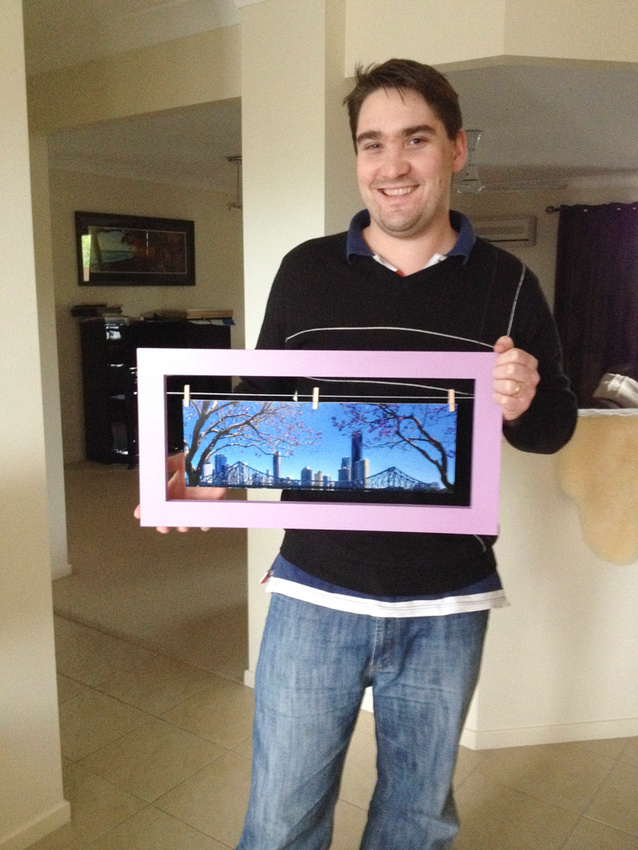 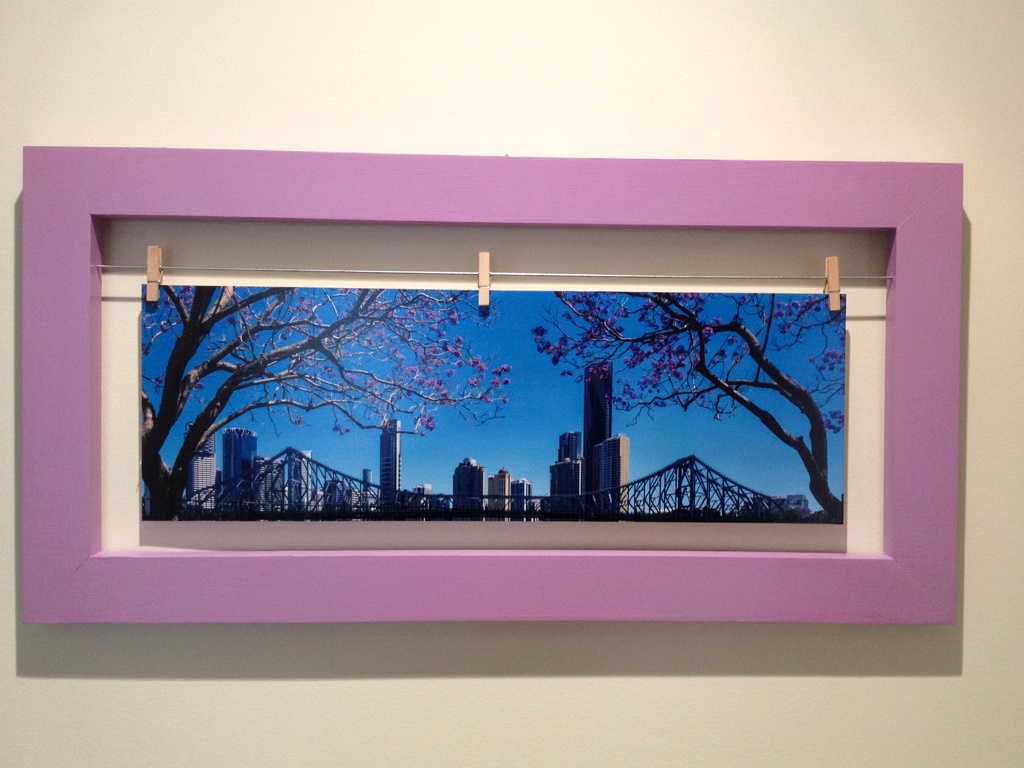 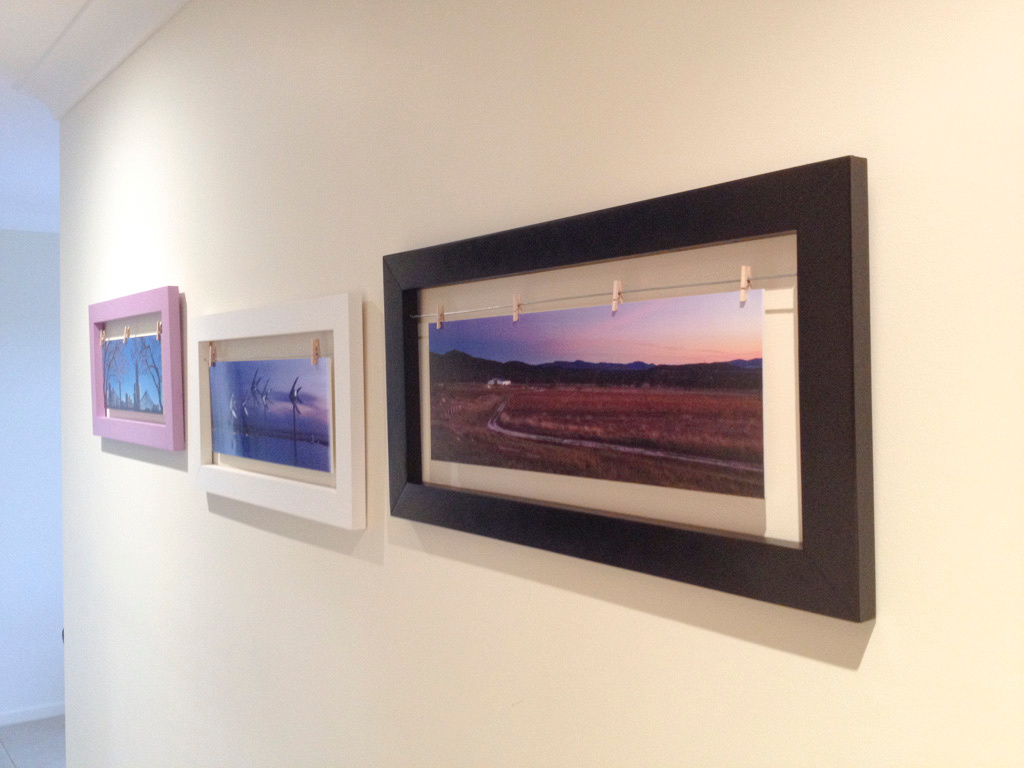 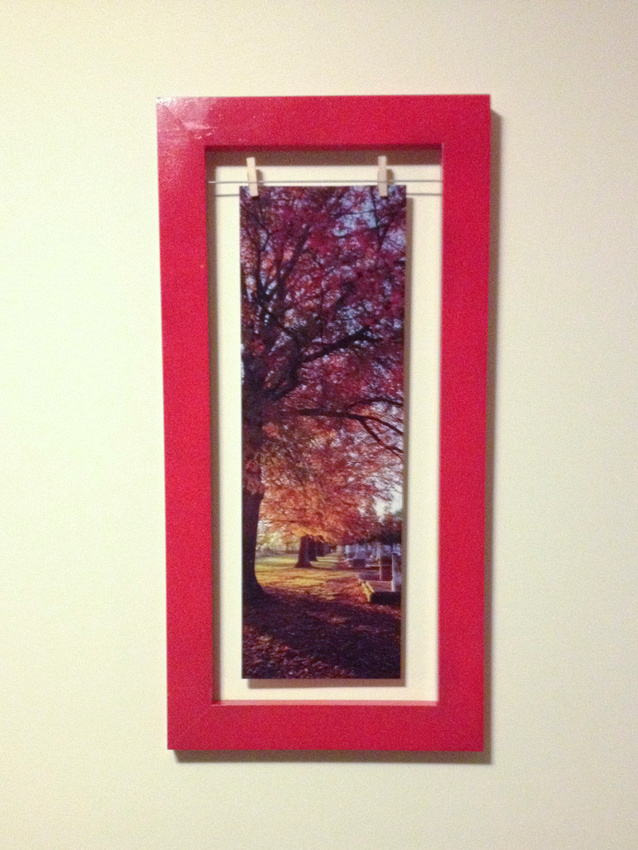