My first experience with a medium format 617 film camera

Yesterday afternoon I met up with a fellow photographer Kane Gledhill to photograph some medium format 617 film.  I have followed Kane's photography for probably 4 or 5 years now and I really like his work.  I first came across it on the OCAU photography forum and later through Flickr and now I follow his Facebook page.

In February this year we struck up a conversation as I was looking into having someone do some framing work for a print I wanted.  (He offers custom framing in case you are interested).  Anyway, somehow the conversation got onto talking about 617 film cameras.  I had seen a relatively cheap Fotoman 617 on eBay which I linked him to.  He had been keeping an eye on the same auction....anyway roll forward a few days and he had won the auction!  We decided that we would meet up one day to "shoot some frames".

We used a Fotoman 617 today with a Schneider 90mm f5.6 lens.  We had a Schneider center grad 1.5x and some Cokin Pro grad filters. 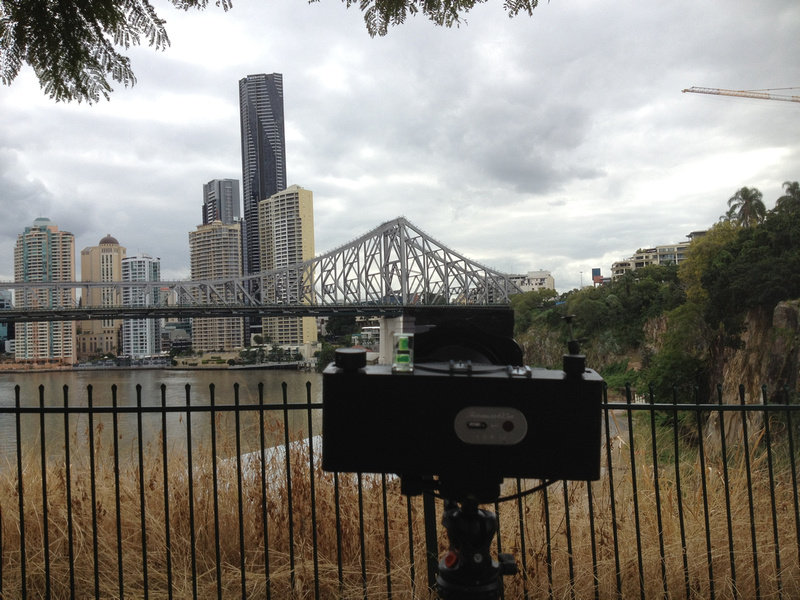 My first impressions were that this was a big camera.  It was huge!  It measured about 30cm wide!  I had seen pictures of them before but I had never realised how big they actually were!

We spent about and hour and a half photographing..... we took 4 photos...yes ONLY 4 photos - that is 1 roll of 120 medium format film.  It is a timely process to compose, make sure the camera is level, choose your aperture, setup any filters you want to use, meter the light, wait for the right moment (e.g. boat coming into the scene), cock the shutter, and then fire the shutter...... oh and then wind the film on.

The other thing which was incredible was that this camera had no electronics what-so-ever.  It was all manual.  No battery in site!  Basically it was a lens, a shutter and a box to hold the film.

This is a format which I have been reading up on a lot over the last year or two.  When Chi and I headed to Tasmania in July 2012 we considered hiring one to use but we couldn't find somewhere to hire one from.  Seeing the camera yesterday and how it works has made me want to consider this format even more.  I suppose we won't see the results of our images until they are back from the lab, but it was fun, exciting and something I would like to try again.

I suppose this is a very good question that a lot of people may ask, particularly in this digital age.  Since my interest in photography started about 7 years ago I personally have only ever photographed digital.  When I was a kid and digital cameras didn't exist, I remember having a little point and shoot 35mm film camera.  It had no manual functions at all.  It was literally press the button and you get a photo.

The closest I have got to shooting film was using my Dads Canon AE-1 film camera.  It has sat at my Mums place since he passed away 17 years ago.  Unfortunately she threw the body out earlier this year but I still have the lenses at home.  I used this camera once in my early teen years.  My brother and I took it to the cricket at the 'Gabba and used the zoom he had to take some photos.  We had them developed and they were all quite blurry.  I remember talking to Mum about it and she thought the camera needed some servicing.  In hindsight, it was probably a combination of low light, small aperture and too slow of a shutter speed.  Either that or my brother and I didn't know how to focus properly!

I think photographing using film will teach me a bit more discipline with my photography.  I think it will help me to look at a scene and consider the composition before taking a shot rather than firing off heaps digitally.  On average I expect that each time the shutter is pressed using a 617 camera it costs $4.  That is $1.50 for the film and $2.50 for the developing (and that is cheap....some places it is $6 to develop 1 shot).

I also feel that I am getting a bit bored with some of the classic locations in Brisbane.  I find I am always going to the same spots as I don't have the time to scout for new ones or I just know it is safe to get a shot.  I think being able to re-visit a lot of these places to photograph on film will be more enjoyable rather than just getting the same old digital shots.

There is just something about film photography.  Jack Chauvel is a photographer in Sydney who uses a fair bit of film.  I like his work.  I think the detail and just the look of his film work also inspires me.

The other advantage is that prints of a 617 transparency can be made quite large (i.e. 60 inches wide) if high-res scans are done.  Currently digital is probably limited to ~40 inches.

Some of my favourite photographers have or still do shoot panoramic film cameras (i.e. 617 format).  These include Mark Gray and Ken Duncan.  I love looking at panoramic images and the advantage of a format such as this is that you can compose and see exactly what you want using the viewfinder on the camera.  These days with automatic stitching software it is quite easy to create a digital panoramic image.  However, if you are photographing a scene where this is a lot of movement such as waves or fast moving clouds it can be difficult to capture and stitch digitally.  Another advantage of a 617 format film camera is that you can see using the eye-piece exactly what you want to get.  You can compose easier and hopefully get exactly what you want on the film.

I enjoyed the experience yesterday.  I think it is something I would like to try again.  Let me assure you I will still keep my digital gear, but having a camera that is different which will be able to help me capture the beauty of creation in another way excites me.

I have bought some film and have been keeping an eye out on eBay and other sites for a 617 to come up.  If I am fortunate enough to buy one then that's great.  If not, I'll just have to rent Kane's.

Kane Gledhill(non-registered)
It was a good day mate, 4 shots in 2.5 hours is crazy hey!
Gary Irving(non-registered)
Martin,
I purchased my first 617 format camera back in '85 or'86.It was was Fuji's first panoramic offering,the G617Panorama.I shot a couple books with it,picked up a first generation Linhof Technorama 617 with a wider 90 f8 Schneider Super Angulon,the finally settled on a second generation Linhof,the 617s.I never had much interest in the third and current model The Linhof 617 Technorama III that offers interchangeble lenses.I love the one camera,one lens experience and the elegantly cinematic feel of the 3:1 ratio FILM images.Perfect camera for the way I see,and perhaps you as well!Enjoy some great experiences with your camera.
No comments posted.
Loading...
© Martin Canning
Powered by ZENFOLIO User Agreement
Cancel
Continue